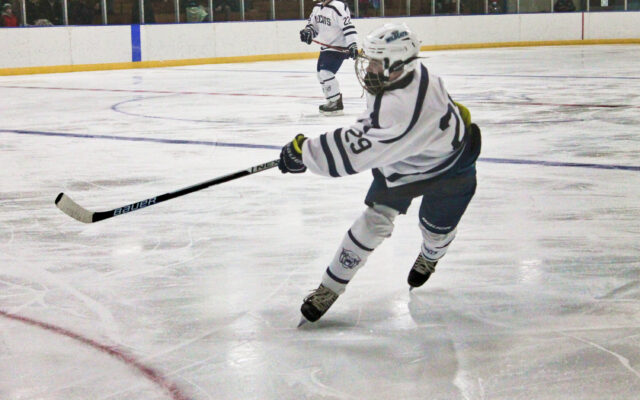 Presque Isle hockey setting up for success this season

David DiMinno • December 23, 2021
After focusing on experience last eason, the Wildcats are hoping their focus on improvement will pay dividends this hockey season.

PRESQUE ISLE, Maine — After focusing on experience last season, the Wildcats are hoping their focus on improvement will pay dividends this hockey season.

Carly Flynn has been the hockey coach for the Wildcats for 17 years. He has also had experience coaching minor league hockey in Presque Isle, as well as coaching in Kingston, Ontario, Canada.

Last season, the Wildcats held a record of 4-7, and lost in the quarterfinals against Hampden Academy, who would eventually be the regional runners-up.

So far this year, the Wildcats are at 1-1 on the season.

Defensively, the Wildcats need to fill the void left by defensive players Noah Roy, Caleb Levesque and Brandon Poitras, who were all lost to graduation last year.

Similarly to other sports this season, COVID-19 had posed several problems for the Wildcats on the ice.

“Covid has already struck us hard this year,” Flynn said. “We have had as many as 12 players in quarantine at one time.  It makes it very difficult for us to work on strategy and team systems, such as power play and penalty kill.”

According to Flynn, the Wildcats are looking to improve on taking care of the puck and bolstering their play in the defensive zone as the season progresses.

Flynn is optimistic about the team’s offensive ability, citing it as one of the main strengths of the team. Flynn also says the Wildcats have three lines that can be played at almost any time.

“I am very optimistic for this season,” Flynn said. “We have a deeper team offense  than I was expecting.  We are young and inexperienced on the defensive end of the rink, but we have potential to get better quickly.”

Flynn said that Orono, Old Town, and Hampden Academy will be the teams to watch out for this season, and will pose the greatest competition to the Wildcats.

A familiar face to Aroostook County residents has announced her candidacy for the Maine State Senate.
Pets END_OF_DOCUMENT_TOKEN_TO_BE_REPLACED

When 14-year-old Isaiah Belyea of Caribou began volunteering for Halfway Home Pet Rescue three years ago, he never imagined that his love for animals would quickly turn into a budding career.
What's Happening This Week END_OF_DOCUMENT_TOKEN_TO_BE_REPLACED