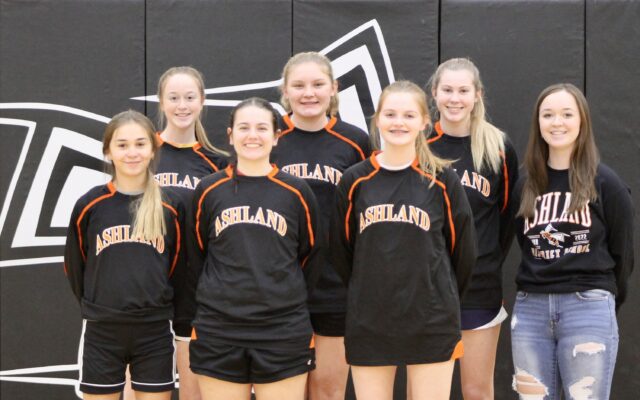 Ashland aims to be competitive this season

David DiMinno • January 8, 2022
Forging a young team into a competitive roster of players is Coach Diana Trams’ goal for the upcoming basketball season.

ASHLAND, Maine — Forging a young team into a competitive roster of players is Coach Diana Trams’ goal for the upcoming basketball season.

This year marks Trams’ third year coaching for the Hornets, with an impressive resume of four seasons coaching for Washburn, and three of those seasons resulting in Class D championship victories.

The Hornets had a record of 4-8 last season, and lost to Washburn in the first round of the Aroostook County playoffs.

“We need to work on game awareness and knowledge once players have more experience and build confidence,” Trams said. “This group has not played together much so I am hoping as the season progresses they will be more comfortable with one another and have an understanding of what their role is on the team.”

Members of the 2021-2022 Hornets include senior Mia Carney, who tore her ACL during the soccer season, and will be acting as the team manager; juniors Kaili Condon, Yasmeen Hutchinson and Kayla Mclean; sophomores Michaela Carney, Abby Doughty and Cailin Brown; freshmen Haily Poulin and Fallyn Ryan.

Returning players include Mia Carney, who was a solid defender and passer last season, will be coming back as a manager. Michaela Carney and Doughty make their return as sophomores. Michaela Carey has made a name for herself as a solid all around player, and Doughty is an exceptional passer and solid shooter.

Hutchinson and Condon return, and have a lot of potential for the upcoming season.

There are currently no frontrunners for starting players. All players on the team have the opportunity to prove why they should be in the top spots.

“I tell the players that each practice is an opportunity to prove yourself and earn that spot,” Trams said.

Ashland is going to need strong players, as they lost 5 starters from last season. Willow Hall, Jamie Poulin, Danni Carter and Hailee Cunningham were all lost to graduation.

Looking at the competition, Trams anticipates that Southern Aroostook, Wisdom, and Katahdin will be strong opponents to look out for in the upcoming season. Ashland continues to remain in Class D.

COVID-19 has posed many complications to several teams in Aroostook county, but the Hornets have faced those challenges, and choose to look on the bright side of things.

“It’s tough but everyone is doing the best they can and dealing with the same circumstances to a similar degree,” Trams said. “We choose to focus on the positive aspects of the situation and highlight what is going well. We also discuss what happens when obstacles arise and what we can do in the face of adversity.

“The lesson is the same even if the situation is unique and frustrating at times,” she continued. “From a coaching perspective, I recognize that student athletes right now may not have the bandwidth to be their best selves’ day in and day out. The most important aspect of the season in my opinion is to look at this as an opportunity to connect with one another, learn and grow in a supportive environment and encourage our teammates to help them reach their potential.”

For the first time since 2019, there is competition for open seats on the Houlton Town Council
Pets END_OF_DOCUMENT_TOKEN_TO_BE_REPLACED

We hope everyone enjoyed a wonderful holiday season and is looking forward to the new year.  December was a busy month at the Central Aroostook Humane Society with so many people and businesses bringing in much-needed supplies and monetary donations, which help us to take care of the special temporary pets in our care.
What's Happening This Week END_OF_DOCUMENT_TOKEN_TO_BE_REPLACED