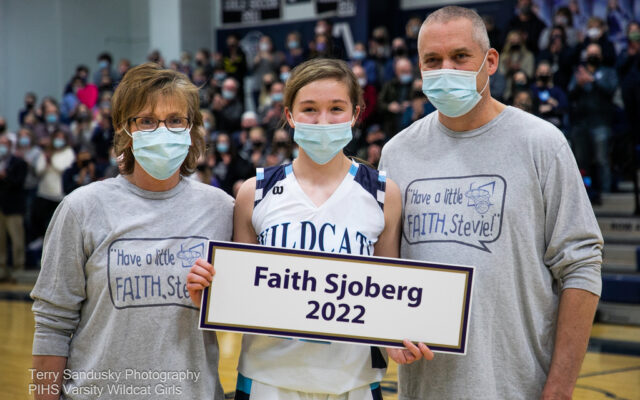 David DiMinno • March 1, 2022
Sjoberg’s achievement capped a final season for the PI girls team in which she repeatedly demonstrated her leadership and impressive skill on the court.

PRESQUE ISLE, Maine — Nineteen players, both boys and girls, had scored 1,000 points in their basketball careers at Presque Isle High School prior to last week. On Feb. 15, in a game against Belfast High, senior guard Faith Sjoberg became the 20th Wildcat player to reach the mark.

Sjoberg’s achievement capped a final season for the PI girls team in which she repeatedly demonstrated her leadership and impressive skill on the court.

“This milestone means everything to me,” Sjoberg said. “I’ve worked my entire life to be where I am today, so being able to have my name on the wall to show for it is very rewarding. One thousand points is just a number, but the time and dedication put in to reach this goal is what made it so meaningful.”

Sjoberg began playing basketball when she was five years old, instantly falling in love with the sport, but only taking it seriously when she got to high school. With each game, Sjoberg said she was inspired by her mother Susan. Susan did not play basketball, but her dedication to her work and family inspired her daughter each day.

“She never misses a single game that I play in, and she’s often the loudest one in the gym,” Sjoberg said. “Her constant support inspires me to be the best version of myself, and to give each game everything that I have.”

Teammate and Wildcats captain Annalise Jandreau reflected on playing with Sjoberg. The two have been friends since the fourth grade, and have watched each other grow over the past eight years.

“We traveled together often, played in many weekend tournaments, and won a lot of championship games throughout our time,” Jandreau said. “I’ve seen Faith grow as a player and as a person, so it was really special for me to see her reach her goal of scoring 1,000 points. She is the most selfless and dependable player I know, and is an admirable person as well.” 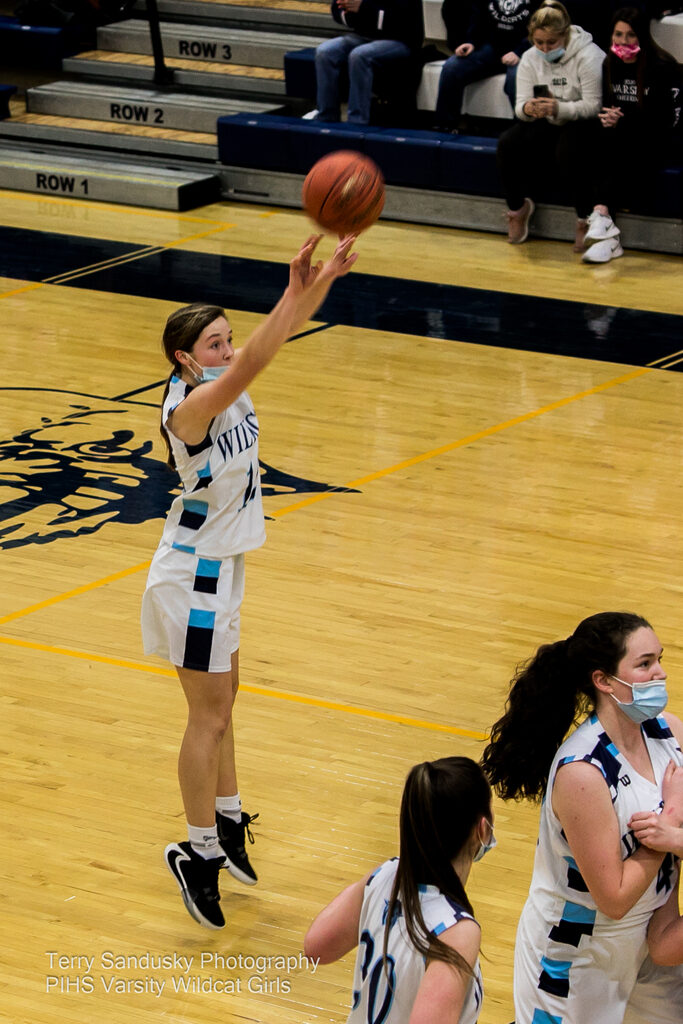 Faith Sjoberg taking a shot that would be her 1,000th career point in basketball. (Courtesy of Terry Sandusky)

Presque Isle girls basketball coach Jeff Hudson cited Sjoberg as a talented and humble player who cares deeply about the well being and success of the team and her teammates. He also said that Sjoberg has a knack for making the “big” shots when they are needed most.

“It was fantastic to see Faith score her 1,000th point the other day,” Hudson said. “Faith started off as just a shooter and has developed into a very good overall player. She can still shoot, but she also drives to the basket, makes plays for teammates, and is actually very good defensively.”

Sjoberg said she is thankful for her family, coaches, and teammates, who have all supported her and helped her grow during her time with the Wildcats. According to Sjoberg, the encouragement, lessons, teamwork, and support from all parties led to her success.

In her final season, not including this year’s tournament, Sjoberg made 57 two-point shots, 19 free throws, and 47 three-pointers for a total of 274 points. She also had 55 rebounds, 37 steals, and 31 assists.

Moving forward, Sjoberg plans to attend Husson University in Bangor in the fall where she will study physical therapy and be a part of the school’s basketball program.

Forbidden foods for our four-legged friends are many and can be very dangerous if ingested. Sometimes, we give our pets leftovers or what we consider treats. According to many sources, some human foods can make an animal very sick, and in certain cases can even be lethal.
What's Happening This Week END_OF_DOCUMENT_TOKEN_TO_BE_REPLACED