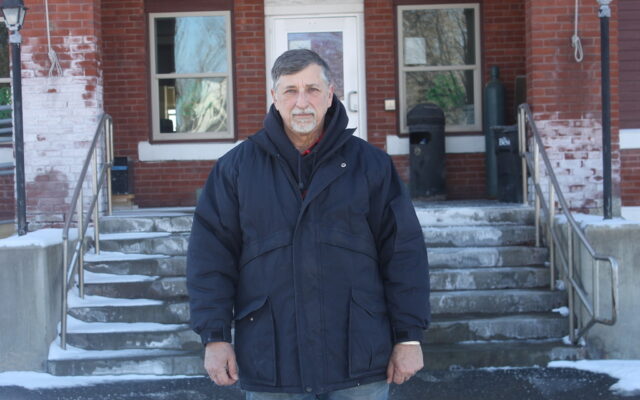 David DiMinno • March 1, 2022
Gubernatorial candidate John Glowa said that he wants to spur government reform that truly creates a system of, by and for the people when he visited Presque Isle City Hall.

PRESQUE ISLE, Maine — Gubernatorial candidate John Glowa said that he wants to spur government reform that truly creates a system of, by and for the people when he visited Presque Isle City Hall.

Glowa spent Saturday traveling through Aroostook County to gather support from residents while talking to them about his campaign as a democratic gubernatorial candidate.

Glowa was born in Presque Isle and lived in the Star City for several years during the 1980s. While he lives in China in Kennebec County, he said he has always considered Presque Isle home.

With 400 signatures, Glowa has not yet reached the 2,000 needed to run as a primary candidate. If he does not obtain them by March 15, he will be unable to run in the primary, making current Gov. Janet Mills the democratic candidate in the 2022 fall election.

While no residents came to meet Glowa at Presque Isle City Hall, he was available there to answer questions in case anyone stopped by.

Glowa’s top priority is government reform, which he plans to accomplish with a three-part plan.

First, Glowa wants to appoint an apolitical task force of outside experts to assess the current government structure, and see what is effective and what isn’t.

Second, he wants to add an internal auditing function in the executive branch that would base its operation in line with the five principles of management: planning, organizing, staffing, directing and controlling.

Third, Glowa wants to change the mindset of state government, leading by example and creating a structure that works for the people, rather than having the people work for it.

“That’s the mindset of a lot of people in government, thinking that the people work for them,” Glowa said. “I want to change that, as well as encourage state employees to be able to speak up and be a part of the process.”

Glowa also said he wants to protect Maine’s children by making the state’s child welfare system the best in the nation.

Glowa is in favor of solar energy, provided that it is properly sited and not environmentally harmful. He claims that the current climate action plan for Maine is a “fantasy” because it calls for 219,000 electric vehicles in Maine by 2030. He said the goal is not realistic because electric vehicles are not optimal in certain parts of the state.

One of the biggest issues for Aroostook County is retaining population, Glowa said.

“Small business is the backbone of Maine’s economy,” Glowa said. “If we can teach our young people how to start a business, how to run it and how to be profitable, maybe they will stay in Aroostook County.”

He suggested that hiring immigrants could be a good solution for employers who have gaps in staffing to fill. He also said that instilling a greater work ethic in communities could help get more young people into the workforce.

Glowa finished his day in Houlton, with plans to travel to Washington County on Sunday.

A familiar face to Aroostook County residents has announced her candidacy for the Maine State Senate.
Pets END_OF_DOCUMENT_TOKEN_TO_BE_REPLACED

When 14-year-old Isaiah Belyea of Caribou began volunteering for Halfway Home Pet Rescue three years ago, he never imagined that his love for animals would quickly turn into a budding career.
What's Happening This Week END_OF_DOCUMENT_TOKEN_TO_BE_REPLACED