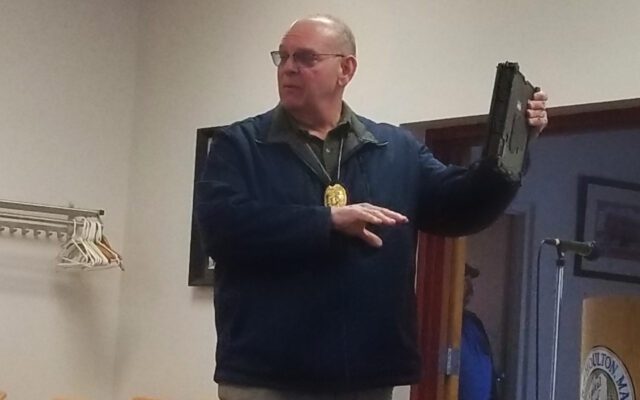 Joseph Cyr • March 16, 2022
New state-of-the-art technology has been added to the Houlton Police Department thanks to a grant from the Putnam Charitable Trust.

HOULTON, Maine — New state-of-the-art technology has been added to the Houlton Police Department thanks to a grant from the Putnam Charitable Trust.

Houlton Police Chief Tim DeLuca told members of the Houlton Town Council Monday that three mobile data terminals have been purchased for officers to use while patroling the streets.

The Putnam Charitable Trust awarded the Houlton Police Department a $16,366 grant in December to purchase the electronic equipment. In addition to the grant, the department used COVID-19 relief funds to cover the expense.

“These would not have been possible without the kind donation of the Putnam Trust,” DeLuca said. “We are quite proud to have these installed and up and running. These are the top of the line mobile data terminals for officers.”

Among the many types of data that officers will access in their vehicles, without waiting for a dispatcher to relay that information, are driver’s license checks, motor vehicle registrations and stolen vehicle inquiries.

“The officers now have complete access to all the data out there from receiving calls for service to mapping their location throughout town,” the chief said. “An officer can run a license status, license plates, the status of an individual person and it also gives alerts if there are any warrants throughout the United States and Maine.”

In the past, the officers would need to call in a person’s details to the dispatcher, who would then check in the department’s database. Now, officers will be able to have that information immediately.

“This can warn an officer about anyone who is wanted or under suspicion,” the chief said. “It’s a tool that has modernized policing. It is long overdue.”

The chief also informed councilors that two officers — Lt. Theron Bickford and Cpl. Mallory Clayton — have both resigned from the department. Their departure leaves the Houlton Police Department with five vacancies.

Bickford was second in command at the HPD and had been with the department for 11 1/2 years. He has accepted a position with the Aroostook County Sheriff’s Office.

Clayton was promoted to the rank of corporal in October 2020. She had been with the HPD since 2017. Clayton has taken a law enforcement position with the East Millinocket Police Department.

“I want to thank both for their service to the Houlton Police Department,” the chief said.

Next year's Caribou City Council will include a new member and a longtime councilor thanks to Tuesday's election.
Pets END_OF_DOCUMENT_TOKEN_TO_BE_REPLACED

Everyone who enjoys the company of a dog knows that sometimes dogs have strange behaviors.  They may arrive in your life with the behaviors already in place, or perhaps they are adopted as a puppy and develop a behavior young.
What's Happening This Week END_OF_DOCUMENT_TOKEN_TO_BE_REPLACED