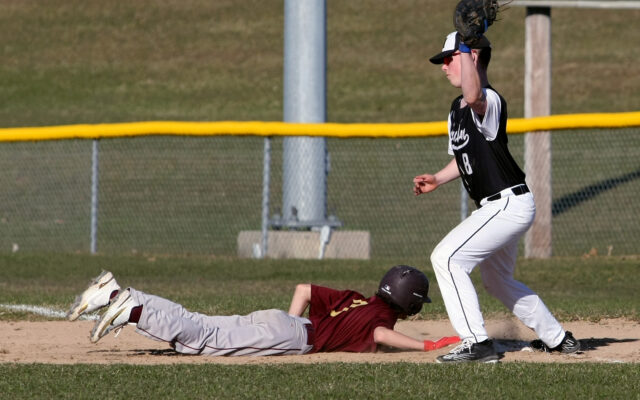 Joseph Cyr • May 9, 2022
It was a busy week for local baseball and softball squads in southern Aroostook County with a bundle of games played over the week.

HOULTON, Maine – It was a busy week for local baseball and softball squads in southern Aroostook County with a bundle of games played over the week.

The following is a recap of those games that were reported to the newspaper. Coaches are asked to submit their results after each game by email jcyr@bangordailynews.com.

Hodgdon 24, Central Aroostook 2 – At Mars Hill Monday, May 2, the Hodgdon softball squad rolled to a commanding 24-2 victory in a five-inning game.

The Hawks were led by Marissa Dow, who scored three runs and pitched a one-hitter, with 10 strikeouts. Meghan Peters had two hits and three runs scored and Delaney Little scored four runs. Little also had a two-out bases loaded catch at first base to end a Panther rally.

Southern Aroostook 28, Fort Fairfield 2 – At Dyer Brook the Warriors rolled to a lopsided victory in five innings. SA scored 12 runs in the first and never looked back, while the Warrior pitching allowed just four hits.

For Fort Fairfield, Kassidy Gorneault and Katie Stairs both singled and scored a run.

Katahdin 23, Washburn 6 – At Washburn Monday, May 2, the Cougars rolled to the big win in a five-inning game. A 13-run rally in the third inning broke open what had been a relatively close contest.

Jeff Martin and Josh Martin combined to allow six runs on nine hits and four walks, with 12 strikeouts on the mound for Katahdin. Jeff Martin led the team offensively with four hits, while Grady Ritchie and Josh Martin both had three hits. Connor Edwards scored four runs for the Cougars.

For Hodgdon, Lucas Matheson tripled, singled, and had three RBI.

For the Hawks, Oisin Gardiner walked, singled, doubled, and reached on an error. He added two RBI and scored two runs.

Houlton 11, Calais 1 – At Houlton Friday, the Shires downed visiting Calais in a six-inning game. Shire Collin Moody was dominant on the mound as he pitched six strong innings, allowing two hits, with 13 strikeouts. Moody helped his cause with a triple, single and two RBI.

Thadon Gentle, Silas Graham, Brock Thompson and Kadan Carpenter each had one hit for Houlton.

The Cougars bashed 12 hits on the day, with Jeff Martin leading the way with three doubles. Justin Hurlburt, Josh Martin, Kyle Mann and Connor Edwards each had two hits.

A familiar face to Aroostook County residents has announced her candidacy for the Maine State Senate.
Pets END_OF_DOCUMENT_TOKEN_TO_BE_REPLACED

When 14-year-old Isaiah Belyea of Caribou began volunteering for Halfway Home Pet Rescue three years ago, he never imagined that his love for animals would quickly turn into a budding career.
What's Happening This Week END_OF_DOCUMENT_TOKEN_TO_BE_REPLACED