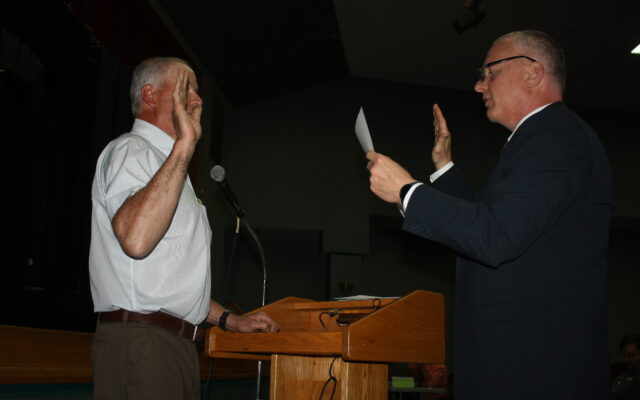 That total represents a 5.1 percent increase over last year’s budget of $19,814,324. Caribou and Stockholm residents will now be able to approve the budget during a referendum vote on Tuesday, June 14.

Nearly 40 people, including school staff and board members, attended the district budget meeting, held at the Caribou Performing Arts Center on May 25. They unanimously elected Caribou resident Frank McElwain to serve as moderator. Doak swore in McElwain and then McElwain swore in central office executive secretary Laurie Chapman as the ballot clerk.

Since RSU 39 wants to spend more than the recommended amount from Maine’s Essential Programs and Services, the district will need to raise an additional $847,737. In a written ballot, residents approved the funds 25-6.

RSU 39 residents also approved the transfer of up to $200,000 in possible tuition monies to the district’s capital reserve fund. The approved article puts aside those funds in the event that ninth-grade students from the neighboring town of Limestone attend Caribou High School this fall.

With Limestone no longer part of RSU 39, the Caribou and Stockholm district receives tuition from each student who attends CHS. Though RSU 39 does not yet know if Limestone ninth-graders will enroll next year —  since they also can choose to attend Fort Fairfield High School — Doak expects that the district will know in the coming weeks.

Limestone tuition typically brings from $160,000 to $170,000 to RSU 39, Doak said. That means the approved funds could go toward the $712,000 total cost of paving the CHS parking lots without raising the fiscal year budget or tax commitments. The tuition funds for this year would allow the district to begin paving at CHS this summer.

“That school has needed to be paved for years. We’ve patched spots here and there, but this would be a complete overhaul,” Doak said. “We typically find out about Limestone [students] late in the game, so instead of putting the amount on the budget, we’re putting it in the reserve account.”

Doak also discussed how the district has spent most of its $1.5 million from the second round of federal Elementary and Secondary School Emergency Relief funds to build a new running track at CHS, upgrade the CHS science labs and pay overtime wages for nursing, custodial, information technology and ed tech staff during the pandemic.

Many staff positions that were created through the ESSER funds will either be gradually built back into the yearly budgets or eliminated in order to save costs. One of those positions — a school resource officer at CHS — will be eliminated this coming fiscal year.

“[The ESSER funds] were the only way we could fund that position,” Doak said.

RSU 39 plans to use part of its $3.4 million in ESSER’s third funding round to create an outdoor classroom and make several upgrades at Caribou Community School, including an exit door for the Teague wing, a safety gate for the pre-K playground, outdoor restrooms and protective netting around the soccer field to prevent balls from going onto Bennett Drive.

Doak credited the ESSER funds with helping the district complete important capital projects during the pandemic without raising taxes.

Despite notable increases in electricity, building and bus fuel and propane, the district was able to reduce the initial budget of $22.3 million thanks to the elimination or reduction of staff positions, including creating a district librarian position to replace the high school librarian position.

Next year's Caribou City Council will include a new member and a longtime councilor thanks to Tuesday's election.
Pets END_OF_DOCUMENT_TOKEN_TO_BE_REPLACED

When I wrote the first story of our dog Odie, I didn’t know that I would write a Part 2, but there were so many more stories that I decided more of this little dog’s story needed to be told.
What's Happening This Week END_OF_DOCUMENT_TOKEN_TO_BE_REPLACED