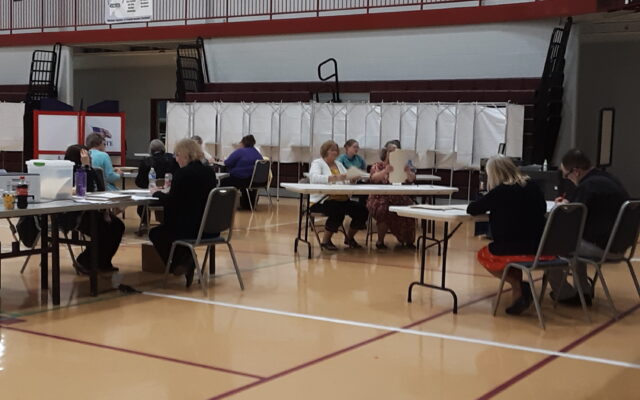 Melissa Lizotte • June 15, 2022
Voters in Caribou approved various referendum questions Tuesday, including those concerning the local school budget and the fate of a new police station.

CARIBOU, Maine — Voters in Caribou approved various referendum questions Tuesday, including those concerning the local school budget and the fate of a new police station.

A majority of Caribou residents — 730 — also voted in favor of keeping the budget validation referendum process in place for at least another three years, with a vote of 730 to 284.

In perhaps the most controversial vote of the night, voters approved Question 4, which asked if they would approve the city spending $10 million to construct a new police station, with a tally of 593 to 418.

The passage of Question 4 marks the next step toward moving the police staff out of a space, located in the municipal basement, that has had structural and plumbing issues and lack of sufficient storage space for years.

Those who voted no believed that the $10 million cost was too high a price for local taxpayers. Richard Learnard of Caribou said he agreed with city councilors who advocated for renovating a different building instead.

“I think there’s [a building] out there that could be retrofitted,” Learnard said. “We all know the cost [for taxpayers] is going to be higher than $10 million.”

But people in favor of Question 4 said that the money is worth spending on a police department that desperately needs new headquarters.

“It’s time to invest in a new building, especially with how much we ask of our police officers,” said Kent Phair of Caribou. “I think a new building would help us retain and recruit new officers.”

The police referendum encouraged more voters than usual to turn out for the local elections, City Clerk Danielle Brissette said.

She and volunteer election clerks saw 1,003 voters out of a total of 5,638, which represents 18 percent of Caribou’s registered voters.

“We’ve had a huge turnout. People have been coming throughout the day,” Brissette said Tuesday evening.

Voters were in favor of Question 3, which has its roots in the police station discussion. That question asked if the city should require capital improvement projects to receive votes from at least 65 percent of Caribou’s registered voters to move forward. The vote was 576 in favor to 413 opposed.

Prior to Tuesday’s election, the city’s charter only required that proposed capital projects of at least $500,000 go to voters for approval.

A majority of voters also approved Question 1 and 2 on the local ballot, which concerned other amendments to the city’s charters.

Question 1 concerned city council vacancies in the event that a councilor leaves before their term expires. The amendment, which garnered approval from 818 voters over 188 opposed, now requires the council to fill vacancies within 60 days instead of 30.

The council must also provide a 14-day public notice of the vacancy and post an invitation for letters of interest. Those rules apply to all councilors, including the mayor and deputy mayor, who must also be elected by a majority of the council.

Question 2, which passed 870 to 144, says that the city council will annually elect members of the library board of trustees for three years instead of five.

In the Republican primary, Bruce Poliquin received 317 votes in the race for District 2 against his opponent Elizabeth Caruso, who received 195.

Jared Golden, who ran unopposed in the Democratic primary, is set to face off against Poliquin once again for District 2. Golden received 264 votes from Caribou.

Those running unopposed in the Republican primaries included Timothy Guerrette (475 votes), who will run against Rossignol for House District 4, Darleen Guy for Register of Probate (451 votes); and Melissa Richardson for Register of Deeds in Aroostook’s southern district (454 votes).

June is generally a month that also marks the height of “kitten season,” when large litters of kittens are born and often end up in animal shelters.   Luckily, here at the Central Aroostook Humane Society, we have seen a dramatic drop in the cat population over the past five years, mostly due to our spay and neuter program.
What's Happening This Week END_OF_DOCUMENT_TOKEN_TO_BE_REPLACED