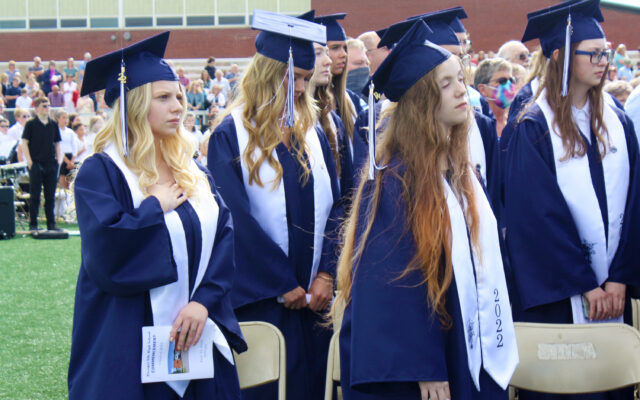 PIHS alum, staff encourage graduates to use failures as launchpads for future success

Melissa Lizotte • June 15, 2022
As the 99 graduates of Presque Isle High School listened to various speakers on Saturday, many might not have expected to hear that they should embrace failure as well as success.

PRESQUE ISLE, Maine — As the 99 graduates of Presque Isle High School listened to various speakers on Saturday, waiting excitedly for their diplomas, many might not have expected to hear that they should embrace failure as well as success.

But that’s exactly what happened during that sunny day on the middle school soccer field, where 1983 PIHS alum Mark Hamlin stood onstage, telling them how his reaction to failures, rather than the failures themselves, have defined his life’s happiness.

Hamlin is now the vice chair of anesthesiology at The University of Vermont Medical Center. Before he joined the ranks of others in the medical field, Hamlin was a high school graduate who had little interest in academics.

“Out of 234 students in my class, I was No. 100,” Hamlin told the 2022 graduates, referring to his class rank. “But my talk today is for all of you, because your class rank does not determine what you can become in life.” 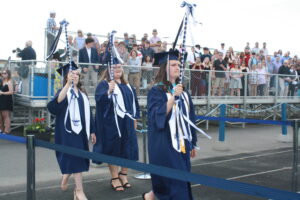 For the first year of college, Hamlin put as much effort into his classes as he did at PIHS. But his father’s cancer diagnosis the following year encouraged Hamlin to work harder, leading him to make the honor roll and apply to medical school.

Hamlin’s most significant failure at that point came when all medical schools he applied to rejected him.

Instead of giving up, he continued applying and later earned both a master’s in pathology and a medical degree from the University of Vermont. He said that he succeeded in part because he openly discussed his failures with colleagues.

“When you admit failure, people will tell you that they’ve also had failures and they’ll help guide you as you go for your goals,” Hamlin said.

As students prepared to pursue their goals, Hamlin reminded them that finding what makes them happy might involve changing their minds and trying new things. It might also involve the challenge of distinguishing between a job that they perform for money, a career they pursue for social and professional success and a calling that defines who they are as people. 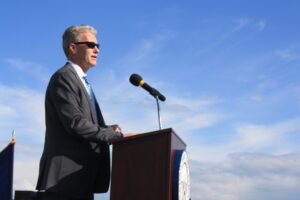 PIHS alum Mark Hamlin shares advice with the Class of 2022 during their graduation ceremony Saturday. (Melissa Lizotte | The Star Herald)

Those who have a calling are those who contribute something to others. Whether that means comforting people before surgery or making friendly conversation while assisting them in a grocery store, Hamlin said.

“Always pair your goals with your values and help others with your actions,” Hamlin said. “You can help people just by interacting and connecting with them.”

“Don’t let events of the recent past dictate your life,” Bartlett said, referring to the pandemic’s impact on school life. “You already have the experience to help you rise above obstacles in the future.”

Bartlett’s advice to remain connected with classmates served him well during the graduation ceremony.

Not long after Bartlett’s speech, Hamlin surprised the audience when he announced that June 11, the day of the ceremony, was Bartlett’s birthday.

Hamlin led the students in an impromptu rendition of “Happy Birthday,” telling them afterward, “Your high school friends will always embarrass you.”

In keeping with tradition, Bartlett recognized students in the top 10 percent of the class and those who make up the top five, based on grade point average. 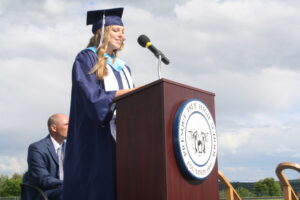 Class President Libby Kinney reflects on her high school years before graduating alongside her classmates. (Melissa Lizotte | The Star Herald) 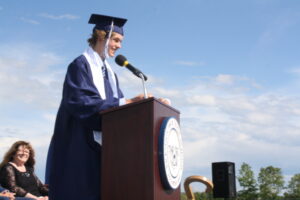 In their speeches, Class President Libby Kinney and Class Speaker Clay Gregg shared advice to their peers that reflected the most important lessons they’ve learned throughout high school.

“This class is the most passionate, hard working and funny group of people I know, and I know you’ll all do great things,” Kinney said. “Have fun, work hard and remember that success isn’t measured by the grade on a paper, but by the person doing the work.”

That’s a lesson Gregg said he has learned all too well.

“Trust me, I’m just as surprised as you that they would let me be the class speaker. I’m even more surprised that I’m here about to graduate,” Gregg said. “But I’m not here to say all the mistakes I’ve made because trust me this speech would be long.”

Instead, Gregg told his classmates to be proud of having survived high school during a pandemic and coming out as stronger people because of those challenges.

“As you close one book, you have to pick up another, and now our class is on to better things,” Gregg said. “We are now opening up our new book, but we write the words and control what happens.”

June is generally a month that also marks the height of “kitten season,” when large litters of kittens are born and often end up in animal shelters.   Luckily, here at the Central Aroostook Humane Society, we have seen a dramatic drop in the cat population over the past five years, mostly due to our spay and neuter program.
What's Happening This Week END_OF_DOCUMENT_TOKEN_TO_BE_REPLACED