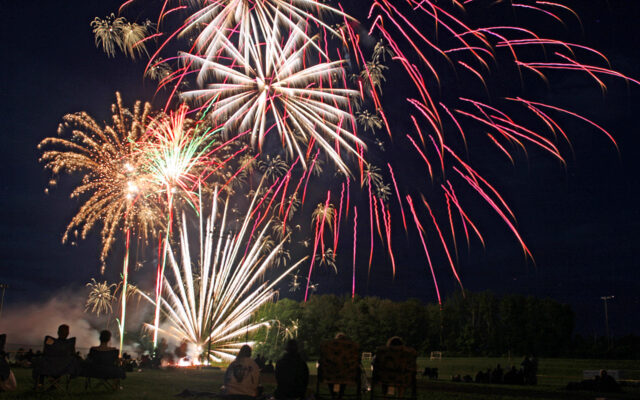 HOULTON, Maine — The town of Houlton will once again be hopping with activities over the Fourth of July holiday.

Between Midnight Madness, the annual Craft Fair and Houlton’s Agricultural Fair in Community Park, the Shiretown will feature four busy days of events planned to celebrate the nation’s independence.

The festivities officially begin Thursday, June 30, as the Greater Houlton Chamber of Commerce hosts its annual strawberry shortcake sale. The tasty treats can be purchased in advance by calling the Chamber at 207-532-4216 or by showing up in Market Square on the day of the event between noon and 2 p.m.

Midnight Madness returns Friday, July 1, starting at 4 p.m. in downtown Houlton. This year’s theme is “Sci-Fi Madness” and downtown merchants are encouraged to decorate their storefronts in that theme.

A portion of Market Square, including Main and Court streets, will once again be closed to traffic to allow vendors to set up shop in the street.

The event has turned into one of the largest street fair gatherings in southern Aroostook County. In the days prior to COVID-19, it was not uncommon for more than 1,000 people to fill Market Square for the celebration.

“We have about 45 vendors signed up and more people are calling each day,” said Jane Torres, executive director of the Greater Houlton Chamber of Commerce. “There will be a wide variety of food to choose from, along with many other vendors selling items.”

McGills’ Community Band will perform at the Houlton Amphitheater from 7-8 p.m. Music from Ted and the Boys, with Miss Emily, will then take over on a makeshift stage in Market Square at 8 p.m., playing favorites up until the fireworks display over the Gateway Crossing Bridge at 9:30 p.m.

The popular Miracle Mile road race will not be held this year.

In order to get people into the spirit of “Sci-Fi Madness,” a costume contest will be held at 10 p.m. at Shiretown Gaming, with winners selected in one of three categories – 18 and older; 13-17 and 12-and-under.

The fair returned in a limited fashion in 2021, lasting just two days and featuring no midway rides. In 2020, the fair was canceled because of COVID-19.

This year, the fair is celebrating its 175th anniversary and will run from July 2-4, featuring a stronger focus on its agricultural heritage, according to Colby Dunn, president of the Houlton Fair Association.

“We are really working on getting back to basics with our fair,” Dunn said. “Having rides is great, but the whole reason the fair started back up (in the late 1980s) was to be an educational, agricultural event.”

Dunn said due to the uncertainty surrounding COVID-19 when the event was in its planning stages, the fair board did not even pursue the idea of having carnival rides this year. He did not rule out the possibility of rides returning for future fairs.

Although there will be no midway rides for the second straight year, there will be some carnival-style games and food vendors to provide entertainment, Dunn said.

“While we were not able to obtain midway rides this year, we are excited to take the agricultural fair back to its roots with our primary goal being to provide education around Aroostook County’s lifeblood – agriculture, through entertainment, showcases and demonstrations,” added Nina Lipscombe, public relations superintendent for the fair.

Throughout the three days, there will be livestock exhibits (including alpacas, sheep, goats and oxen), Wee Wee Wee Pig Races, performances by Showtime Steve, a bundle of children’s games (including favorites such as the egg toss and sack races), and music performances by Fireman Fred Parsons.

The exhibition hall will be located inside Millar Civic Center this year, to allow more space for vendors to set up. Houlton Middle-High School will also have a booth in the arena for Wreaths Across America. The group has a lofty goal of raising enough funds to place 1,000 wreaths on veterans gravemarkers.

The large Fourth of July parade will be held Monday, July 4, at 10 a.m.

The fair will conclude Monday, July 4, with a performance by “Dragon Man” Jason Tardy at 8:30 p.m. followed by a massive fireworks display starting at 9:20 p.m.

The full fair schedule can be found online at https://houltonfair.org/.

Forbidden foods for our four-legged friends are many and can be very dangerous if ingested. Sometimes, we give our pets leftovers or what we consider treats. According to many sources, some human foods can make an animal very sick, and in certain cases can even be lethal.
What's Happening This Week END_OF_DOCUMENT_TOKEN_TO_BE_REPLACED