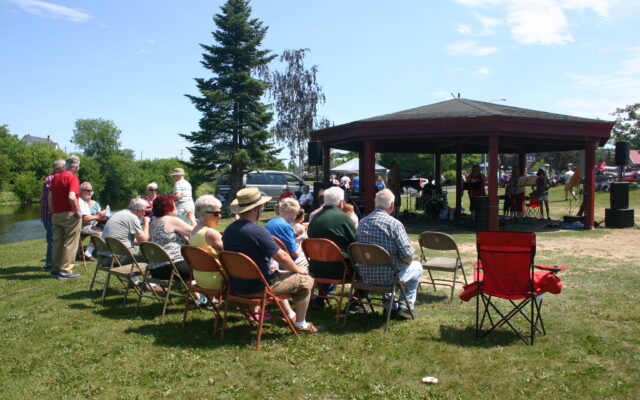 Paula Brewer • June 24, 2022
Old and new traditions will mingle next week when the city of Presque Isle and Elks Lodge 1954 join forces for the second year to help residents celebrate the Fourth of July.

PRESQUE ISLE, Maine — Old and new traditions will mingle next week when the city of Presque Isle and Elks Lodge 1954 join forces for the second year to help residents celebrate the Fourth of July.

For the past 16 years, the Elks have hosted a community Fourth celebration, and last year the city joined in to create the “July Jubilee.”

This year events will start with fireworks at dark on the evening of Sunday, July 3, launched from the Riverside Park Pavilion parking lot.

A full afternoon and evening of activities at Riverside Park on Monday, July 4, will include the popular Elks car show and hot dog lunch, games and activities for kids, fun at the splash pad, live music from The Good Ole Boys and Girls and an evening concert with Star City Syndicate. All food and activities are free.

The event has grown from 2006, when the Elks lodge first wanted to provide a celebration for those who would otherwise be alone on Independence Day. It has turned into a full slate of activities for people of all ages.

Nothing was happening in Presque Isle 16 years ago to celebrate the Fourth of July, said Alan Harding, past exalted ruler of the local Elks. In 2005 the group had successfully hosted its first free Community Christmas Dinner, and members decided they wanted to offer the same opportunity for the summer holiday.

“Our focus was the people who didn’t have friends or family with places at the lake, like the elderly, economically disadvantaged and those new to the area — people who would otherwise be alone on a very important holiday,” Harding said Thursday.

The car show will start at 11 a.m., along with lunch that will include hot dogs, chips, popcorn, juice, water, shaved ice and watermelon, he said. There will be games and contests for the kids, who can also enjoy the splash pad and playground, and live entertainment will feature The Good Ole Boys and Girls.

Though the Elks wanted to provide some memorable festivities, they also wanted to help people connect to their community, and that has been a great success judging from the enthusiastic responses people have had over the years, Harding said.

“The ones that stick out to me the most are the young families, but also the elderly,” he said. “At one point we were offering boat rides on the river, and I recall vividly an elderly woman climbing into my boat, and she was just so effusive in her gratitude.  ‘This is the first time I have ever had a boat ride,’ she told me.”

The community tradition is one the city is proud to be a part of, said Kim Smith, Presque Isle’s resource development and public information officer.

“Anytime you can partner with an organization that’s been known to have such a successful event over so many years and bring so many people downtown, it’s got to be a win-win,” Smith said.

The city has put about $15 million into the Riverside Park recreation area in recent years, she said, including the Sargent Family Community Center, the splash pad and playground, Riverside Pavilion, Mary’s Mile walking path, new benches and tables and more.

It’s all part of the Star City’s quest to revitalize the downtown and draw the community in. Efforts like summer concert series Rockin’ on Riverside, the Presque Isle Farmers Market and other events are key to a vibrant, engaged community, especially in light of the outmigration Aroostook County has seen over the past years, Smith said.

“It’s very important to bring new people to town, new businesses to town, attract young families to the area, and you can’t do that without having the amenities that they are looking for,” she said.

All activities for the Fourth are free and family friendly, she added, and encouraged people to bring their lawn chairs and enjoy the events.

Since the fireworks on July 3 will be launched from the Riverside parking lot, all downtown businesses and residents who normally park in and around that lot are asked to have their vehicles moved to a different location by noon that day to avoid towing.

For more information, contact Smith at the city of Presque Isle by phone at 207-760-2722 or by email at ksmith@presqueisleme.us.

Forbidden foods for our four-legged friends are many and can be very dangerous if ingested. Sometimes, we give our pets leftovers or what we consider treats. According to many sources, some human foods can make an animal very sick, and in certain cases can even be lethal.
What's Happening This Week END_OF_DOCUMENT_TOKEN_TO_BE_REPLACED