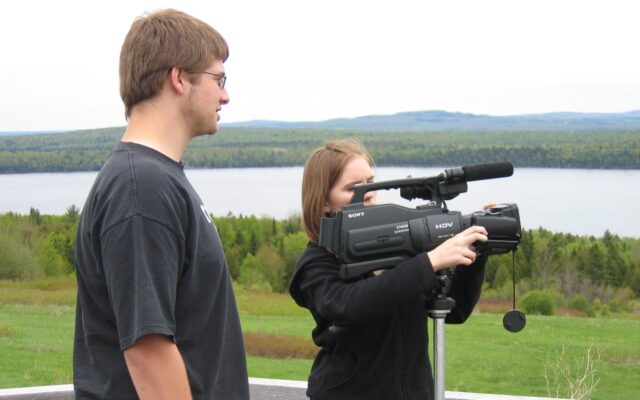 Contributed • July 7, 2022
A film about Aroostook State Park will get an encore presentation Thursday and Saturday.

It may be more than ten years since Viking Video Productions at Caribou Tech Center was closed down, but the documentaries they made still hold interest for viewers of Maine Public Television.

“Aroostook State Park- Maine’s First,” a half-hour documentary produced in June of 2010, will encore on Maine Public Community Films at 9:30 p.m. on Thursday, July 7, and at 2 p.m. on Saturday, July 9.

This show, which took the entire school year to film and edit, shows the park in all its glory over the four seasons of the year – from camping, swimming and hiking in warmer seasons, to a haunted park at Halloween and from the boy scouts making igloos for a winter sleep over to winter fun day with snow shoeing, skiing and sled dog rides.

And for history buffs, the film does delve into how Aroostook State Park came to be.

“It was such a fun film to make,” says Brenda Jepson of Madawaska Lake, who taught the Viking Video Productions class for fifteen years from 1995 – 2010. “My husband and I took the students camping in the park as part of the experience.”

“We are so glad that the public and my former students (who are friends with me today on Facebook) will have chance to watch the show and enjoy it once more.”

Forbidden foods for our four-legged friends are many and can be very dangerous if ingested. Sometimes, we give our pets leftovers or what we consider treats. According to many sources, some human foods can make an animal very sick, and in certain cases can even be lethal.
What's Happening This Week END_OF_DOCUMENT_TOKEN_TO_BE_REPLACED