Lorraine Monfils, Ark Animal Sanctuary • July 10, 2022
Every cat that passes through our doors has a story, some happy, some sad. In this article we want to share Bluebell’s story with you. Bluebell came in as a very pregnant stray. She had been living under someone’s porch.

Every cat that passes through our doors has a story, some happy, some sad. In this article we want to share Bluebell’s story with you. Bluebell came in as a very pregnant stray. She had been living under someone’s porch.

A few weeks after she arrived at the ark she went into labor. Bluebell did not have an easy delivery. She delivered her first two kittens successfully and then her labor stopped, 24 hours later she delivered three more kittens who were all stillborn. It was such a sad thing to watch, she tried so hard to revive them, but it was not meant to be.

Another 24 hours went by and she had not used the litter box, after consulting with the vet they thought it best that we bring her in. We drove two hours to get her to the emergency vet clinic and after taking x-rays it was determined she was just really constipated which was very uncomfortable for her.

She had gone through so much in the past few days and we just needed to get her comfortable so she could take care of her two  surviving babies. She was sent home with a few things to get everything moving again. A few days later the flood gates opened and she finally got some relief. 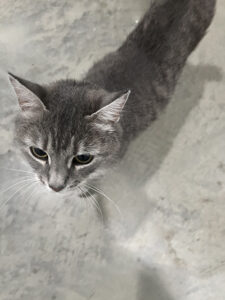 Bluebell, who came to the Ark Animal Sanctuary while pregnant, has been adopted to her new forever home.
(Courtesy of Lorraine Monfils)

A short time after we received a phone call about three kittens about 3 weeks old with no mom. We told them to bring the kittens in, our plan was to see if Bluebell would accept them. She did not hesitate; she started cleaning them and nursing them as if they were her own. She had lost  three of her own and now without hesitation she had three new babies to raise. We watched in awe at what an amazing mom she was.

Bluebell’s story doesn’t end there. Another kitten was found and brought in from another area and yes Bluebell accepted that one as well with no hesitation. What a remarkable cat.

The kittens have since grown up and been adopted. Bluebell was spayed on Monday and this weekend she is headed to her new “furever” home. She deserves nothing but the best and her new family is waiting anxiously to give that to her. Nothing but good things from here on out. We well miss you Bluebell but we are so glad we got to be a part of your journey.

The Ark Animal Sanctuary is located on 101 Old Woodstock Road. To contact Lorraine Monfils call 207-532-7387 or check out their Facebook page.

Forbidden foods for our four-legged friends are many and can be very dangerous if ingested. Sometimes, we give our pets leftovers or what we consider treats. According to many sources, some human foods can make an animal very sick, and in certain cases can even be lethal.
What's Happening This Week END_OF_DOCUMENT_TOKEN_TO_BE_REPLACED