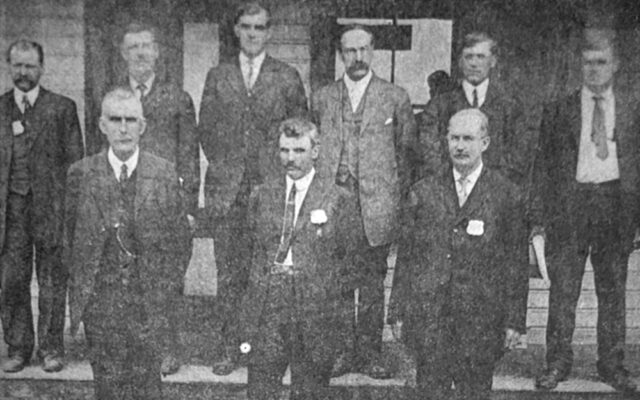 He was a graduate of A.C.I. and was presented the awards for citizenship, scholarship, science, mathematics and the Reader’s Digest Valedictorian award.

Director appointed — A Presque Isle native was appointed director of community services for the Maine Public Broadcasting Network. Dan Everett, son of Mr. and Mrs. Charles Everett of Presque Isle, and a graduate of Presque Isle High School and the University of Maine at Orono, assumed responsibility for the network’s promotion, utilization and community relations activities, according to General Manager John Morison, who announced the appointment. Everett joined MPBN in 1969 as a producer-reporter to the network’s nightly news interview program “Maine News & Comment.” He had produced and hosted several news specials including gubernatorial and congressional debates, political conventions and election coverage. For the previous two years, he had been the network’s executive producer for public affairs. Prior to joining MPBN, Everett worked at radio stations in Bangor and Bath. From 1960 to 1962, he was a staff announcer at Presque Isle stations WEGP and WAGM.

Mrs. Alley promoted by MPG — Charles H. Guiney, treasurer and general manager of Maine Potato Growers Inc., announced the promotion of Ramona C. Alley to comptroller and assistant treasurer effective July 1. Mrs. Alley first came to MPG in December 1953 and had been employed in the accounting department since that time. On July 1, 1958, she was promoted to payroll and disbursements accountant and accounting machine instructor. She became chief accountant of the accounting department Oct. 1, 1967, involving 10 operating departments and MPG Commodities Inc., the corporation’s potato trading transactions with the New York Mercantile Exchange.

Kneelands named Farm Family — The Kneelands were honored at the Maine Potato Board industry dinner as the 1997 Farm Family of the Year. It is a singular, annual honor bestowed on a family that had achieved a pinnacle of success in a profession that had been key to the growth and survival of the nation. Equally important, the fact that that was a focal point of the 1997 Maine Potato Blossom Festival in Fort Fairfield.  Richard and Jean Kneeland were the 1990s’ heads of the family. The tradition they inherited was one that was linked forever to the blossoming of pink and lavender blossoms on the rolling landscape.

County judge had a court named in his honor — Justice James P. Archibald had many memories from his 40 years of serving on the bench. A new memory was made for the Houlton native as the Aroostook County Superior Courthouse in Houlton was rededicated in his honor. The idea to rededicate the courthouse came from the Aroostook County Commissioners. “Having someone serve 40 years was impressive and we thought it would be fitting to honor Judge Archibald by recommitting the building in his name,” said John McElwee, county commissioner.

Good fellow — The Presque Isle Rotary Club bestowed the Paul Harris Fellow, Rotary’s highest honor, to David Olsen of Mapleton.  Olsen had been active in the club since 1983, serving as austin chairman in 1986, club president in 1987, as well as serving  on the program for undeveloped countries.

Forbidden foods for our four-legged friends are many and can be very dangerous if ingested. Sometimes, we give our pets leftovers or what we consider treats. According to many sources, some human foods can make an animal very sick, and in certain cases can even be lethal.
What's Happening This Week END_OF_DOCUMENT_TOKEN_TO_BE_REPLACED