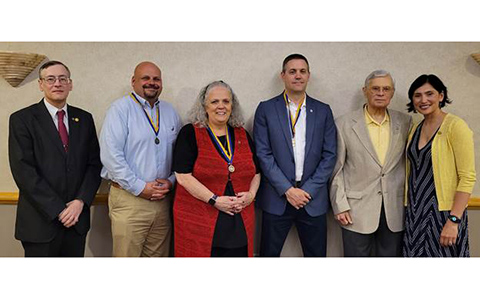 The honor goes to those who have demonstrated outstanding community service and support to the Rotary Foundation’s efforts within the community and beyond.

Receiving the honor during a gathering of club members and the community were Clint Deschene, Jan Lucas, Michael McPherson and Scott Violette. During the club’s end-of-year barbecue, PI Rotary Foundation chairman and longtime member Floyd Rockholt was also honored with the Paul Harris Fellow recognition.

Paul Harris Fellow recognitions are the highest award in Rotary. The first Rotary Club was founded by Paul Harris and three business associates in Chicago in 1905. Rotary become an international organization with millions of members around the globe. The Rotary Foundation, established in 1917, focuses on programming to provide educational opportunities, healthy food, potable water, healthcare, immunizations and shelter for people in need.

Deschene of Presque Isle, presented by Past President Sarah Duncan, served as president of the Presque Isle Rotary Club in 2019-2020, which had many challenges as the world entered into a global pandemic.

He led the club through the uncharted territory of virtual meetings and assisted with the process of reimagining the annual auction, which turned the event into an opportunity to give back to local businesses and organizations that have supported the club over the years.

He received his undergraduate degree from the University of Maine in Orono and juris doctor degree from Suffolk Law in Boston. He served as town manager of Hermon and city manager of Auburn. In 2015, he and his family returned to Presque Isle so he could focus his energy on growing and stimulating the Aroostook County economy.

Lucas was nominated and presented by Clint Deschene. In 2005, she and her husband moved from England to Presque Isle, where they helped to open Café Sorpreso. She shared her expertise in the hospitality industry at the Crow’s Nest, the Hampton Inn and most recently Ignite PI.

She served as Secretary of the Presque Isle Rotary Club during the pandemic and the revamping of the Rotary Auction and the Great Big Give Back. She was integral to the club’s success and was recognized as Rotarian of the Year in 2020.

Lucas is also passionate about history and has been a dedicated member of the Presque Isle Historical Society.

Past President Ray Hews presented Michael MacPherson with his sixth Paul Harris Fellow recognition. McPherson has been a PI Rotary member for 41 years, serving as past director, past president, and past district governor.

He has developed many successful businesses and serves on various boards and committees throughout the Presque Isle area, including the Mark & Emily Turner Foundation, Nordic Heritage Center, MMG Insurance board of directors and the Aroostook Hospice Foundation. He is a U.S. Army veteran and is involved in the Grant Memorial United Methodist Church.

As a co-founder of the Aroostook House of Comfort, he has made an enormous impact for families helping their loved ones through end-of-life care.

The final Paul Harris Fellow recognition of the evening was presented to Scott Violette with a light roasting by his father and Honorary Rotarian, Charlie Violette.  Scott served as club president from 2012-2013 and has served the community in many capacities.

A 1996 graduate of the University of Southern Maine, Scott began his family and his career in New Hampshire. In 2007, they returned to Presque Isle, where he became active in the community.

In addition to his co-ownership of Barresi Financial, Scott has served on the Wintergreen Arts Board, Presque Isle Downtown Revitalization Committee, University of Maine at Presque Isle Board of Visitors, the Presque Isle Country Club, Momentum Aroostook, and the Mark & Emily Turner Foundation Board.

Rockholt has received several Paul Harris Fellows over the years for his commitment to the club, Rotary Foundation and the community. In his 25-year-long membership with the club, he has served as director, treasurer, president, assistant district governor, and foundation committee chair.

In addition to ownership of Eagle Hill Stamp and Coin, he has been actively involved throughout the community, including through the Central Aroostook Chamber of Commerce, the Crown of Maine Balloon Fest, Presque Isle Downtown Revitalization Committee, and various other community events.

“We are truly honored to have these five talented and dedicated individuals working hard in our community. Each of them displays the qualities that embody the purpose of the Paul Harris Fellow and further the efforts of the Rotary Foundation,” Rachel Rice, Presque Isle Rotary Club President for 2021-2022, said.

“We would like to extend our gratitude to these individuals, their families, and those community members who continue to support the Presque Isle Rotary Club and its local and global efforts.”

Forbidden foods for our four-legged friends are many and can be very dangerous if ingested. Sometimes, we give our pets leftovers or what we consider treats. According to many sources, some human foods can make an animal very sick, and in certain cases can even be lethal.
What's Happening This Week END_OF_DOCUMENT_TOKEN_TO_BE_REPLACED