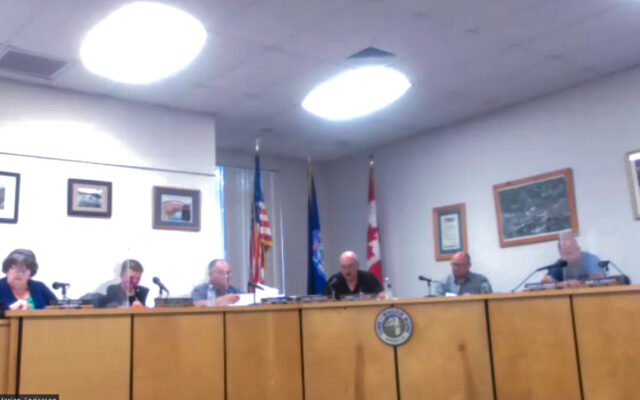 Kathleen Phalen Tomaselli, Special to The County • August 2, 2022
Popularized by pandemic restrictions, Zoom meetings are here to stay. But saddled with old and makeshift audio and video equipment, Houlton town meetings are a challenge for remote attendees because it's hard to hear and see speakers.

HOULTON, Maine — Popularized by pandemic restrictions, Zoom meetings are here to stay. But saddled with old and makeshift audio and video equipment, Houlton town meetings are a challenge for remote attendees because it’s hard to hear and see speakers.

The COVID-19 pandemic drove people to remote access of public meetings, and even as health restrictions have lifted, people who have become accustomed to such methods want them to stay — they just want them to be easier to hear and see.

“People have complained that there are a lot of distractions, talking, rattling papers,” said Tortello. “It’s important we hear from our users … As a user myself when coming in from home, it’s hard to hear and there is a lot of static.”

Town Manager Marian Anderson agreed, adding that there were several messages from remote attendees during Monday’s meeting who said they had difficulties hearing the councilors.

“What we have is a microphone set-up that is old and outdated and it is a challenge to hear people,” said Anderson on Tuesday. “You can hear breathing, papers shuffling. It’s just not set up for remote meetings on a regular basis and we want to move forward.”

The Houlton Town Council chambers are equipped with microphones and high-definition cameras, but those are solely for broadcasting the meetings on public access television.

Most systems are equipped with an array of microphones and cameras that offer a variety of camera angles for attendees to see speakers and even note who is speaking, said Horvath on Wednesday.

There’s even a Cisco system that switches cameras to track speakers around the room. For example, if a town councilor asks a speaker a question the camera will switch from the speaker to the councilor and back again.

“We’d like to create a sustainable, satisfying experience,” he said.

There are several remote meeting software options including Google Meet, but Zoom is currently the frontrunner. Founded in 2013, the software giant registered about 400,000 users initially. Growth continued to climb, but use exploded during the pandemic, according to Zoom officials. The company now registers more than 3.3 trillion meeting minutes annually.

Remote meeting and web conferencing packages range from about $2,000 to $20,000. Houlton’s package will land somewhere in the middle of that range, Horvath said.

Prior to presenting options to the council, Horvath has asked several local information technology experts for feedback to make sure the equipment will meet the town’s needs for the next seven-10 years.

“I want to under-promise and over-deliver,” he said.

Horvath hopes to have a proposal ready for councilors to discuss and approve later this summer with a package ready to go by late fall.

Forbidden foods for our four-legged friends are many and can be very dangerous if ingested. Sometimes, we give our pets leftovers or what we consider treats. According to many sources, some human foods can make an animal very sick, and in certain cases can even be lethal.
What's Happening This Week END_OF_DOCUMENT_TOKEN_TO_BE_REPLACED