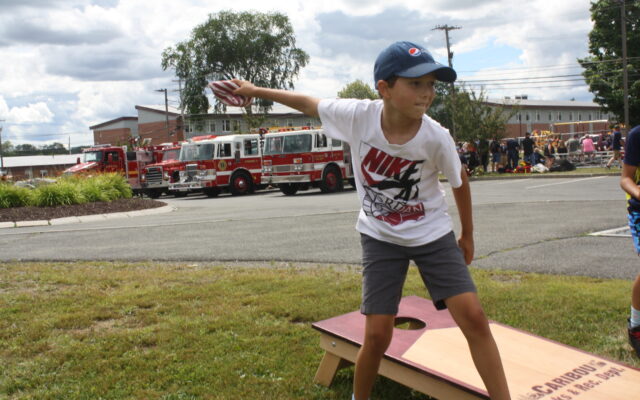 Families flock to Caribou for weekend of kid-friendly activities

From food vendors and carnival games to sports competitions, Teague Park was filled with youngsters eager for their last chance of summer fun before school starts. Parks and Recreation Superintendent Gary Marquis said that he and staff had already seen thousands of people by Saturday afternoon.

“We’ve seen far more people than last year,” Marquis said, while getting ready to kick off Saturday’s activities. “People have liked how much we have to offer.” 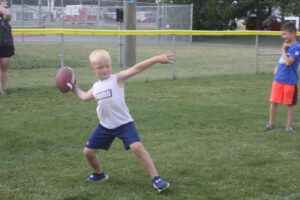 While Caribou Cares About Kids has been a tradition for more than 30 years, this 2022 marks only the second time the events have taken place since the beginning of COVID-19. Last year Caribou Cares was held in conjunction with Caribou Days and did not feature a full four days of kid-themed activities like this year. 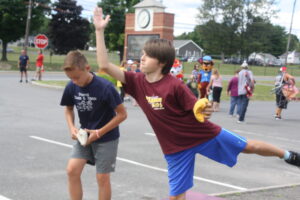 Caribou boys Kyden Haines, 10, and Jackson Belanger, 10, easily found themselves in the final round of the cornhole tournament and also showed off their skills in the football competitions.

“I think we’ll get a trophy,” Belanger said, before winning in the cornhole tournament with Haines.

The two friends attended Caribou Cares with friends Wesley and Everett Thomas, 10 and 8, respectively, their mother Paula Thomas and little sister Natalie Thomas, 3, who are from Woodland.

Caribou native Paula Thomas said that she and the family were enjoying the wider variety of activities at the rec center. 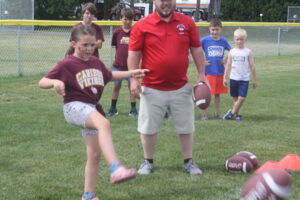 “There’s so much to do. Every day we’ve come we’ve ended up staying all day,” Paula Thomas said.

Kyle and Kasie Wells of Caribou arrived in time to see their sons Karson, 8, and Kaidyn, 7, try to step into the shoes of big brother Landyn Sterris, 11, who plays for Aroostook Football League.

The family was looking forward to checking out other Caribou Cares events, including the parade.

“It’s a nice way to hang out as a family,” Kyle Wells said. 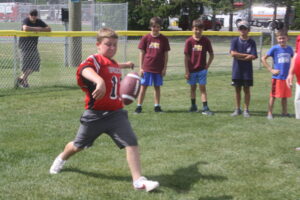 Hearing positive comments like that from families has convinced Caribou Parks and Recreation to continue making Caribou Cares the largest area festival of the summer.

“People love that we have all these new events, so we’re definitely doing it again next year,” Marquis said. 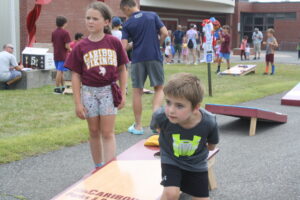 Five-year-old Connor Chartier of Caribou (right) gets ready to make a toss during the Caribou Cares About Kids cornhole tournament while Zoey Baker, 8, of Caribou looks on. (Melissa Lizotte | Aroostook Republican)

Next year's Caribou City Council will include a new member and a longtime councilor thanks to Tuesday's election.
Pets END_OF_DOCUMENT_TOKEN_TO_BE_REPLACED

Everyone who enjoys the company of a dog knows that sometimes dogs have strange behaviors.  They may arrive in your life with the behaviors already in place, or perhaps they are adopted as a puppy and develop a behavior young.
What's Happening This Week END_OF_DOCUMENT_TOKEN_TO_BE_REPLACED