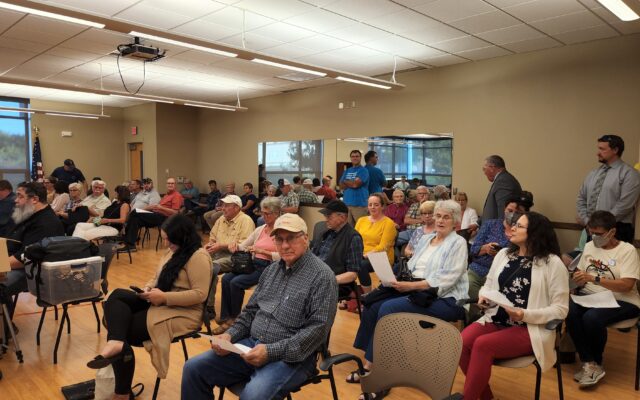 Paula Brewer • September 8, 2022
More than 40 people turned out for the Presque Isle City Council meeting Wednesday night to talk about the recent Pride Aroostook Festival and an upcoming drag show.

PRESQUE ISLE, Maine — More than 40 people turned out for the Presque Isle City Council meeting Wednesday night to talk about the recent Pride Aroostook Festival and an upcoming drag show at a local sports bar.

Inspired by events and parades in other parts of Maine, Pride Aroostook put together the first parade and festival last year in Caribou, moving the event to Presque Isle in June this year. The organization is also sponsoring the Delicious Drag Divas show on Oct. 1 at the Time Out Sports Bar.

Drag queens have performed for capacity crowds in Bangor in recent months, attracting audiences of all stripes. Delicious Drag Divas, founded in Bangor five years ago by Lloyd Tracy and his husband, Tony, a.k.a. LaDonya Lovelace, have seen audiences multiply.

The show will be a first in the Presque Isle region, and residents on both sides shared concerns about whether the city will remain open and welcoming or exclude certain groups of people.

The Divas will be in Presque Isle for their show on Saturday, Oct. 1, said Lloyd Tracy, a.k.a. Lady D, Thursday.

“To those who support the show, I say thanks and can’t wait to see you,” Tracy said. “For those who don’t support it, I would say please feel free to reach out to me and let’s talk about your concerns and see if we can come to an understanding where we can both be happy.”

A staff member at the Presque Isle Inn and Convention Center, home of the Time Out Sports Bar, confirmed Thursday that the show is scheduled.

The situation in Presque Isle is deeply concerning to many, said Granvill Lamb Jr. during public comments at the meeting. He objected to the Pride Aroostook Festival being held in the splash pad area at Riverside Park because it exposed children to LGBTQ+ ideas.

“The dearest people we have in our heart [are] our children, grandchildren, nieces and nephews,” Lamb said. “Kids don’t need to have some of this stuff thrown at them.”

The fact that a business is going to have drag queens here may put off other businesses, he suggested, urging the city council to put an ordinance in place to curtail such performances.

“Do we know who any of these people are?” he asked.

“Do we know who any of us are, really?” City Councilor Mike Chasse said.

Mainers place a high value on freedom and on being good neighbors, said resident Danielle Feinberg. Presque Isle is a fair and welcoming place, but the LBGTQ+ population is a group of fellow Mainers who have experienced harassment.

People may have been told to come to the council meeting to speak against the drag performance, but instead should welcome the performers and allow whoever wants to attend to do so, she said.

“The consequence of taking another’s rights away is the possibility of losing our own,” Feinberg said.

The passion to protect children motivated other residents to speak in favor of the Pride movement.

“On behalf of those I love, I don’t want them to slit their wrists anymore,” Meg Hegeman said with emotion, referring to two members of her family who identify as LGBTQ+ and have attempted suicide due to bullying.

The highest rates of suicide are among youth in the LGBTQ+ population, because of the constant harassment they endure, she said.

People are called to love, first and foremost. Children are taught hatred, Hegeman said, identifying herself as a follower of Christ.

Raising ire about the people who are coming to perform isn’t helping anyone, said Sarah McLean, who is also a licensed clinical social worker with Aroostook Mental Health Services Inc.

In fact, it’s an insult to people in the community who support the LGBTQ+ population to think that they are going to harm children.

“Putting people back in the closet is only harmful,” McLean said. “It isn’t 1950 anymore.”

What’s most important is to let youth of varying identities know they are not alone, and that there are others like them, resident Kyle Washington said.

There are much greater dangers out there than drag shows at a place for consenting adults, he said.

City Council Chairperson Kevin Freeman and councilors thanked residents for sharing their views. They took no action toward establishing an ordinance to ban such performers or events.

Next year's Caribou City Council will include a new member and a longtime councilor thanks to Tuesday's election.
Pets END_OF_DOCUMENT_TOKEN_TO_BE_REPLACED

Nearly anyone who has ever had puppies or dogs can relate to “The Zoomies.” The zoomies are defined as those sudden bursts of pent-up energy that cause dogs to run at breakneck speeds back and forth or around and around, or sometimes in a tight little circle.
What's Happening This Week END_OF_DOCUMENT_TOKEN_TO_BE_REPLACED