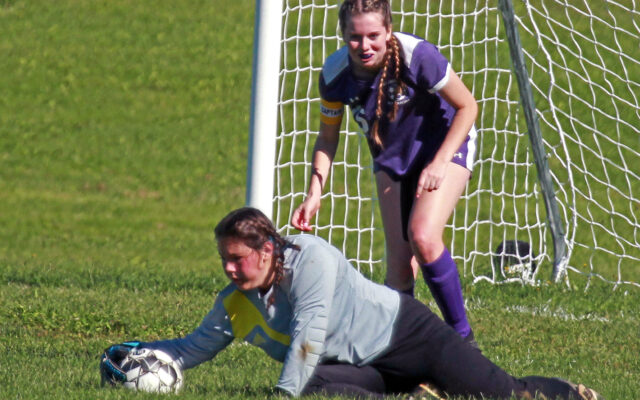 Joseph Cyr • September 8, 2022
The Katahdin varsity girls soccer team may have just nine players, but the Cougars are not about to make any excuses on the field this season.

STACYVILLE, Maine — The Katahdin varsity girls soccer team may have just nine players, but the Cougars are not about to make any excuses on the field this season.

Shaun McAvoy returns for his seventh season coaching the Cougars and is cautiously optimistic about his team’s prospects.

“I am looking forward to it [the season],” he said. “Like so many programs, our numbers are low, but I am optimistic. The girls are working hard at practice and we have some returning talent.”

With just nine players on the roster, including a pair of eighth-graders, that means the Cougars will not get many rest breaks on the soccer field this year and will be playing two players short in most of its contests.

O’Hara, the lone senior, has played all four years for the Cougars and will be called upon to provide veteran leadership for the younger players.

Slowing down the tempo of games and trying to capitalize on scoring chances when they present themselves will be the keys to success for the team this year.

“Our strength is defense, relying heavily on Maggie, Shelby Libby and Mackenzie Landry,” coach McAvoy said. “Hunter Hartsgrove is an all around athlete always looking to score along with Addison Heath.”

Schmidt has some big shoes to fill as she takes over goalie duties from Nikita Keim, who graduated and is playing at the University of Maine at Presque Isle this fall.

Katahdin also struggled with numbers and injuries last year, resulting in a 6-13 record.

The Cougars are without the services of senior Charlotte Hartt, whom coach McAvoy called a key player from last year’s squad. Hartt suffered a season-ending injury in the final game of last season and has been unable to make it back onto the field.

“My hope for this year is to stay healthy and put a love for soccer into the hearts of these girls,” coach McAvoy said. “They need to inspire underclassmen to play. I am starting a freshman and two eighth graders at midfield. We are hoping to be competitive even with low numbers.”

Gubernatorial candidate John Glowa said that he wants to spur government reform that truly creates a system of, by and for the people when he visited Presque Isle City Hall.
Pets END_OF_DOCUMENT_TOKEN_TO_BE_REPLACED

Many of you have been asking about our super popular “Toast to the Animals” celebration. After several COVID-19 cancellations and not being able to host this great fundraiser, we are finally ready to celebrate the animals once again and help support the Central Aroostook Humane Society.
What's Happening This Week END_OF_DOCUMENT_TOKEN_TO_BE_REPLACED