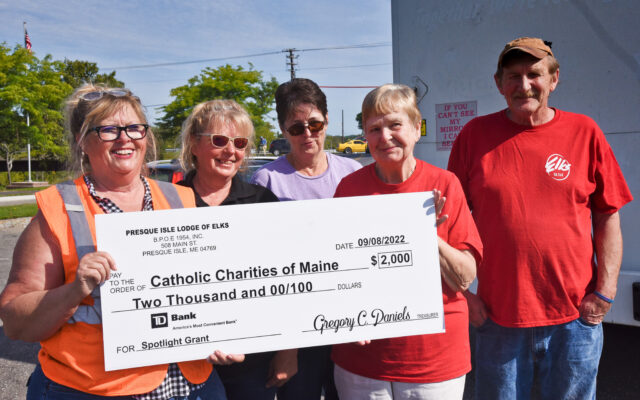 Paul Bagnall • September 15, 2022
Last Thursday, Sept. 7, a large line of cars wrapped around the Riverside Pavilion in Presque Isle as seniors picked up their food boxes from both sides of a food truck.

PRESQUE ISLE, Maine — Last Thursday, Sept. 8, a large line of cars wrapped around the Riverside Pavilion in Presque Isle as seniors picked up their food boxes from both sides of a food truck.

Aroostook Agency on Aging partnered with Catholic Charities to distribute 160 boxes of food in Presque Isle, passing them out with volunteers of the Presque Isle Elks 1954 to senior citizens as part of the Commodity Supplemental Food Program.

Catholic Charities Program director Dixie Shaw and Elks 1954 Board of Directors chairperson Alan Harding both agreed that the need for the commodity food program is increasing due to colder weather, but Harding said inflation is a factor as well.

“Inflation has really put food, for everyone, at a premium,” Harding said. “Things which had cost a dollar a year ago are costing $1.25 to $1.30 and more. Inflation has hit people really hard in their food budget.”

Seniors should call Aroostook Agency on Aging or stop in to pick up an application, according to Nutrition Volunteer and Community Coordinator Linda Lease. Applications are reviewed to see if candidates qualify for food boxes and are sent a welcome letter and a schedule for distribution if they do, Lease said.

To qualify for the program, residents must be at least 60 years old. According to Lease, the income requirements have increased by 5 percent this year.

Lease said the need is increasing slowly and gets the information out on food distributions through the community calendar on Agency on Aging’s website.

Catholic Charities distributes the food boxes from their two warehouses. The main warehouse in Caribou and a secondary warehouse in Monticello. Shaw oversees her organization’s Hunger and Relief Services.

“We have the warehouse capacity, we have freezers and coolers that are available to store, we have loading docks and equipment that’s ready to offload, from trailer trucks that come in once a month and store the food, and take our trucks out into the community and distribute the food in the larger communities, ” Shaw said. 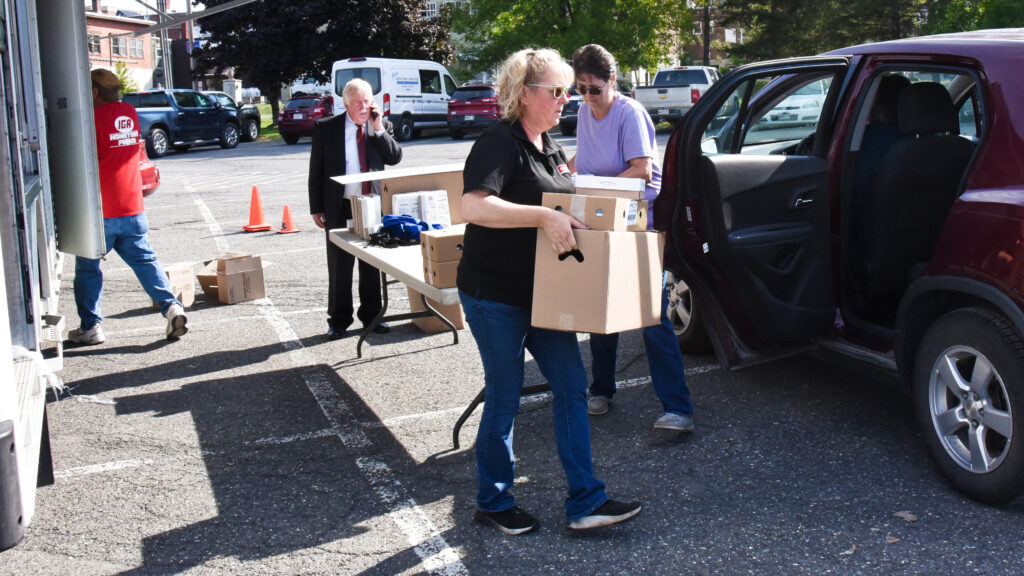 Catholic Charities’ role is to distribute the food in designated locations around Aroostook County from food trucks once per month with a secondary location for each location, according to Shaw. If a senior misses the food truck in Presque Isle, the food boxes are picked up from the Sargent Family Community Center throughout the month.

“The Catholic Charities piece is where we have flexibility, especially with having abundant amounts of fruits and vegetables, oftentimes available, and once our 28 pantries are served and have access that goes to the seniors and to anyone that needs it,” Shaw said.

The food trucks drive out to the larger communities in Houlton, Presque Isle, Madawaska, and Van Buren. The smaller communities are served with Catholic Charities food pantry network to meet seniors’ needs.

Shaw said the food boxes cater to the dietary needs of older residents with low sodium foods, along with a protein and one block of cheese, plus dried goods such as cereal, juice, canned fruits and vegetables.

Catholic Charities supplements the boxes with fresh vegetables and other food items from their two food banks in Aroostook, Northern Penobscot and Northeastern Washington counties.

Next year's Caribou City Council will include a new member and a longtime councilor thanks to Tuesday's election.
Pets END_OF_DOCUMENT_TOKEN_TO_BE_REPLACED

Everyone who enjoys the company of a dog knows that sometimes dogs have strange behaviors.  They may arrive in your life with the behaviors already in place, or perhaps they are adopted as a puppy and develop a behavior young.
What's Happening This Week END_OF_DOCUMENT_TOKEN_TO_BE_REPLACED