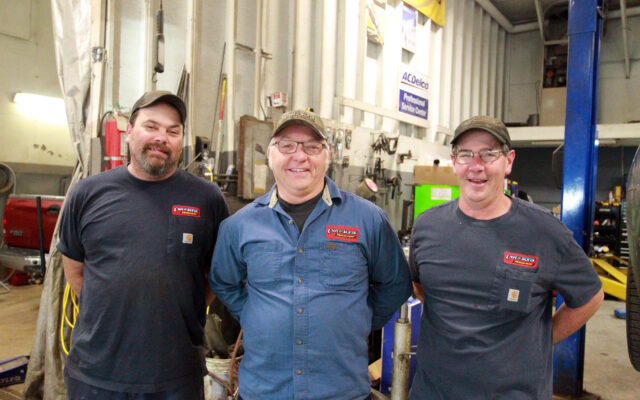 Joseph Cyr • October 3, 2022
A well-known automotive repair business in Houlton is under new ownership, but its former owner is still likely to be found helping out in the shop.

HOULTON, Maine — A well-known automotive repair business in Houlton is under new ownership, but its former owner is still likely to be found helping out in the shop.

Jason Fitzpatrick and Jason Clayton have acquired Cyr and Sons Repair, located at 7 Sugarloaf St., from owner Brent Cyr. The two served as mechanics at the shop for the past year, before venturing into ownership.

For 25 years, Cyr helped keep vehicles on the road for countless people. But after a life-altering health event, he decided the time was right for him to cut back.

“I knew those guys were looking for a potential place to open a garage, so I approached them about working for me for a year and then taking it over,” Cyr said. “I have known Jason Fitzpatrick for a long time and I knew of Jason Clayton. I was very impressed with their work ethic.”

Selling the business to Fitzpatrick and Clayton was not a difficult decision, as the two have shown a genuine desire in seeing the business grow and succeed, Cyr said. Under its new ownership, the business will remain Cyr and Sons Repair.

Clayton and Fitzpatrick will be hands-on in their ownership, with both spending the bulk of their time working on vehicles. Cyr will also lend a hand with repairs.

“I will still be around, as long as I want to be and as long as the boys want me here,” Cyr said. “I also still have old vehicles that I will be tinkering with.”

Fitzpatrick had been with Cyr and Sons since November 2019, while Clayton joined the company in December 2020. When Cyr approached the two about taking over the business, they were eager to carry on his tradition.

Clayton and Fitzpatrick first met through the Houlton Lodge of Elks and quickly discovered a common passion for automotive repair. The two started working on vehicles in a small garage on the side from their regular jobs, but quickly outgrew that building.

“Brent heard that we were looking for a garage,” Clayton said. “We had been looking for something for a while. It really was a perfect fit.”

Having Cyr stay on has proven to be a valuable asset for the two new business owners.

“The big thing is you see his familiar face behind the desk,” Fitzpatrick said.

“I think it was less of a shock factor with Brent still here,” Clayton said.

Working on cars and trucks has been a lifelong passion for Cyr.

“I worked for a dealership for just about 17 years and then I decided to go out on my own,” he said. “In my 25 years, this industry has certainly changed. Everything is so much more electronic and computerized than it was in the past. It makes an old guy like me have to think a lot harder (on how to fix it).”

Cyr said he would miss dealing with the many customers he has come to know over the years. Some of those customers are generational in that he has worked on vehicles for parents, their children and even their grandchildren.

“We have a large base of regulars and I am so thankful for their support over the years and for trusting me to work on their vehicles,” Cyr said.

Next year's Caribou City Council will include a new member and a longtime councilor thanks to Tuesday's election.
Pets END_OF_DOCUMENT_TOKEN_TO_BE_REPLACED

We thought we would give everyone an update on IHOP the little kitten we took in with the paralyzed tail and foot.
What's Happening This Week END_OF_DOCUMENT_TOKEN_TO_BE_REPLACED