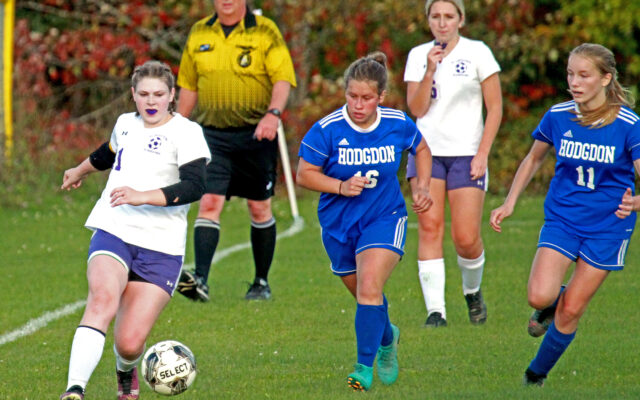 With season winding to a close, soccer squads stay busy

Joseph Cyr • October 4, 2022
The leaves may be changing and the temperature is dropping, but the soccer action is heating up for boys and girls varsity soccer squads.

The leaves may be changing and the temperature is dropping, but the soccer action is heating up for boys and girls varsity soccer squads.

The following is a recap of games that were reported to the newspaper.

Houlton 5, Mattanawcook Academy 0 – At Houlton Tuesday, Sept. 27, Houlton picked up the 5-0 win over MA. Maddie Marino led the way with three goals, Gabby Gentle and Lydia Byron each added a goal and an assist in the win.

Emma McCarthy picked up her sixth shutout of the season in net.

Fort Kent Keeper Mia Voisine made 5 saves on 5 shots and Hodgdon Goalies Madison Smith and Paige Fitzpatrick combined for 12 saves on 15 shots.  Hodgdon dropped to 5-3 and Fort Kent moved to 6-3.

Houlton 13, Calais 0 – At Houlton Friday, the Shires picked up commanding victory over the visiting Blue Devils of Calais. All three seniors scored on their senior night as Maddie Marino booted in four goals; Lydia Byron had a goal and two assists; and Natalie DeLucca scored a goal and had an assist.

Other Shires getting in on the scoring action were Mylee Sylvia, two goals and an assist; Macy Cram, goal and assist; and Gabby Gentle, Alex Collins, Amelia Callnan and Hayley McGuire all with one goal.

Hodgdon 8, Katahdin 2 – At Stacyville Friday, the Hawks spread their scoring out in the first half, scoring six goals to take a commanding lead that Katahdin could not rebound from.

In the second half, Hope Howland and Madison Smith scored for the Hawks. Hunter Hartsgrove had two goals for Katahdin.

MSSM 3, East Grand 1 – At Danforth Saturday, the Penguins of MSSM made the long trek down to Danforth to play the East Grand Vikings and were able to get the 3-1 victory.

For the Penguins, Aubrey Ainsworth had two goals, while Rianna Mattox added a goal and an assist. Luciana Chavez de Pas Solis also had an assist.

Emma Davis scored the lone goal for East Grand, off a pass from Phoebe Foss.

Fort Kent 2, Hodgdon/EG 0 –  At Hodgdon Thursday, the Hawks held Fort Kent to just one goal for much of the game. The Warriors snuck one into an empty net with one second to play for the second goal of the game.

Fort Kent goal scorers were Will Roy and Ethan Daigle with an assist from Roy.

Katahdin 4, Hodgdon/EG 1 – At Stacyville Friday, Katahdin snapped a five-year losing streak against Hodgdon by notching a 4-1 win. Katahdin had goals from Kyle McNally, Jeff Martin, Grady Ritchie, and Calvin Richardson with an assist from Calvin Richardson.

Katahdin keeper Kalan Mann had six saves on 11 shots, while the Hawks’ Drew Duttweiler had 10 saves on 17 shots and Derek Golding had five saves on 8 shots.

Wisdom 2, Katahdin 1 – At Stacyville Saturday, Campden Pelletier scored the game winner for Wisdom in the second half of a competitive contest. He also added an assist on Noah Martin’s goal earlier in the game.

Kalan Mann recorded seven saves on 15 shots for the Cougars, while Kaden Daigle had 13 saves on 14 shots for Wisdom.

Next year's Caribou City Council will include a new member and a longtime councilor thanks to Tuesday's election.
Pets END_OF_DOCUMENT_TOKEN_TO_BE_REPLACED

Everyone who enjoys the company of a dog knows that sometimes dogs have strange behaviors.  They may arrive in your life with the behaviors already in place, or perhaps they are adopted as a puppy and develop a behavior young.
What's Happening This Week END_OF_DOCUMENT_TOKEN_TO_BE_REPLACED