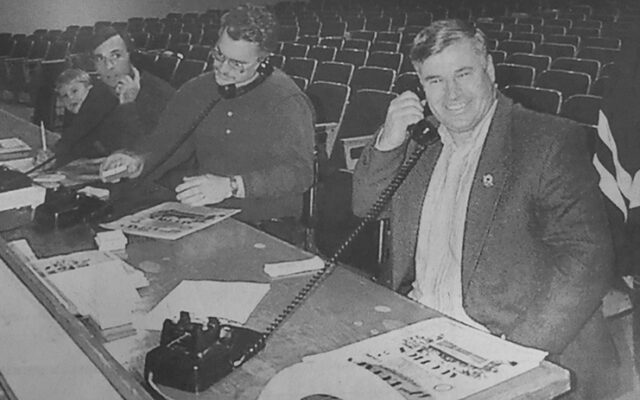 Contributed • November 17, 2022
75 Years Ago - Nov. 13, 1947 Fire causes $275 loss to lodging house — Halloween did not mean cider and cake to everyone in Houlton Friday. Mrs. Glenna L. Kirlin found herself faced with a $275 loss when others were planning parties and dances.

Fire causes $275 loss to lodging house — Halloween did not mean cider and cake to everyone in Houlton Friday. Mrs. Glenna L. Kirlin found herself faced with a $275 loss when others were planning parties and dances.

A fire broke out on the porch of her home at 7 Florence avenue Friday evening, burning most of the porch, the kitchen door and the porch roof. “Less than ten minutes after I had left the porch I noticed the fire,” said Mrs. Kirlin. “I thought of throwing a glass of water on it from the sink first, but then I saw that it was too far underway. I told someone to call the fire department and ran to the cellar and hooked up the garden hose. How I ever got it connected and untangled I don’t know, but I believe that is all that saved the house. I played the hose on the fire until the fire department arrived.” The cause of the fire is unknown.

Highland Avenue bridge will be ready for winter — The residents of the Highland Avenue section of Houlton, who have been long suffering due to the inconvenience they have been forced to undergo while the new bridge across the Meduxnekeag was being built, are given hope that they have only a short time now to wait. State supervising engineer Philip E. Woods, who has been on the job since construction started, said Friday that the new span across the river will be ready for traffic this winter. Although it will not be fully complete until next year, its use during the winter months ahead is an assured fact.

McFadden talks to Boy Scouts — Scoutmaster Allen McFadden of Boy Scout Troop 156 was the guest speaker at the baked bean supper November 11 at the Hodgdon Elementary School. Mr. McFadden spoke to the boys of troop 163 and their parents on the “Organization of Scouting”, which was followed by a film on the Valley Forge Jamboree. Among the guests were assistant district commissioners Edward Goodin and Richard O’Leary of the North Star District.

Sgt. Campbell is assigned to Thailand base — U.S. Air Force TSgt. Walter R. Campbell, son of Mr. and Mrs. Walter A. Campbell of Patten, is on duty at Upon Royal Thai AFB, Thailand. Sgt. Campbell, a security police supervisor, is assigned to a unit of the Pacific Air Forces (PACAF) which provides tactical air power supporting the U.S. and its allies in Southeast Asia and the Far East. Before this arrival in Thailand, he served at Lackland AFB, Texas. The sergeant is a 1957 graduate of Patten Academy. His wife Bonnie is the daughter of Clifford F. Shields of Oakfield.

Chabots earn black belt award – Steve Chabot and sons, Jacob and Caleb, joined the Graves Institute of Self-Defense to get some exercise and have some family fun. Six years of weekly workouts — sweating, stretching, aching, learning, and longing to test for the next belt level — has finally paid off for the Chabot family. Along the way, after all three had achieved the level of brown belt, Jacob went away to college. Steve and Caleb stuck with it, and last month the pair traveled to Torrington, Connecticut, to demonstrate their martial arts skill to the testing board of The United Ketsugo and Karate Association (UKKA). The 12-member board is led by six regional martial arts instructors who are seventh, eighth, ninth and 10th degree black belts. Any black belt who has attained the rank of fifth degree and above is considered a master in their particular style.

Hodgdon’s oldest citizen awarded gold cane — Since 1909, many New England towns have been following the tradition of giving a gold cane to their oldest citizen. But for the town of Hodgdon, that tradition ended when the gold cane disappeared more than 18 years ago. Ruby Sjoberg, a citizen of Hodgdon, has devoted much of her time learning more about the history of the gold canes, and to tracking down the location of Hodgdon’s cane. According to Sjoberg, the gold cane tradition started in 1909, when the publisher of the Boston Post acquired 431 gold headed canes. The heads of the canes were 14K gold, and the canes themselves were made of African ebony, a very black wood. The publisher used the canes as a publicity stunt to boost the sales of his paper. He chose 431 towns within Maine, Massachusetts, New Hampshire and Rhode Island that would receive the gold canes to give to the oldest male citizen. “At the time, the instructions specified male senior citizens,” said Sjoberg. “But in 1934, the post amended the rule so that it included women. By that time, women were voting and times had changed. After finding the missing cane, it was found through research that Betty Lincoln was the oldest resident who resided in Hodgdon. “She received the gold cane as a surprise at our Senior Citizens’s meeting on November 20,” said Sjoberg. “We had invited her whole family and her son, Leonard, presented it to her.” Lincoln, who is 95, was very pleased about winning the award.

Next year's Caribou City Council will include a new member and a longtime councilor thanks to Tuesday's election.
Pets END_OF_DOCUMENT_TOKEN_TO_BE_REPLACED

Everyone who enjoys the company of a dog knows that sometimes dogs have strange behaviors.  They may arrive in your life with the behaviors already in place, or perhaps they are adopted as a puppy and develop a behavior young.
What's Happening This Week END_OF_DOCUMENT_TOKEN_TO_BE_REPLACED