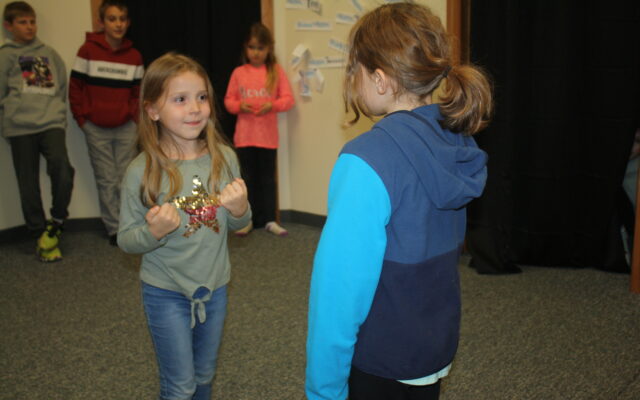 Broadway Kids in The County to perform ‘Frozen Jr.’ in Caribou

Melissa Lizotte • November 23, 2022
Some of The County's youngest performers will bring the popular Disney movie "Frozen" to life onstage at the Caribou Performing Arts Center.

CARIBOU, Maine — Some of The County’s youngest performers will bring the popular Disney movie “Frozen” to life onstage at the Caribou Performing Arts Center.

“Frozen Jr.,” an hourlong play version of the movie, follows Princess Anna as she teams up with a mountainman, a snowman and reindeer to find her sister, Queen Elsa, whose magic powers have placed their kingdom in eternal winter.

Rounding out the principal cast members are: Annie Carlow, 9, of Easton as Olaf the snowman, Jacob O’Clair, 11, of Fort Kent, as Hans, Marleia Stevens, 11, of Caribou as Sven the reindeer and Troy Celik, 11, of Fort Kent as Kristoff.

Based in Caribou, Broadway Kids in The County performs musicals and offers after-school theater programs for elementary and middle school students in central and northern Aroostook.

Playwright Darci Faye relaunched Broadway Kids earlier this year after a three-year hiatus. The group performed a successful run of the musical “Honk Jr.” in August and now nearly half that cast has returned for “Frozen Jr.”

“We thought it would be a great show to perform at Christmas,” Faye said. “It’s a story that all family members can enjoy.”

Tickets for “Frozen Jr.” are available on the Broadway Kids website and will be sold before both performances at Caribou Performing Arts Center. Ticket costs are $15 for VIP guests, $10 for adults, $8 for students and $5 for children ages 4 and younger.

Next year's Caribou City Council will include a new member and a longtime councilor thanks to Tuesday's election.
Pets END_OF_DOCUMENT_TOKEN_TO_BE_REPLACED

Happy fall to you all.  It has been a super beautiful one so far. The harvest has gone well and the temperatures have remained warm, so enjoy these rare days because before long we will be into the winter months, and we all know what that means.
What's Happening This Week END_OF_DOCUMENT_TOKEN_TO_BE_REPLACED