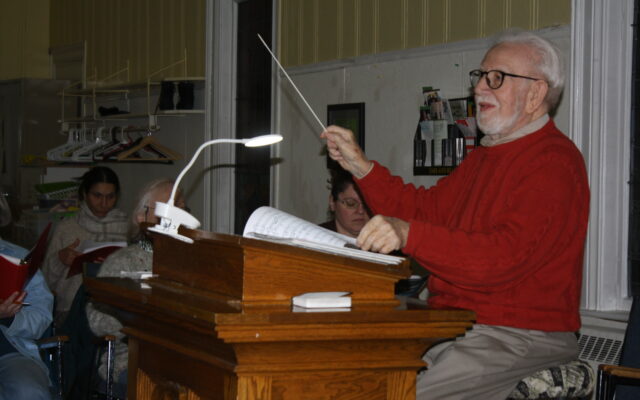 Melissa Lizotte • November 23, 2022
The Caribou Choral Society will return to the stages of Caribou and Presque Isle once again after taking an extended break during the COVID-19 pandemic.

CARIBOU, Maine — The Caribou Choral Society will return to the stages of Caribou and Presque Isle once again after taking an extended break during the COVID-19 pandemic.

The 40-member chorus will perform two free concerts — at 7 p.m. Friday, Dec. 2, at St. Mary’s Catholic Church in Presque Isle and at 3 p.m. Sunday, Dec. 4, at the Caribou Performing Arts Center. Both shows will feature 16 songs centered on the theme “Let’s Share the Holiday Spirit.”

Conductor Dan Ladner of Presque Isle said that there has already been excitement from the local communities about seeing the holiday concerts return.

“People have been asking when the singers would perform again and they have been so pleased,” Ladner said.

The Caribou Choral Society has a long history of performing in Aroostook towns.

In 1976, Caribou’s Bicentennial Chorus performed that summer and got together again under the name Caribou Choral Society at Christmas. Ladner, a former English teacher and drama director at Presque Isle High School, has been the group’s conductor from the beginning.

“Everyone had such a good time that we didn’t want to stop, so we decided to form a community chorus under a new name,” Ladner said. “Our oldest members have been with us for 40 out of the 44 seasons.”

For many of those members, this holiday’s chorus season has been a welcome reunion with friends after being apart during the pandemic.

Doug Giroux of Van Buren has been part of Caribou Choral Society since 1990 after moving to Aroostook County from Portland. A longtime singer with the Portland Symphony Orchestra, Giroux embraced the chance to sing in a group again.

“It’s a wonderful group of people who are all enthusiastic about performing together,” Giroux said.

During a recent rehearsal, Giroux caught up with fellow performer and friend Peter Penny of Plaster Rock, New Brunswick.

Penny joined the choral society in 1991 after another member invited him to come to a rehearsal. He has remained a member ever since.

“Once I started, I knew I was going to stick with it,” Penny said.

That family atmosphere is one that Ladner credits with the group’s successful performances through the years. He said he is grateful that COVID has so far not kept the group from preparing for their shows.

“It was a gamble to restart. We didn’t know if anyone would be interested,” Ladner said. “But I’m so impressed with what has happened.”

Next year's Caribou City Council will include a new member and a longtime councilor thanks to Tuesday's election.
Pets END_OF_DOCUMENT_TOKEN_TO_BE_REPLACED

Happy fall to you all.  It has been a super beautiful one so far. The harvest has gone well and the temperatures have remained warm, so enjoy these rare days because before long we will be into the winter months, and we all know what that means.
What's Happening This Week END_OF_DOCUMENT_TOKEN_TO_BE_REPLACED