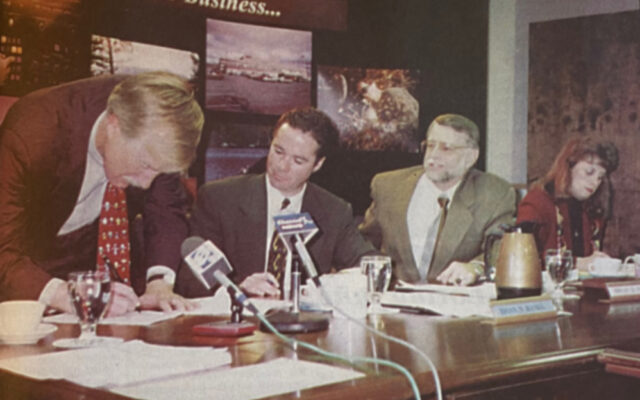 Lanette Virtanen • November 24, 2022
115 Years Ago - Nov. 21, 1907 Several changes being made -- C. P. Hussey is making several changes in the interior of his store, putting in a large number of shelves which will be filled with Edison records. Mr. Hussey is recognized headquarters for Edison phonographs and supplies.

Several changes being made — C. P. Hussey is making several changes in the interior of his store, putting in a large number of shelves which will be filled with Edison records. Mr. Hussey is recognized headquarters for Edison phonographs and supplies.

New store has a great crowd — Shaw & Mitton’s new store was visited by a large crowd last Saturday, the formal opening to the public of their enlarged and well-planned grocery, and many favorable comments were made. Refreshments were served throughout the day.

New owners — Mrs. Newcomb Baird has purchased the Lawrence Thibodeau restaurant on Sweden Street, formerly known as the Caribou Cafe. Mrs. Baird has already opened the restaurant and is ready to serve the public and is meeting with a very generous patronage.

A new dentist in town — Dr. N.S. Lowrey, a graduate of Harvard Dental School, has decided to locate in Caribou, and will open his office in the Mitton, Poland & Bishop block on Friday of this week. Dr. Lowrey is a son of Dr. F.W. Lowrey of Presque Isle, one of that town’s well-known dentists.

Golden wedding observed — The golden wedding anniversary of Mr. and Mrs. D.D. Powers was celebrated at their home with a reception that was one of the outstanding pirates of the last few years. Mr. and Mrs. Powers received in the spacious living room which was decorated with flowers that were gifts of their many friends and relatives, while appropriate music was  furnished by Mrs. F.L. Gregory, who alternated between the organ and piano. Mr. and Mrs. Powers were married on November 17, 1897 in the parsonage of the Universalist Church, Caribou by the Rev. Stanford Mitchell.

Local publisher attending NEA Chicago meeting — Charley Helfenstein, president of the National Editorial Associate, is in Chicago this weekend for the annual fall business sessions  of that organization. The publisher of the Republican left Caribou Monday to reach the “Windy City” for a meeting of the NEA board of directors Wednesday and to ‘sit in’ on separate gatherings of some of the NEA’s 20 committees. Helfenstein will preside during the business programs of Friday, Saturday and Sunday. In addition to topical discussions by 27 publishers, representing 9,000 U.S. weekly and 1,100 smaller daily newspapers.

Scholarship — Jonathan Sprague, a freshman electrical engineering major has been awarded the Dean’s Engineering Scholarship from Northeastern University. Sprague is a 1997 graduate of Caribou High School.

Golden anniversary — Mr. and Mrs. Ted Thibodeau were honored at a surprise 50th wedding anniversary backyard barbecue July 12, 1997 given by their seven children at the home of their daughter, Bonnie, son-in-law Harold Turck and grandson Shawn Lahey of Caribou. Mr. and Mrs. Thibodeau will celebrate their 50th anniversary on Nov. 25.

Next year's Caribou City Council will include a new member and a longtime councilor thanks to Tuesday's election.
Pets END_OF_DOCUMENT_TOKEN_TO_BE_REPLACED

Everyone who enjoys the company of a dog knows that sometimes dogs have strange behaviors.  They may arrive in your life with the behaviors already in place, or perhaps they are adopted as a puppy and develop a behavior young.
What's Happening This Week END_OF_DOCUMENT_TOKEN_TO_BE_REPLACED