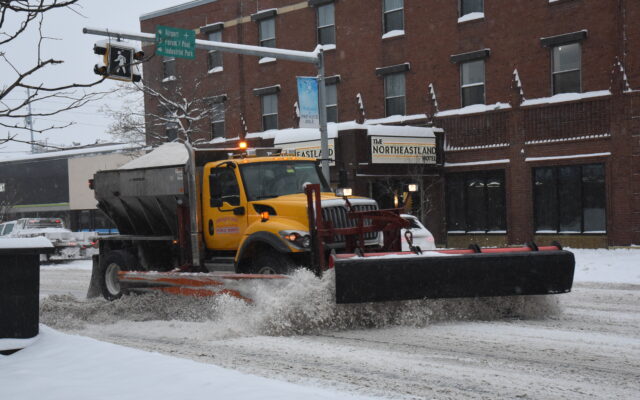 Jessica Potila • January 13, 2023
More than a foot of snow fell in parts of northern Maine Thursday night into Friday and is expected to stick around.

AROOSTOOK COUNTY, Maine – A winter storm Friday was welcomed by snowmobile enthusiasts as it brought enough to blanket the trails.

More than a foot of snow fell in parts of northern Maine Thursday night into Friday and is expected to stick around, said National Weather Service meteorologist Victor Nouhan.

By 10 a.m. Friday Presque Isle recorded about 12 inches of snowfall, Caribou 13 and Fort Kent 15 inches, with a possible total accumulation of up to 20 inches in parts of The County.

“For those people looking to do snowmobiling, this might be their entry for that up here,” Nouhan said.

Fort Kent SnoRiders Snowmobile Club President Matthew Collin said the heavy snowfall is exactly what was needed to get the snowmobile season going.

“This will absolutely make the trails 100 percent. That said, there will still be thin cover in the fields since we started with nothing there,” Collin said. “If you sit on I-95 northbound tomorrow morning there will be a convoy of trucks hauling their snowmobile trailers north, guaranteed.”

“I would expect everyone to go out tonight and pan or drag the trails, not necessarily groom the trails. That removes air from the snow and produces a packed layer which provides a base for new snow to fall on top,” he said.

In Caribou, the 13 inches of snow that had fallen by late Friday morning made for good trail grooming conditions, noted Parks & Recreation Superintendent Gary Marquis.

“I got one groomer out there right now and another one ready to get started,” Marquis said. “I think most clubs will have started grooming by tonight.”

Since news of the heavy snowfall spread, Marquis has gotten numerous calls from snowmobile enthusiasts asking when the trails will be set for riding.

Marquis expects most trails north of Mars Hill to have enough snowpack by Monday. But he warned riders that the snowpacks will resemble the “early season” conditions of a typical December rather than what they normally experience in January.

“I wouldn’t be crossing any lakes right now. The inlets seem to be frozen but the bigger, more open areas are not,” Marquis said.

Plus, the lighter snowpack could make for a bumpier ride, with more gravel and rocks underfoot.

“This [storm] is our first big snow, so the clubs are just getting out there to groom. There will be hazards underneath the snow that you can’t see,” Marquis said.

Collin said it would be best for snowmobilers to wait until the trails are marked before venturing out on their machines, and encouraged caution once they do.

“I know everyone is eager to hit the trails but we must be cautious and watch for those volunteers working on the trails,” he said.

Although a boon for winter tourism in northern Maine, the snowstorm also proved disruptive. Several schools, town offices and businesses closed for the day to keep people home safe.

The Aroostook County Sheriff’s Office reported multiple passenger vehicles and tractor-trailers off the roadway including one that flipped over on Route 161 in Madawaska Lake. No injuries were reported involving that crash.

Next year's Caribou City Council will include a new member and a longtime councilor thanks to Tuesday's election.
Pets END_OF_DOCUMENT_TOKEN_TO_BE_REPLACED

Nearly anyone who has ever had puppies or dogs can relate to “The Zoomies.” The zoomies are defined as those sudden bursts of pent-up energy that cause dogs to run at breakneck speeds back and forth or around and around, or sometimes in a tight little circle.
What's Happening This Week END_OF_DOCUMENT_TOKEN_TO_BE_REPLACED