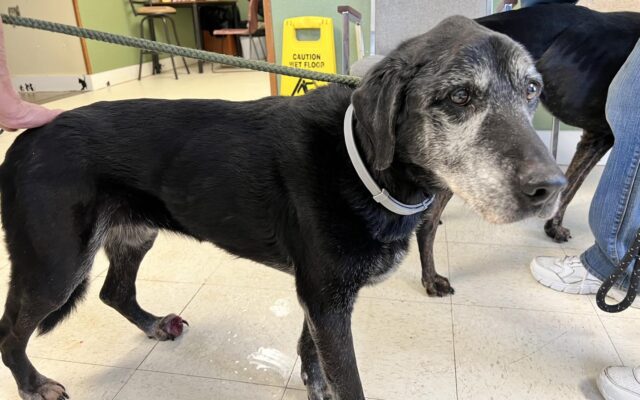 Presque Isle resident Natanya Pictou found the likely black lab mixes on Doyle Road. She stayed with them outside her vehicle until a Caribou police officer arrived and brought them to the Central Aroostook Humane Society, located in Presque Isle.

Gahagan did not release the suspect’s name or potential charges because police are still investigating.

Both dogs were “very skinny” and appeared malnourished when they arrived at the station, Sgt. Keith Ouellette said. One had exposed ribs and a tumor growing on one of its legs.

Officials with the Central Aroostook Humane Society were not available Wednesday.

This is the second instance of animal neglect Caribou police have investigated in the last two months.

In November, police arrested Matthew Guzman, 31, of Caribou after a likely pitbull mix was found locked inside a closet of a home that was being renovated.

Guzman, the dog’s owner, now faces charges of animal cruelty, a misdemeanor for which he could receive up to 364 days in prison, a fine of no less than $500, and be banned from possessing animals in the future.

Gahagan urged the public to notify law enforcement when they suspect an animal is lost, abandoned or being neglected.

Pictou set up a Go Fund Me page for the dogs’ medical treatment.

Correction: A previous version of this story misstated Pictou’s residency and where the dogs were taken when found.

Next year's Caribou City Council will include a new member and a longtime councilor thanks to Tuesday's election.
Pets END_OF_DOCUMENT_TOKEN_TO_BE_REPLACED

When I wrote the first story of our dog Odie, I didn’t know that I would write a Part 2, but there were so many more stories that I decided more of this little dog’s story needed to be told.
What's Happening This Week END_OF_DOCUMENT_TOKEN_TO_BE_REPLACED