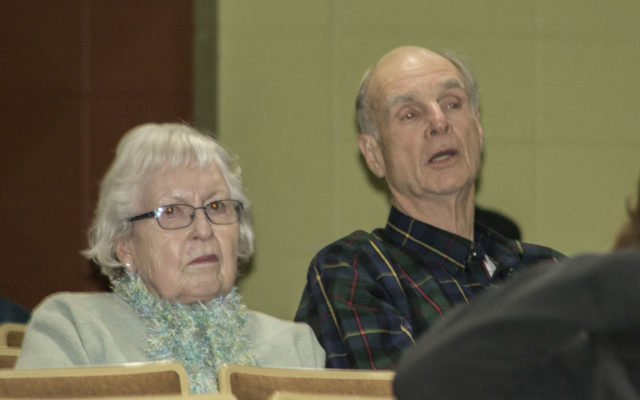 Chris Bouchard • March 31, 2017
A citizen committee was formed when RSU 39 (Caribou, Limestone and Stockholm) officials spoke to Limestone residents about sending their grades 9-12 students to Caribou in an effort to offset a $1.4 million loss in funding for the 2017-18 school year.

LIMESTONE, Maine — A citizen committee was formed when RSU 39 (Caribou, Limestone and Stockholm) officials spoke to Limestone residents about sending their grades 9-12 students to Caribou in an effort to offset a $1.4 million loss in funding for the 2017-18 school year.

Since the March 15 RSU 39 meeting, the committee has circulated a petition regarding withdrawal from the RSU, which Limestone’s Board of Selectpeople accepted Tuesday night, March 28.

Ventresco added that, when towns receive a petition, they are essentially “obliged to accept it and move the objective forward,” provided the petition is in “good form and does not request anything illegal from the town.”

Both Ventresco and RSU 39 Superintendent Tim Doak say the withdrawal process is a long and arduous one.

Ventresco says no specific dates are set for a town meeting in which residents can vote on withdrawal, but says it will take place in May.

Looking forward, Ventresco says the RSU 39 will hold an official vote to move Limestone’s high schoolers to Caribou during their Wednesday, April 5 meeting. As of March 29, an agenda for this meeting has not been released.

“We’re going to send (RSU 39) a letter asking them to postpone the meeting,” Ventresco said. “It’s a pre-process request to see if they will maybe come back to the table and hold off on the decision for a while.”

With Limestone being one of three towns in RSU 39, educational expenses are shared among each community. The town manager said that he and committee members are currently crunching numbers to determine the potential impact withdrawal could have on the mill rate and taxes in Limestone.

RSU 39 Superintendent Tim Doak said the withdrawal process can take up to a year and a half, adding that he is cooperating with Limestone and providing any documentation they need to determine if withdrawal is in their best interest.

“There are a lot of unforeseen inefficiencies that can go along with running an older school building,” Doak said. “RSU 39 has been helping replace (Limestone Community School’s) floors, bleachers, and windows over time, but when you go out on your own it can be very expensive.”

Doak added that he believes Limestone, as a town, has the right to withdraw from RSU 39.

RSU 39 predicts moving Limestone students to Caribou will save the district $600,935.26 annually.

Ventresco, town officials, and committee members are looking into all options at this point, from joining another MSAD, Union, or RSU, to running their own school system or partnering with other schools.

“The main thing we’re doing now is gathering the facts and numbers we have to see what’s going to happen with the mill rate,” Ventresco said, “and find an option that best suits taxpayers and students.”

Only one member of Maine’s congressional delegation had come out in favor of impeaching President Donald Trump ahead of House Speaker Nancy Pelosi’s Tuesday announcement that the Democratic-led House of Representatives would begin an impeachment inquiry.
Pets END_OF_DOCUMENT_TOKEN_TO_BE_REPLACED

We think a cat can make for the best pet in the world. To truly love a cat, you must learn to accept them for what they are -- unpredictable and quirky, which is something unique and unlike any other pet.
Campaign Corner END_OF_DOCUMENT_TOKEN_TO_BE_REPLACED