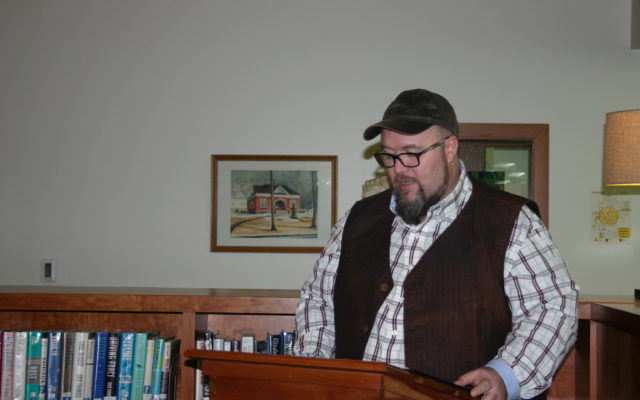 PRESQUE ISLE, Maine — The Mark and Emily Turner Memorial Library in Presque Isle became a gathering place for local published and aspiring writers on Thursday.  The fifth monthly Local Writers’ Night at the Library featured five writers from Aroostook County who shared both old and new work and advice for those with writing ambitions.

Local Writers’ Night at the Library began when published author and Presque Isle resident Alice Bolstridge talked with library administrators about holding a book reading for her recently published poetry chapbook “Chance and Choice.”  Bolstridge was unable to attend Thursday night’s event, but shared with The Star-Herald how the Local Writers’ Nights originated.

“It occured to me that other local writers I have met through the GATHER group through Maine Writers and Publishers Alliance might like to join me, so I invited them,” Bolstridge said.  “I thought it would be a one-night event, but there were so many writers that wanted to be involved that I arranged two and then it become a monthly series.”

Due to personal obligations, Bolstridge has handed over the duties of event moderator to local mystery/thriller author Vaughn Hardacker from January through April. Thursday night’s gathering began with Presque Isle resident Larry Bubar reading many poems, including “Stature,” “The Hallway of Nightmares” and “The Brave and the Foolish.” He also has written children’s books.

“I started writing 10 or 12 years ago,” Bubar said. “I self-publish my work, but I usually give away a lot of books to people I know.”

Audience member Jim Pritchard of Chapman told Bubar, “I admire how you can write poems that are both serious and funny.”

Presque Isle native Lloyd Archer pleased the audience with a reading of his short story, “Options,” about a man who returns to his hometown in northern Maine after losing his job and reconnects with a former classmate.

“When I turned 50 I decided to see if I could write 50 poems,” Archer said.  He has since published four poetry chapbooks and has had another short story published in the “Goose River Anthology.”

“I like how you do a good job depicting people’s lives in northern Maine,” Anthony Scott, another presenter, said to Archer.

Scott is an English instructor at the Maine School of Science and Mathematics in Limestone and author of the poetry chapbook, “The Year Things Came Apart,” published in 2016.

Scott read many new poems that have yet to be published, including some inspired by his experiences with students, writing, religion and sharing important life lessons with his children.

Regina Bowie, of Presque Isle, read two unpublished poems, “January 2017” and “Nor’easter” that were inspired by northern Maine winters.  Bowie said that she has been writing since her elementary school days in Scarborough,but has only started to seriously pursue her creative interests in the past two years.

The final presenter of the night, Vaughn Hardacker, read from the first chapter of his third novel, “Black Orchid,” a thriller that follows New Hampshire Private Investigator Ed Traynor as he travels to California in search of Melinda Hollis, the missing daughter of a wealthy local family.  Hardacker has based all four of his published thrillers on real-life crimes.  “Black Orchid” was based on an unsolved case in which a young woman’s remains were found in California.

Hardacker will release his fifth thriller novel, “My Brother’s Keeper,” a prequel to “Black Orchid,” in fall 2018 and his current novels can be purchased on www.amazon.com.  Along with a reading from “Black Orchid,” he shared his advice for aspiring writers.

“Write everyday, even if it’s only a paragraph, and read with an eye toward craft and style,” Hardacker said. “Don’t expect success overnight.  It takes many years for anyone to become better at their craft and to get published.”  For those interested in pursuing creative writing seriously, he recommended that they read Stephen King’s book “On Writing.”

Hardacker has plans to hold the next Local Writers’ Nights at the library in February, March and April, with the official dates to be announced in the near future.  Anyone interested in participating as a writer or becoming part of the email notification list for events can contact Hardacker at vhardacker@gmail.com. 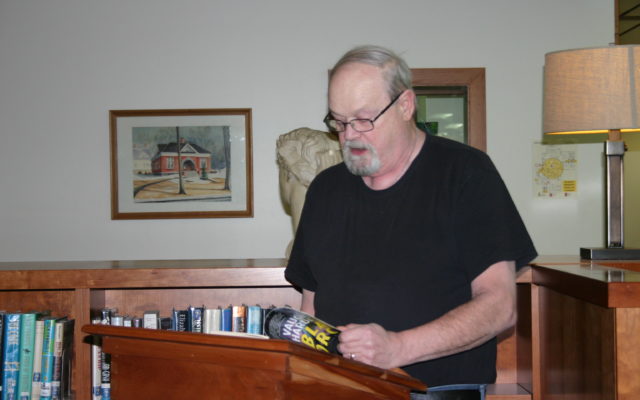 Published thriller author Vaughn Hardacker reads from his third novel, “Black Orchid,” during the fifth Local Writers’ Night at the public library in Presque Isle on Thursday, Jan. 11. Hardacker has published four thrillers and will publish his fifth, “My Brother’s Keeper,” in fall 2018.
(Melissa Lizotte) 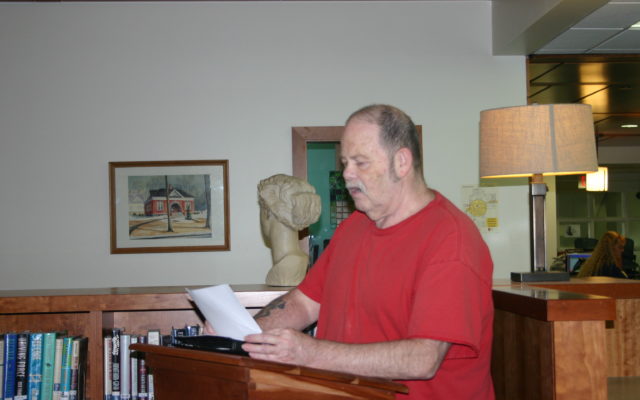 Larry Bubar of Presque Isle reads one of his many self-published poems during the fifth Local Writers’ Night held at the Mark and Emily Turner Memorial Library in Presque Isle on Jan. 11. The writers’ gatherings, which were started in July 2017 by local author Alice Bolstridge, have become opportunities for local writers, both published and aspiring authors, to share work and give advice to those pursuing a writing life. (Melissa Lizotte) 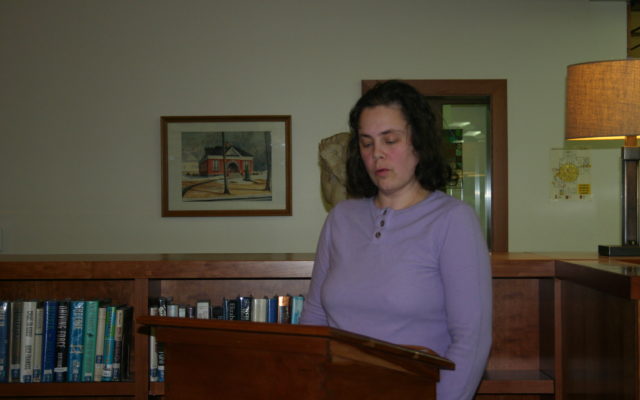 Regina Bowie reads her poem “Nor’easter” during the fifth Local Writers’ Night at the public library in Presque Isle on Thursday, Jan. 11. Bowie has been writing since she was in elementary school and has begun to pursue creative writing more seriously during the past two years.
(Melissa Lizotte) 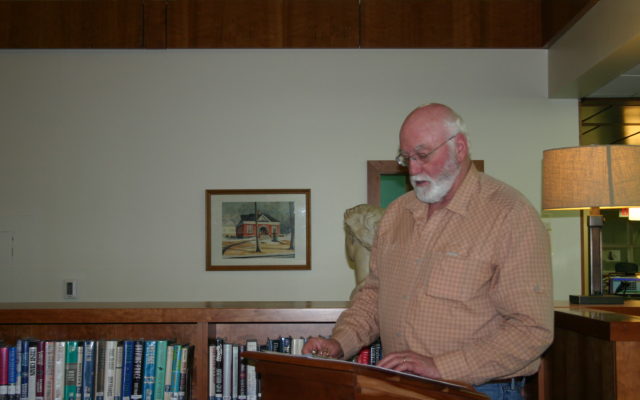 Lloyd Archer reads his short story “Options” during the fifth Local Writers’ Night at the public library in Presque Isle on Thursday, Jan. 11. Archer has published his poetry in four chapbooks and has had a short story included in the “Goose River Anthology.” (Melissa Lizotte)

Members of the Houlton Band of Maliseets will head to the ballot box in order to determine who will be elected as their new tribal chief.
Pets END_OF_DOCUMENT_TOKEN_TO_BE_REPLACED