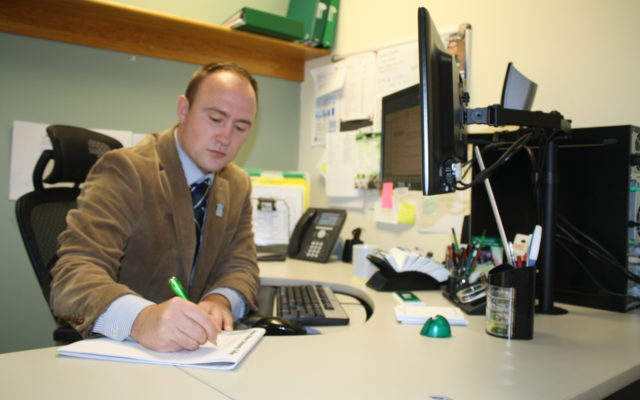 PRESQUE ISLE, Maine — When Griffin Goins, Northern Maine Community College’s new associate director of development and college relations, and his wife, Devina, were looking for a small, rural New England town to settle into, the former Los Angeles residents quickly realized that Aroostook County had much to offer their family.

“We had known for several years that we wanted to move to New England and after a while we narrowed the search to Maine,” Goins said. “At one point I visited Portland, but it wasn’t what we were looking for. It was still a city.”

But after Goins came across the description for his current position at NMCC, he and Devina researched Presque Isle and Aroostook County online and were immediately attracted to the close-knit community and school systems that they read about. Goins said that when he first came to Presque Isle for his job interview at NMCC he “fell in love” with the town.

He and Devina as well as their daughters — Harper, 14, and Georgette, 2 ½ — have now lived in Presque Isle for several weeks. They arrived just in time for Harper to begin her freshman year at Presque Isle High School and for Goins to settle into his new role at NMCC, which includes promoting the college’s programs and community offerings through press releases and social media and other forms of advertising.

Goins was impressed with the NMCC campus upon visiting and now wants to spread awareness about the positive impact that the college can have on students and their families.

“Even though it’s in a relatively remote area of the state, NMCC has state-of-the-art technology and high-quality faculty and support for its students,” Goins said. “I want to be able to show people what an incredible resource NMCC is to the community.”

That “sense of community” is something that Goins said he had not quite felt in other places where he and his family have lived. Goins was born in Michigan but raised in Oregon, where he earned a bachelor’s degree in magazine journalism from the University of Oregon. He has worked as a freelance writer for various magazines and in project management. Before coming to NMCC, he spent four years as the marketing manager for Paramount Pictures in Los Angeles.

One difference between California and Maine that hasn’t taken long for Goins to notice is the major drop in temperatures, even during the summer months.

“When I got the call from President (Tim) Crowley about how well the interview went and that they were moving forward with me as a candidate, it was 115 degrees in Los Angeles. And this was in July, not even the hottest month,” Goins said. “The whole family is excited about the four seasons and we’ve been getting ready for winter. Georgette has never seen snow before.”

Having an abundance of nature and beautiful scenery was a major draw to the area for the Goins family. They recently took their first kayaking trip on Scopan Lake and are looking forward to going fishing together for the first time. Goins said that the warm atmosphere and friendly people are two of many attributes that could attract more families from out of state to Aroostook County.

“This has been a big transition for us and we really can’t say enough about how welcoming people have been. It’s very heartwarming,” Goins said. “I think there are a lot of families in cities like Los Angeles that could be looking for places like Aroostook County.”

A few years back the Ark was gifted with something that we never dreamed possible. It is a gift that left us speechless and opened a whole new door for us.
Campaign Corner END_OF_DOCUMENT_TOKEN_TO_BE_REPLACED