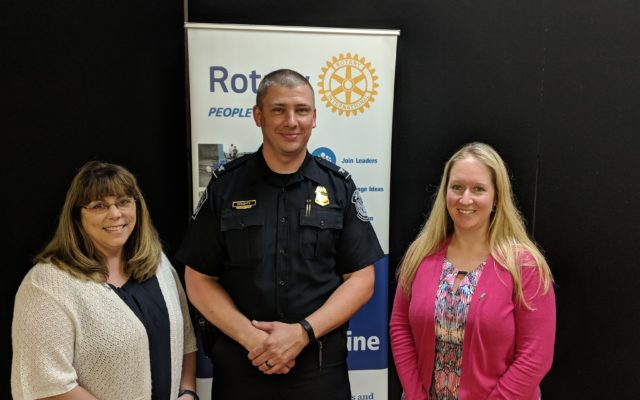 The guest speaker of the day was Christopher Doughty, hosted by Rotarian Katie Hill. Doughty is the port director at the United State Customs and Border Protection branch in Houlton. There are 24 land border crossings of the United States Customs and Border Protection on the Maine border. CBP has a mission to safeguard America’s borders and protect the public from dangerous people and materials and enhance the nation’s global economic competitiveness by enabling legitimate trade and travel.

Doughty grew up in Fort Fairfield. He has a bachelor of science degree from the University of Presque Isle.

He was a border patrol agent in Nogales, Arizona and after an 18-month process he was hired as a Border Patrol Agent in Maine.

Doughty gave a brief history of the CBP. In 1789, the fifth act of the first congress established Customs. In 1862 the United States Department of Agriculture was created to propagate and distribute new and valuable seeds and plants and this was expanded in 1912 to cover plant protection and a quarantine program at ports of entry as the Federal Horticultural Board was formed.

In 1904, the U. S. Immigration service was assigned a small force of mounted inspectors to patrol the border to prevent illegal crossings and by 1924 Congress established the U. S. Border Patrol as part of the Immigration Bureau.

On a typical day nationwide over one million passengers and pedestrians are processed by CBP as well as around 283,000 privately owned vehicles and 78,000 trucks. This takes a staff of around 60,000 employees, 23,000 of which are CBP. The agency operates in 50 countries and has 328 ports of entry and 20 Houlton field offices. The Houlton port operates on a 24 hour, seven day a week schedule and an average day for the entire Houlton area of operations sees approximately 3,000 passenger vehicles, 400 trucks and one train. In an average year one million passenger vehicles cross and there are around 150,000 commercial vehicles crossing.

The agency is currently short staffed. The application process now takes around eight months and the training in Georgia is a 19-week course. The average time for a new hire to complete all  phases of training is one year. More information can be found on the U. S. Customs and Border Protection website.

Rotarian Joyce Fitzpatrick hosted her guest Karen Reynolds who is running for the Senate seat in District 2. Rotarian Max Lynds hosted his guest Erica Johnston who is a new employee of the F. A. Peabody in Presque Isle.

Only one member of Maine’s congressional delegation had come out in favor of impeaching President Donald Trump ahead of House Speaker Nancy Pelosi’s Tuesday announcement that the Democratic-led House of Representatives would begin an impeachment inquiry.
Pets END_OF_DOCUMENT_TOKEN_TO_BE_REPLACED

Recently we had a young man attend one of our board meetings to express an interest in helping the animals.
Campaign Corner END_OF_DOCUMENT_TOKEN_TO_BE_REPLACED