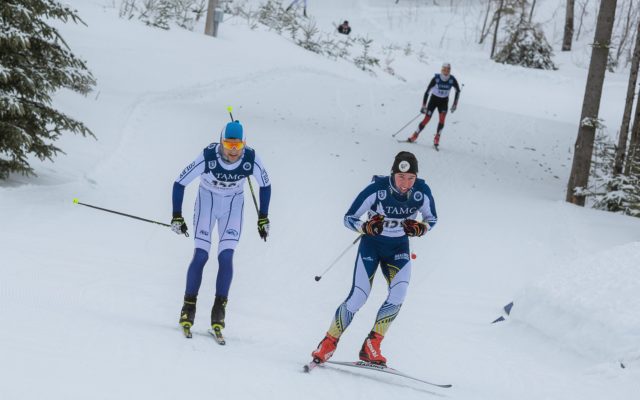 Anthony Brino • October 9, 2018
Several ski trails at the Nordic Heritage Center are being changed and widened as part of a plan for the four season trail center to host new college and Olympic-level ski races, as well as another World Cup Biathlon.

PRESQUE ISLE, Maine — Several ski trails at the Nordic Heritage Center are being changed and widened as part of a plan for the four season trail center to host new college and Olympic-level ski races, as well as another World Cup Biathlon.

“Anyone who’s in the hunt to get enough points to make the Olympic team, whichever Olympic team they’re on, will be coming to this race,” said Chasse, a former cross country ski coach who also owns Bike, Board & Ski in Presque Isle.

The event is the final leg of a 10 race national championship circuit, and in order to host it, the nonprofit trail center had to have some of its trails changed to meet the race’s certification of the International Ski Federation, or FIS.

Crews recently completed timber harvesting and corridor clearing at the center as part of having 6.5 kilometers of ski trails FIS certified. This fall, crews also will do some earth work on the trails to change some slopes and other patterns.

A view of the Rotary Loop trail at the Nordic Heritage Center in Presque Isle during a snowy day Dec. 15, 2016. (Anthony Brino)“We can’t get the super tour without doing what we’re working on,” Chasse said.

Changes include widening, straightening and banking of corners on turns on sections of the Rotary Loop trails.

“You have to have so much elevation climb within a certain run of distance,” Chasse said of the trail changes and FIS requirements. “To get enough elevation rise at the small mountain were on, in the distance they wanted, we had to take some of the corners out and make them more aggressive climbs.”

With the new trail work, the Nordic Heritage Center will have trails certified by both the FIS and the International Biathlon Union, the organization governing the biathlon competition that has previously been hosted at the center in Presque Isle as well as the Fort Kent Outdoor Center.

While the FIS races are strictly Nordic ski races, whereas biathlon includes sharpshooting, the new trail work could help the Nordic Heritage Center host another World Cup Biathlon in the coming years.

“Everything we’re doing for this FIS certification will be looked upon favorably by the IBU,” Chasse said.

The Nordic Heritage Center is applying to host another World Cup Biathlon and is able to submit applications for the next six years, Chasse said.

“We’re trying. We’re bidding and got our license extended for six years,” Chasse said. “The issue we’re faced with is four more venues got their licenses this year and are coming online: venues like Soldier Hollow, an Olympic venue in Utah, Lake Placid, one in Michigan, one in Canada.”

While the Nordic Heritage Center didn’t get selected for a World Cup site for 2019, Chasse said the center’s leaders are optimistic about having one in the coming years.

“We have reason to believe that we’ll get one within the next six years, because they extended our license for six years. They don’t do that unless they have an idea that they want to use you.”

The other venues may have their own advantages, such as being closer to major population centers. But the Nordic Heritage Center has its own strong attributes, including a successful track record hosting the event, an average of seven feet of annual snowfall and good skiing conditions that often stretch into mid-April.

“By the end of March, Lake Placid’s snow is running down the hill,” Chasse said. “You could be skiing virgin powder here.”

Editor’s note: A previous version of this article misstated that the Nordic Heritage Center would be the only FIS certified course in New England. Its certification pertains to the race.

Maine is more than eight months into Medicaid expansion under the federal Affordable Care Act and trends around who is enrolling and where they live are starting to emerge, bucking some expectations and pointing out access challenges.
Pets END_OF_DOCUMENT_TOKEN_TO_BE_REPLACED