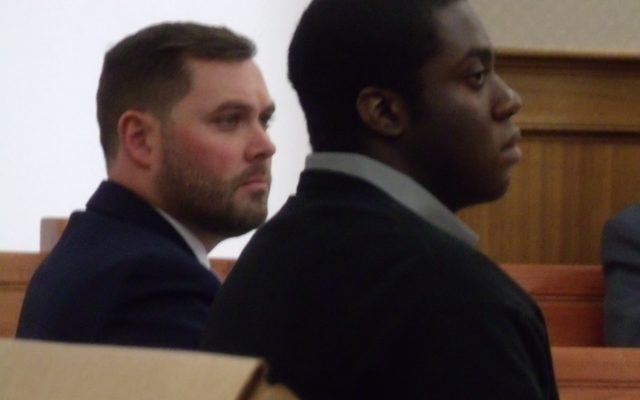 Jen Lynds • November 14, 2018
A Massachusetts man who has pleaded guilty to a robbery charge connected to the death of an Oakfield man more than two years ago testified Wednesday that he knew he was going to help steal drugs from the victim even before he got to Maine.

HOULTON, Maine — A Massachusetts man who has pleaded guilty to a robbery charge connected to the death of an Oakfield man more than two years ago testified Wednesday that he knew he was going to help steal drugs from the victim even before he got to Maine.
Darin Goulding, 29, of Leominster, Massachusetts, testified on the second day of the murder trial against Marcus Asante, 23, of Fitchburg, Massachusetts, in Aroostook County Superior Court in Houlton.
Asante is accused of fatally shooting Douglas Morin Jr., 31, on Oct. 16, 2016. Prosecutors allege that Asante is the one who pulled the trigger as Morin sat in his Lincoln Town Car on the PD Road in Sherman. Two other individuals, Goulding and Tia Leigh Ludwick, 24, also of Leominster, Massachusetts, also were implicated in the crime.
Goulding pleaded guilty in February to robbery in exchange for the state dismissing a murder charge against him if he agreed to testify against Asante. Brian Kelley, the Massachusetts defense attorney representing Asante, told jurors that Goulding’s testimony resulted from a plea deal and that he had changed his story about the events of that day. Goulding has not been sentenced yet.
Ludwick pleaded guilty in February to murder and robbery and was sentenced in April to 17 years in prison.
According to Assistant Attorney General Donald Macomber, Ludwick, who was Morin’s cousin, contacted Morin about buying ten pounds of marijuana.
On the stand Wednesday, Goulding detailed the ride to Maine with Asante and Ludwick. He said that he had known Asante for about two years before the accused contacted him about going on “a drive.” He said that he “knew it was going to be a robbery” and that the victim would be “some girl’s cousin.”
Goulding testified that he didn’t know Ludwick, or Tiffany Manuel, the Massachusetts resident who drove Ludwick, Asante and Goulding to Maine.
“Tia [Ludwick] said it was going to be easy,” Goulding testified, adding that he expected to get drugs and money for helping to rob Morin.
Goulding said that he, Asante and Ludwick formulated a plan that involved robbing Morin in his Lincoln Town Car. He said that Asante planned to “grab him from behind,” while Ludwick stole the marijuana and his keys and Goulding made sure that Morin “didn’t grab Tia.”
Court ended for the day, however, before Goulding could testify about what happened in the car.
Earlier Wednesday, Manuel testified about what she could recall about the trip to Maine. She punctuated much of her testimony with, “I don’t remember,” and said that she didn’t recall much of the drive from Massachusetts to Maine. She said that Morin initially wanted to sell Ludwick, Asante and Goulding the drugs from inside an abandoned house in Sherman, but she said that the group was leery of that and refused to go in. They also were surprised to see that two other men had accompanied Morin for security in a separate vehicle. The Massachusetts group initially indicated that they did not want to make the purchase after seeing the other men present, but then agreed to it after Morin sent the two men away, because he “needed the money,” according to the prosecutor.
After agreeing to make the drug buy, the Massachusetts group drove with Morin to the PD Road, which is a rural woods road and was the second location the victim chose for the transaction.
The two men who had been with Morin earlier did not witness the shooting but watched the group leave from a distance after the murder, according to Assistant AG Macomber.
Macomber said that Asante was sitting in the back seat of the Lincoln and shot Morin, who was in the driver’s seat, multiple times.
Maine’s former deputy medical examiner, Dr. Claire Bryce, detailed for jurors on Tuesday the nine gunshot wounds she found during Morin’s autopsy, including fatal head and neck wounds.
Macomber said that the marijuana stolen from Morin was found in an apartment that Asante shared with Ludwick, and that the gun used in the murder was found in Asante’s closet. He also said that bullets retrieved from Morin’s body were “consistent” with ammunition found in Asante’s possession.
Kelley told jurors that the state does not have Asante’s DNA on the firearm. He also maintained that Asante did not live with Ludwick but only “frequented” her apartment. He objected to several pieces of evidence introduced Wednesday and questioned a Massachusetts State Police trooper who searched Ludwick and Asante’s apartment about slight discrepancies over how seized items were described in evidence logs and how they appeared in pictures taken by police. Justice Harold Stewart II, who is presiding over the case, allowed the evidence to be introduced.
Goulding is expected to resume testimony Thursday. Assistant Attorney General John Alsop also is prosecuting the case, and Asante is being co-represented by Attorney Adam Swanson.

Next year's Caribou City Council will include a new member and a longtime councilor thanks to Tuesday's election.
Pets END_OF_DOCUMENT_TOKEN_TO_BE_REPLACED

Everyone who enjoys the company of a dog knows that sometimes dogs have strange behaviors.  They may arrive in your life with the behaviors already in place, or perhaps they are adopted as a puppy and develop a behavior young.
What's Happening This Week END_OF_DOCUMENT_TOKEN_TO_BE_REPLACED