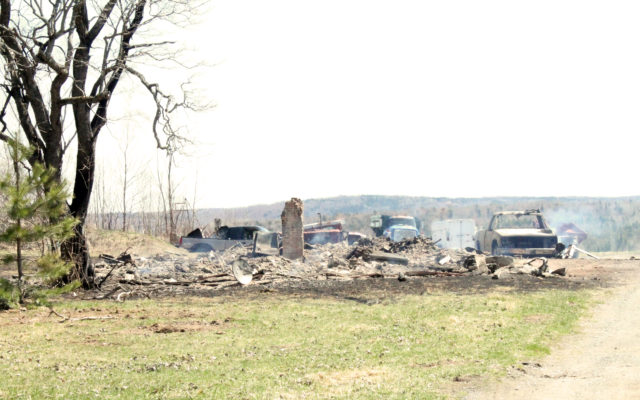 Melissa Lizotte • May 9, 2019
Fire ravaged an unoccupied family farmhouse in Easton during the early morning hours Thursday, May 9.

At 4:30 a.m., the Easton Fire Department responded to a call from a passerby, who stated that a farmhouse at 139 Henderson Road was engulfed in flames. Firefighters rushed to the scene with two engine trucks and two rescue pick-up trucks, as well as a tanker truck provided by the Fort Fairfield Fire Department, but could not save the home.

“There was nothing we could do at that point,” said Easton fire chief Gregory White. “We have contacted the state fire marshal’s office and the fire is under investigation.”

White said that crews from Emera Maine were on hand to remove downed power lines from the scene.

According to the Easton Town Office, the farmhouse was owned by Richard Henderson of Easton. No one had been living in the home but the Henderson family had been working to complete interior renovations.

Forbidden foods for our four-legged friends are many and can be very dangerous if ingested. Sometimes, we give our pets leftovers or what we consider treats. According to many sources, some human foods can make an animal very sick, and in certain cases can even be lethal.
What's Happening This Week END_OF_DOCUMENT_TOKEN_TO_BE_REPLACED