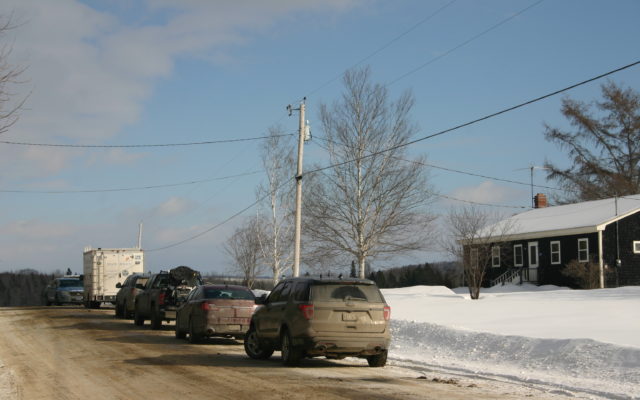 Jen Lynds • June 6, 2019
James Peaslee of Easton is on trial before a jury in Aroostook County Superior Court in Houlton on charges of murder and using a firearm to intentionally or knowingly cause the death of his stepfather.

HOULTON, Maine — Concerned about his personal security and that of his Bridgewater property, Paul Hilenski Sr. was given an extensive home security package by one of his sons as a gift.

It turned out to catch still and video images of the man who walked up to his home, stood on the front steps, and shot him to death on Jan. 17, 2018.
The state contended in opening arguments Thursday that the killer was his stepson, 38-year-old James Peaslee of Easton. Peaslee was indicted on charges of murder and using a firearm to intentionally or knowingly cause the death of Hilenski. He pleaded not guilty and is being represented in Aroostook County Superior Court in Houlton by attorneys Stephen Smith and John Tebbets. Testimony began Thursday afternoon after a jury was seated before Superior Court Justice Harold Stewart III.
Assistant Attorneys General Leanne Robbins and Robert “Bud” Ellis contend that Peaslee was furious over a probate decision involving the estate of his mother, Janet Hilenski.
Paul Hilenski Sr. had moved to Bridgewater from North Anson and married Janet Hilenski, and they lived at the 227 Boundary Line Road property where he was killed. Janet Hilenski died without a will after a November 2015 car crash.
Phil Jordan, a Houlton attorney, testified that Hilenski Sr. met with him the day after his wife’s death to see about becoming personal representative for her estate. He testified that he met Peaslee in 2016, who he described as “agitated.”
“He asked me, ‘do you know what it is like to lose your home?’” Jordan testified.
Jordan pointed out that the estate eventually was settled, with Hilenski Sr. remaining on the property and each of Janet Hilenski’s three children receiving approximately $25,000.
Aroostook County Sheriff Shawn Gillen testified that he responded to the call to the crime scene and found Hilenski Sr. dead on the kitchen floor of his home, a pool of blood surrounding him.
He said that he had known Peaslee for “approximately 25 years” and identified him from still images taken from the Hilenski security system and from the video of the shooting.
The video shows an individual run up the steps of the Hilenski home and knock on the door. He then fires several rounds into the home through the screen door and a window in another door. He then ducks, fires more rounds, and runs away.
“I can tell it is James Peaslee by his facial features and by the way he walks and runs,” Gillen testified. “I have spoken to him many times and seen him walk many times.”
Two employees of the former Mars Hill On The Run store also testified that they recognized Peaslee from the store’s security footage. Both said Peaslee came into the store as often as once a day, and they identified him from videos taken from two angles on the evening of the killing.
Communications Specialist William Lovejoy of the Penobscot Regional Communications Center in Bangor testified that he answered a 911 call from Hilenski Sr. shortly after he was shot. The recording was played in court. Hilenski Sr. is only able to tell Lovejoy that he’s “been shot” before the sound of a phone dropping can be heard. Lovejoy said that he stayed on the line and repeatedly tried to get Hilenski to respond, but could not.
State Police Detective Lawrence Anderson told Ellis that when he responded to the Hilenski home, he noticed four bullet holes in the screen door of the house and three bullet holes in the window of the door.
Anderson also walked the jury through an interior video taken from the home at the time of the shooting that showed the victim going to answer the door and being fired at. He is then shown reaching for a landline phone in the kitchen, sitting down in a chair, and quickly thereafter falling to the floor.
Peaslee was arrested in Easton the next morning. He has a lengthy criminal record in Maine dating back to an assault in 1998, according to the state’s Bureau of Identification.
While specifics about incidents are not included in the 35-page criminal record provided by the bureau, it shows that Peaslee has been convicted of multiple crimes in the last two decades, including criminal threatening with a dangerous weapon, assault, terrorizing, unlawful trafficking in scheduled drugs, refusing to submit to arrest, violating bail conditions and violating conditions of probation.
Testimony will resume Friday.