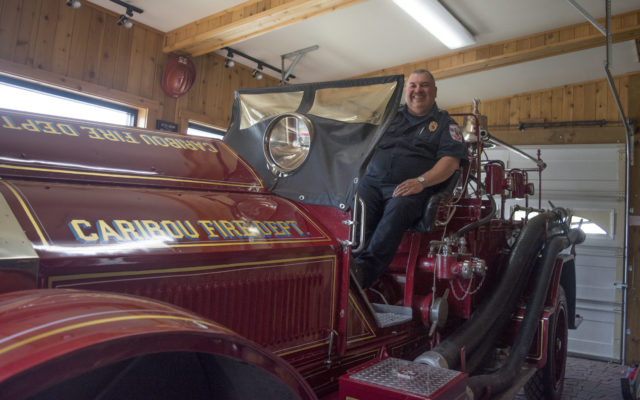 Chris Bouchard • June 10, 2019
Members of the Caribou Fire and Ambulance Department are working to restore two vintage fire trucks, which would bring their complement of antique vehicles to three.

CARIBOU, Maine — Members of the Caribou Fire and Ambulance Department are working to restore two vintage fire trucks, which would bring their complement of antique vehicles to three.

In the 1980s, the department restored a 1922 American LaFrance pumper the city bought when it was brand new. The truck appeared during the city’s annual Memorial Day parade, carrying Captain Danny Raymond and Phil Doody, the oldest living former member of the city’s fire department.

The department’s mission to restore vintage fire trucks began in the 1980s with the 1922 pumper, and Michaud said at the time the volunteers wanted the vehicle to “be in museum condition. They subsequently conducted a frame-by-frame restoration, during which they tore it apart, sandblasted and repainted everything to create a vehicle that essentially looks brand new.

“Back then our trucks had open cabs,” said Michaud, “so you can imagine what the winters were like.”

The 1922 truck has since won several awards across the state, although Michaud says it has been “several years since we left town with it,” a process that involves hauling the truck on a large flatbed.

Since restoring the 1922 truck, Caribou Fire and Ambulance has added two more vintage American LaFrance vehicles: a 1945 ladder truck, acquired from a private owner in 2016, and a 1947 pumper donated by the Prescott Historical Society. Both vehicles were formerly used by the department.

The department is currently hosting fundraisers to aid in the restoration of both trucks, and on June 15 they plan to hold a golf scramble at the Caribou Country Club in which proceeds will benefit the project.

“The town bought these trucks brand new,” Michaud said, “and we’re trying to get them back to their old glory.”

The department has currently raised between $4,000 and $5,000 for the restoration efforts.

Raymond said most of that money has gone into restoring the trucks to a point where they are operational. One of the older trucks had been sitting in a field with no brakes, he said, with windows broken by rocks thrown at the old vehicle.

Now, money raised by the community will go into restoring the original paint jobs and design of the trucks.

Last year, the department enlisted the help of Caribou vocational students and Loring Job Corps to restore the 1945 truck. In 2017, they held a fundraiser at Burger Boy that netted the department $400.

Both Raymond and Michaud said the June 15 golf scramble is the department’s next serious fundraising effort, as it will feature a $10,000 hole-in-one prize. Registration will start at 7 a.m. at the Caribou Country Club and the shotgun start will begin at 8 a.m.

Anyone interested in learning more about the golf scramble can call 493-3933 to register.

For all it does to refresh us, burn energy and keep us sharp, we all need playtime, dogs and cats included. Sharing playtime with pets has the added benefit of strengthening the bond between us, so we better understand one another.
Campaign Corner END_OF_DOCUMENT_TOKEN_TO_BE_REPLACED