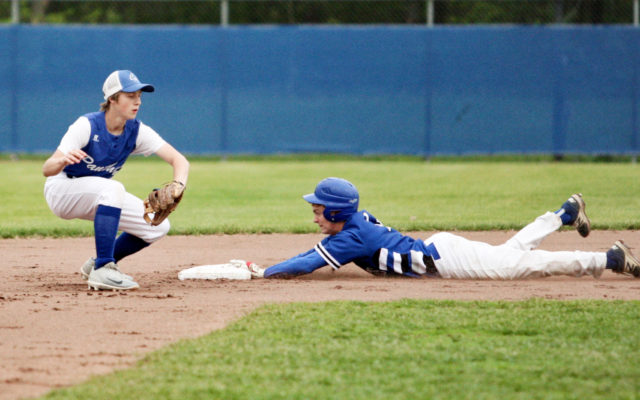 Ernie Clark • June 12, 2019
Top-ranked Central Aroostook inched its way through the first two rounds of the Class D North baseball playoffs, edging Machias in the quarterfinals and Jonesport-Beals in the semifinals by one run each -- both in walk-off fashion.

BANGOR, Maine — Top-ranked Central Aroostook inched its way through the first two rounds of the Class D North baseball playoffs, edging Machias in the quarterfinals and Jonesport-Beals in the semifinals by one run each — both in walk-off fashion.

The pride of Mars Hill endured perhaps even greater angst Tuesday night with the regional championship at stake. The Panthers watched a six-run lead disappear before scoring twice in the bottom of the eighth inning for another walk-off victory, a 9-8 decision over stubborn Hodgdon at Mansfield Stadium in Bangor.

“When they came into the dugout they said, ‘We’re not going to lose this ballgame,’” CAHS coach Mitch Ross said after his team’s fifth victory in which it scored the winning run in its final at-bat. “They just have a determination that I’ve never seen in a baseball team before.”

Senior Lane Grass capped off Central Aroostook’s game-winning rally after Hodgdon scored once in the top of the eighth. He was hit by a pitch for the third time in the game — and 18th time this spring — to force home Malachi Fitzherbert with the winning run. 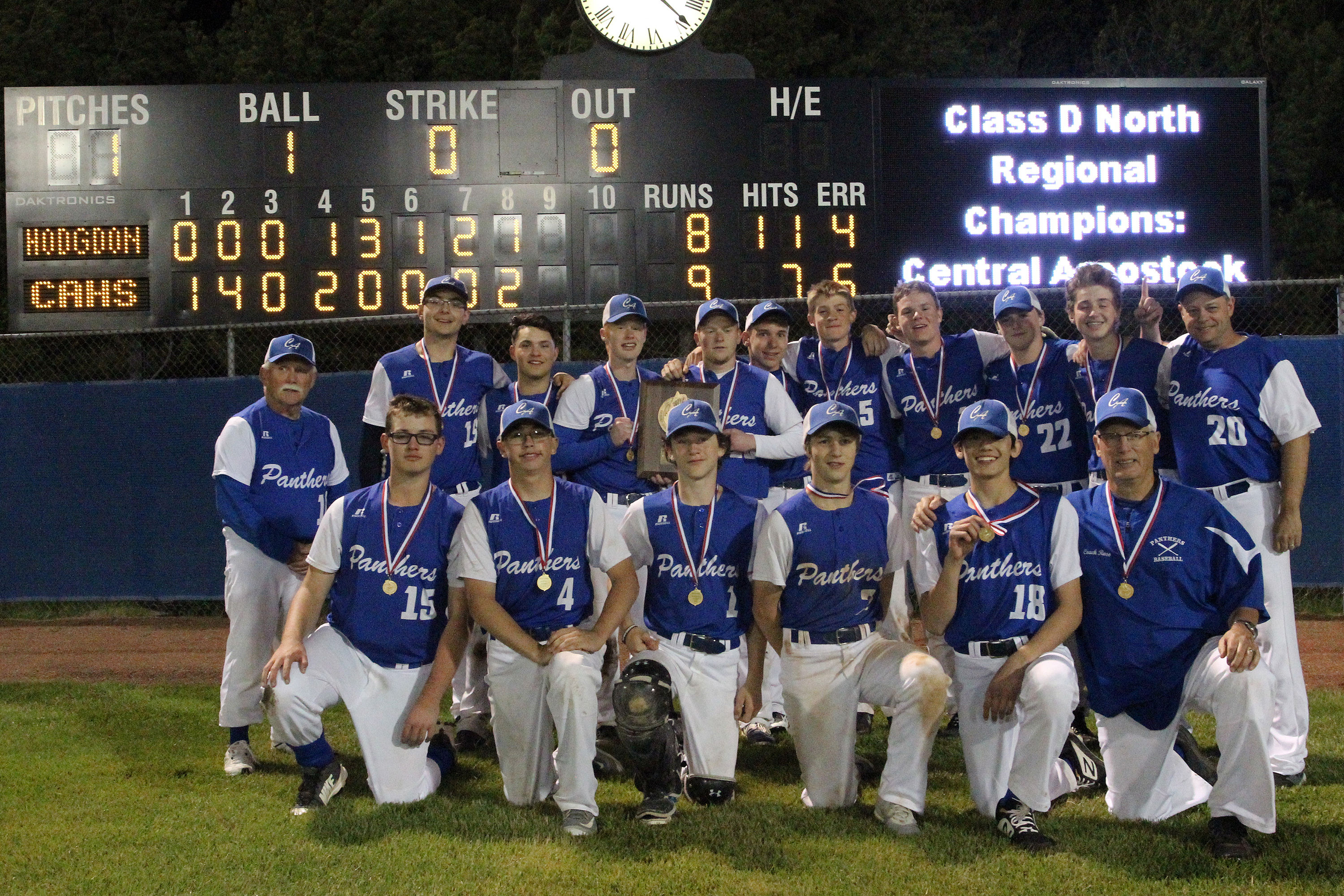 The regional title is the first since 2010 for Central Aroostook (13-4 overall). The Panthers play No. 1 Searsport in Saturday’s 1 p.m. state championship game at Saint Joseph’s College in Standish. The Vikings beat 2018 champion Richmond 11-1 in five innings in the South final.

Third-seeded Hodgdon, with 11 freshmen on its 20-player roster that also includes several athletes from Greater Houlton Christian Academy, ends its season at 13-4.

Hodgdon scored six unanswered runs to erase a 7-1 deficit after four innings, and tied the game with a two-run rally in the seventh. Austin Winslow doubled home Josh Foster and scored on a groundout by Elijah Matheson to tie the game at 7-7.

Coach Seth Dorr’s Hawks took their first lead in the top of the eighth. Andrew Tuttle, the team’s lone senior, reached on a fielder’s choice, advanced on a balk by reliever Brandon Wood and scored on Silas Graham’s hard grounder off the glove of first baseman Ethan Pryor.

The Panthers, scoreless since the fourth inning, finally broke through again in the bottom of the eighth. Stetson Nicholas led off with an infield single to shortstop and Fitzherbert was hit by a pitch. Each runner stole a base before Zaylan Johnson popped a single to center to drive home Nicholas and tie the game at 8-8. He reached second base on the throw home.

Foster came on in relief of Tuttle — who had held Central Aroostook largely in check since coming on in the second inning — and intentionally walked Wood to load the bases with nobody out. 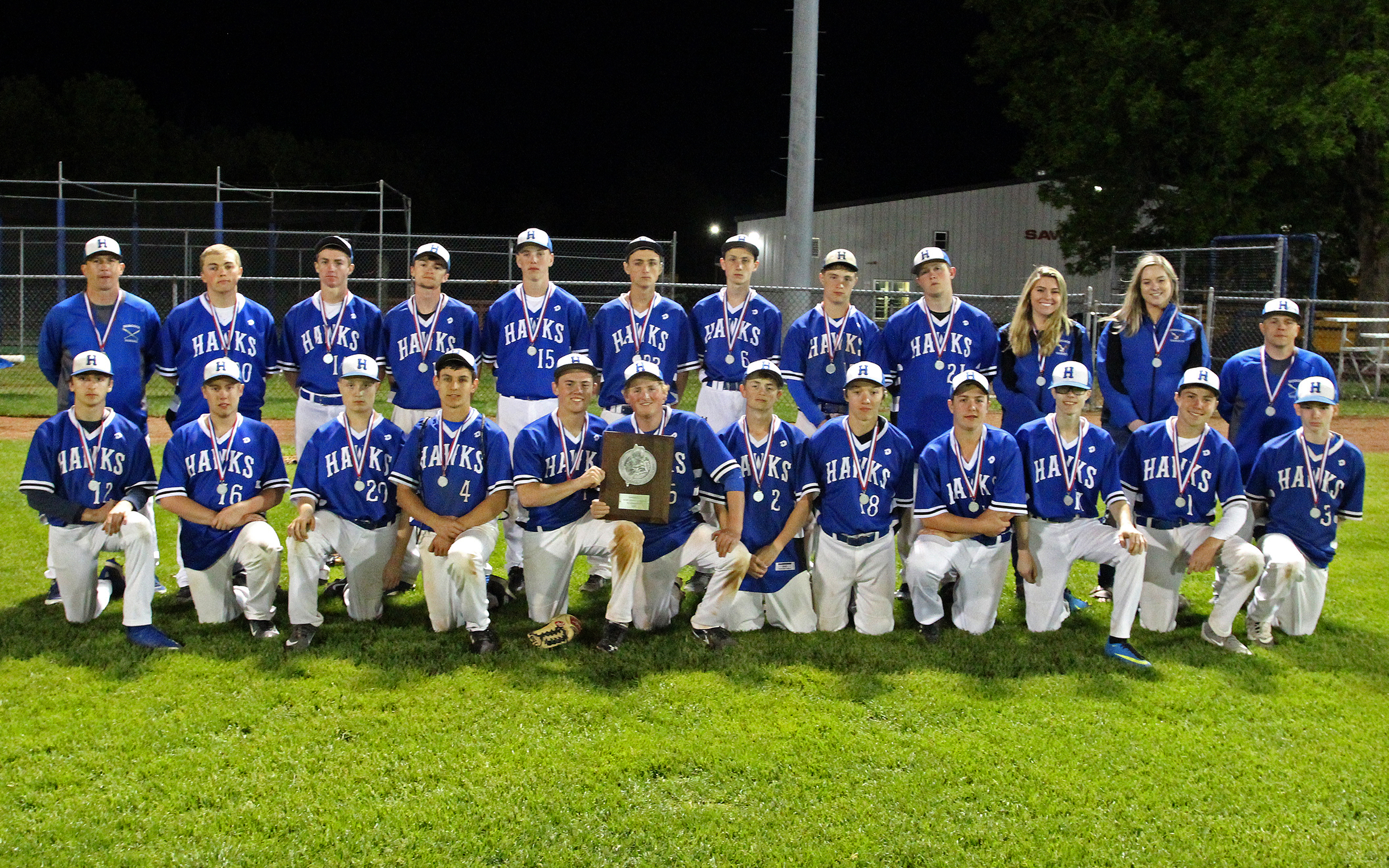 That brought up Grass, who previously had been hit by pitches in the second and fourth innings. Foster’s first pitch, a fastball, hit Grass in the lower left leg.

“He’s just a battler who’s willing to take one for the team and that spurs the other guys to stand in there and do the same thing,” Ross said.

Wood earned the pitching win with an inning of relief work after starter Ben Thomas went the first seven innings, striking out 10 and walking just one, before leaving the game due to the 110-pitch count rule.

Tuttle had three singles and Foster doubled and singled for Hodgdon.

Central Aroostook scored in the first as Ben Thomas hit a hard, two-out single off the glove of Foster at third base and scored from first on an errant pickoff throw.

The Panthers, who defeated Hodgdon twice during the regular season, took control an inning later. They capitalized on three hit batters, a walk and an RBI single by Josh Thomas to build a 5-0 lead.

Hodgdon starter Winslow was lifted midway through that inning after suffering an injury to his finger. Winslow was hit in the hand during the team’s semifinal game against Woodland last Saturday. The left-hander remained in the game at catcher.

Hodgdon got to Ben Thomas for the team’s first run in the fourth on an RBI single by Elijah Matheson, but Central Aroostook answered with Brayden Bradbury’s two-run single to extend its lead to 7-1.

In the fifth, Foster hit a two-run double to deep center and scored on Winslow’s single to ignite Hodgdon’s comeback and make it 7-4.

An inning later, aggressive baserunning by Matheson pulled Hodgdon within 7-5 as the sophomore popped a leadoff double to right and raced home on Nathan Tuttle’s groundout to shortstop.

“I am disappointed for the boys that their history-making run had to come to an end,” Hodgdon coach Seth Dorr said. “However, as a coach I am incredibly proud of the determination and heart they showed in battling back from a 7-1 deficit and forcing extra innings. Most teams would crumble if put into the situation they were. The guts, tenacity, and sportsmanship they showed throughout this season and the Northern Maine Final is a true testament to them as individuals, to their families, and to their community. I know we are all so proud of them.”

Halfway Home Pet Rescue in Caribou has partnered with the Houlton Humane Society shelter for a cat spay and neuter clinic on Saturday, May 30, and Sunday, May 31, in Houlton.
Campaign Corner END_OF_DOCUMENT_TOKEN_TO_BE_REPLACED