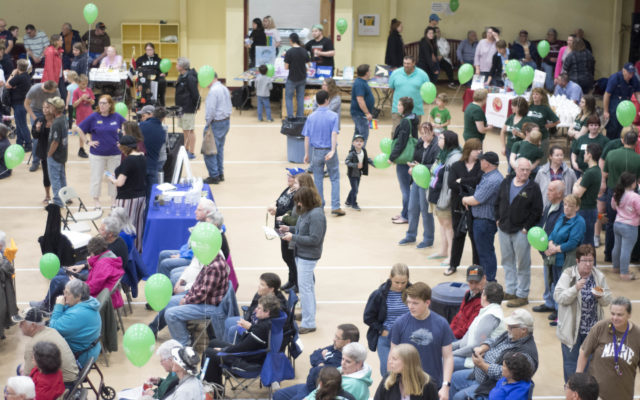 Chris Bouchard • June 24, 2019
The Caribou Wellness and Recreation Center parking lot was packed with vehicles on June 20 for the city’s second Thursdays on Sweden event of the year.

CARIBOU, Maine — The Caribou Wellness and Recreation Center parking lot was packed with vehicles on June 20 for the city’s second Thursdays on Sweden event of the year.

The city normally holds the event outside on Sweden Street, but it had to be held inside due to a 100 percent chance of rain forecast for Thursday afternoon and evening.

Caribou Marketing and Events Coordinator Christina Kane-Gibson said that she unfortunately was not able to attend the inaugural Thursdays event this year, “and this time it’s raining.”

“We make the best of it when it rains,” she said. “There’s a good crowd here and the band, Star City Syndicate, is super enthusiastic.”

Star City Syndicate, a local band consisting of more than a dozen members, is a local favorite among guests, and Kane-Gibson said they showed up early to ensure the “sound was just right.” 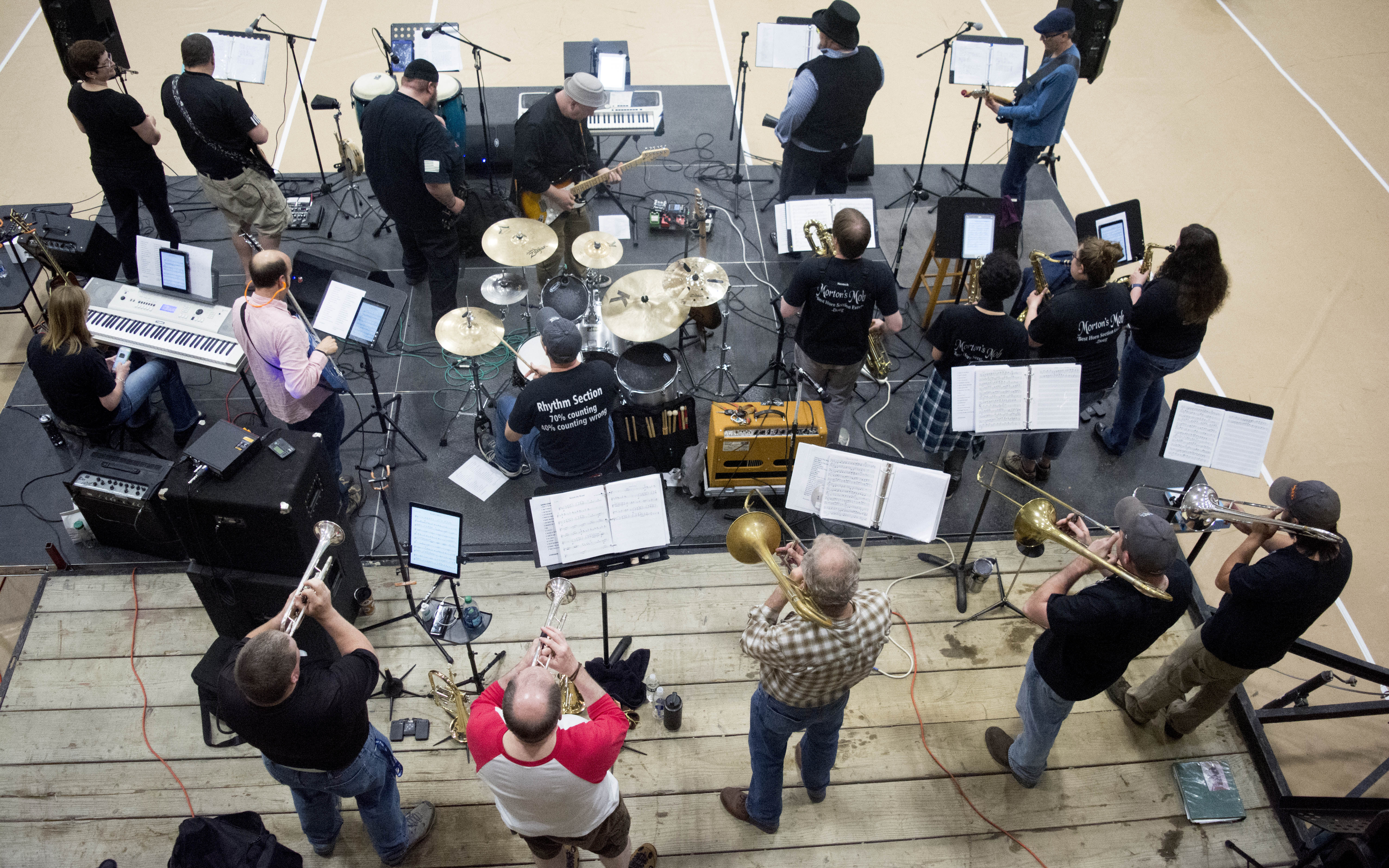 Star City Syndicate performed a plethora of songs for a crowd of roughly hundreds in the Caribou Wellness and Recreation Center gymnasium during a June 20 indoor Thursdays on Sweden event.
(Chris Bouchard)

While the city estimates roughly 1,000 came out for the first event of the year, Kane-Gibson said about half of that number were in the Wellness and Recreation Center just half an hour into the second event.

“We have about 500 here so far,” she said, “and we’re just getting started. We always lose a few vendors when we move inside, but the crowd seems on point considering the size of the building. I’m happy with it.”

In addition to the band, the June 20 event still featured numerous vendors including photo booths, artists and members of a local pride group who are working to start a pride parade in 2020.

City officials had no trouble in calling the rain for this event, as the forecast predicted a 100 percent certainty, however it is often difficult to make the call on days when rain is only a possibility.

On these occasions, Kane-Gibson will meet with Caribou Police Chief Michael Gahagan and Parks and Rec Superintendent Gary Marquis. They will contact the local National Weather Service office and ask for their professional opinions and then discuss amongst themselves whether the event should be brought indoors, making a final decision by 2 p.m. at the latest. 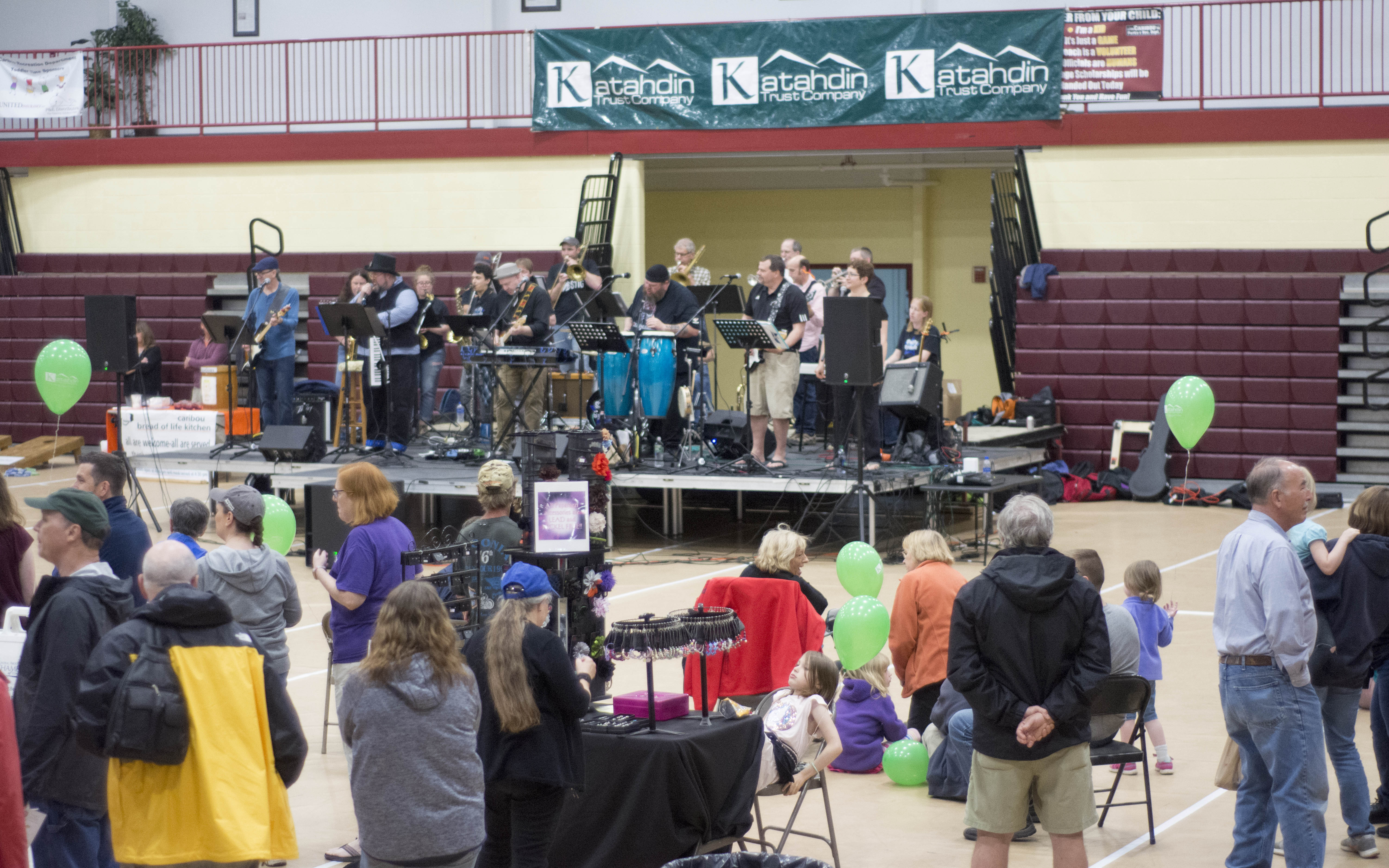 City officials estimate that roughly 500 were in attendance during a June 20 Thursdays on Sweden event that had to be held inside the Caribou Wellness and Recreation Center due to rain.
(Chris Bouchard)

Even though the city was able to call the rain much earlier for this recent event, Kane-Gibson said with notice given at 2 p.m. the event is now a “well-oiled machine” and city officials have little trouble moving the festivities inside.

“Vendors know the process,” she said. “They’ll start emailing or calling me to make plans, and usually I’ll send out a group email to the community and the media to help us let people know. It takes a village to spread the word.”

All Thursdays events now have a theme, and the June 20 festival was titled “Go Green with Katahdin Trust Company,” a local bank that recently celebrated its 100th anniversary.

“We’ve been part of Thursdays on Sweden for a few years,” said Deb Jacques, community relations manager for Katahdin Trust. “Last year, for our 100th anniversary, we started holding special events and giveaways and the City of Caribou named one of their Thursdays on Sweden events ‘Katahdin Trust Night.’ We’re celebrating that tonight as we did last year.”

Jacques said she hopes to see this become a tradition, and that it’s a nice way of thanking the city for its support.

“We get to give back as thanks to the community,” she said, “and it’s a lot of fun.”

Members of the bank in attendance dressed in green to match the company’s branding and green inflatable balloons could be seen throughout the gymnasium. The bank’s booth featured a spinning wheel game with prizes for kids.

“We’re just really proud to be a part of a community effort like this,” Jacques said. “Being involved with the community is our top priority, and we’re really pleased to be here.”

Despite the rain and loss of some vendors, the event still saw hundreds of guests with representation from local musicians, groups, and businesses.

“We make the best of it,” Kane-Gibson said. “Mother nature can’t deter us.”

For all it does to refresh us, burn energy and keep us sharp, we all need playtime, dogs and cats included. Sharing playtime with pets has the added benefit of strengthening the bond between us, so we better understand one another.
Campaign Corner END_OF_DOCUMENT_TOKEN_TO_BE_REPLACED