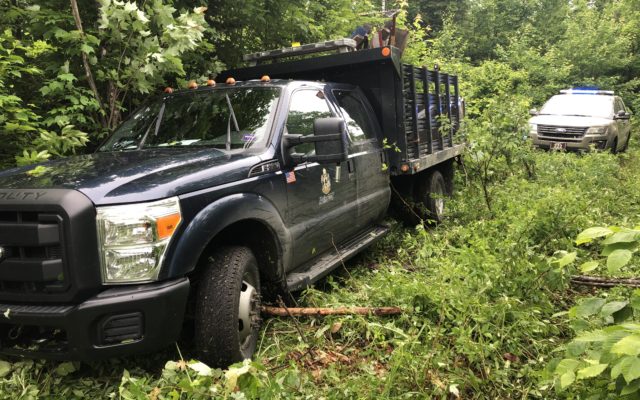 Nina Mahaleris • June 28, 2019
A Washburn woman was arrested on Thursday afternoon after jumping into an unlocked truck belonging to the Maine Department of Transportation and driving down U.S. Route 1.

MARS HILL, Maine — A Washburn woman was arrested on Thursday afternoon after jumping into an unlocked truck belonging to the Maine Department of Transportation and driving down U.S. Route 1.

According to a press release from the Aroostook County Sheriff’s Office, 27-year-old Rachel Donnelly was asked to leave a gas station at the request of the staff.

Deputy Sheriff Reid Clark watched Donnelly exit the store and proceed to climb into the unlocked DOT Ford pickup truck that was parked outside.

Clark followed Donnelly down Route 1 in Mars Hill until she took a turn onto the East Plantation Road, where Clark continued to pursue Donnelly for several miles, according to ACSO.

Donnelly then “drove the pickup through a cable gate,” across from a camp road, police said.

The chase ended when Donnelly got the vehicle stuck and was taken into custody.

Donnelly was brought to the Aroostook County Jail and currently faces charges of unauthorized use of property, eluding an officer, criminal mischief and operating a motor vehicle after license suspension.

Next year's Caribou City Council will include a new member and a longtime councilor thanks to Tuesday's election.
Pets END_OF_DOCUMENT_TOKEN_TO_BE_REPLACED

I know many of you have followed DeeDee’s story. DeeDee had leukemia and was under vet care for the past few weeks. Early one recent morning, she lost her battle with leukemia.
What's Happening This Week END_OF_DOCUMENT_TOKEN_TO_BE_REPLACED