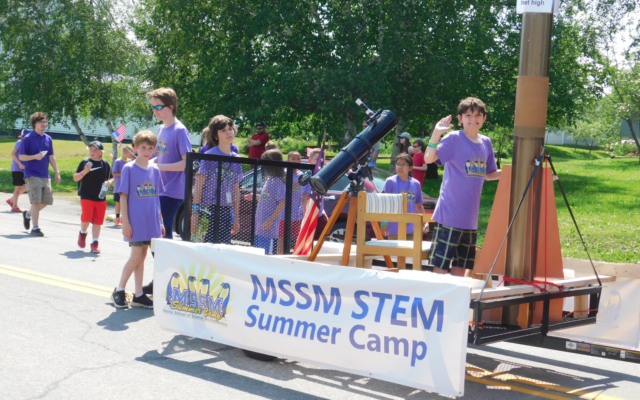 Limestone celebrates Independence Day with a week of activities

Nina Mahaleris • July 5, 2019
Like many other places across the United States, the Fourth of July was undoubtedly a busy one for the town of Limestone.

LIMESTONE, Maine — Like many other places across the United States, the Fourth of July was undoubtedly a busy one for the town of Limestone. Coupled with their own 150th anniversary this year, Limestone citizens took part in celebrations even before Independence Day on Thursday.

Put on by the Chamber of Commerce, Limestone worked up to Thursday’s events with various other activities throughout the week such as the Community Spirit Daze, a kids scavenger hunt, Teddy Bear Picnic, annual Strawberry Shortcake Festival and much more.

Independence Day celebrations started early on Thursday morning with a pancake breakfast at the United Methodist Church at 7 a.m., leading up to an Interfaith Service at Rotary Town Park later that morning.

Residents and visitors alike enjoyed a chicken barbecue hosted by the Limestone Fire Department. Beginning at 10:30 a.m., firefighters sold $10 barbecue plates until they sold out. All proceeds raised were to benefit the department, one firefighter confirmed.

Amongst other food and drink vendors set up in downtown Limestone included 13-year-old Isaiah Rodriguez. For the fourth time this summer, Rodriguez put up his own stand for the parade to sell soda and offer face painting. According to Isaiah’s mother, Leah, he is trying to raise money to attend summer camp this season.

The teen first started out his business with a $40 loan from his parents to purchase sodas and ice cream for his booth, which he usually sets up in Caribou for the “Thursdays on Sweden” events.

Of the events for the day, visitors could also stop by The Closet Frog for complimentary cookies and pink lemonade. The shop, which is operated by the Methodist Church in Limestone, provides clothing to local people at no cost. In return, they suggest donations for whatever amount people can afford.

Like the town of Limestone, The Closet Frog is celebrating an anniversary of their own. This past April marked 10 years the store has been around.

One volunteer, Carol Castle, said that for the last several years, the store has offered free snacks to people in the area. She said it’s not intended to make money but instead to raise “community awareness” of the work they do.

Following the parade, the Chamber also organized a Duck 500 Race on Bridge Street, provided by the Limestone Volunteer Fire Dept. For five dollars, people could purchase a rubber duck to float down the stream for a chance to win the $500 grand prize.

The evening was full of scheduled activities until the fireworks show at 9 p.m., including a potato sack race, a cheesecake bake-off, a pie-eating contest and a corn-hole tournament.

Later in the evening, Wally and The Virginians will perform until 9 p.m. at Trafton Lake.

Independence Day activities don’t end on Thursday. Events will continue through Saturday with a Limestone Community School reunion and a street dance on Friday with the band, Turning Point, scheduled to play until midnight.

Well, normally this time of year we would be gearing up for our annual “Paws for the Cause” walk.  Families and their furry companions would be showing up with generous pledges in hand, ready to enjoy an easy two-mile walk and then some welcomed refreshments afterward.
Campaign Corner END_OF_DOCUMENT_TOKEN_TO_BE_REPLACED