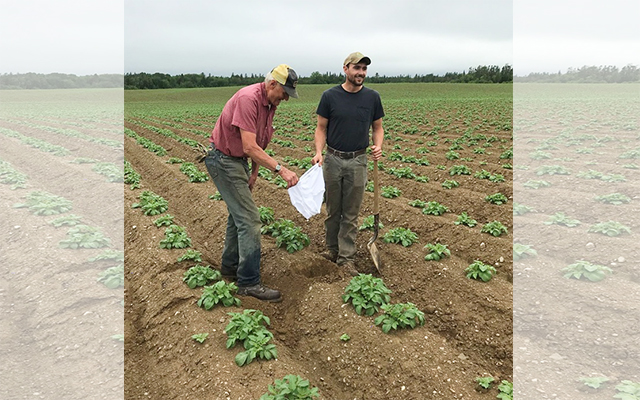 Farmers in Aroostook County are ‘soiling’ undies for science

About a dozen farmers and gardeners around Aroostook County are participating in the project by burying all-cotton pairs of underwear in their gardens and crop fields, and planning to dig up what’s left of them in two months.

“The idea is that the more alive your soil, the more the undies will decompose,” said Angela Wotton, district manager at Southern Aroostook Soil and Water Conservation District. “It’s sort of a fun experiment. It’s a good visual for soil health.”

Numerous agricultural conservation organizations around North America have adopted the “Soil Your Undies” demonstration campaign as a way to get farmers and the general public thinking about soil health.

The more biologically active soil is, with a diversity of bacteria, fungi, earthworms and microorganisms, the quicker the cotton or other natural materials will break down. Agricultural fields with more soil life can better support crops and retain organic matter and nutrients over the long term.

In the last decade, the USDA’s Natural Resources Conservation Service has helped more farmers adopt soil-building strategies such as cover crops planted over multi-year rotations of cash crops like potatoes and grains.

The demonstration in Aroostook County is a collaboration with the local offices of the Natural Resources Conservation Service and the Soil and Water Conservation Districts of Southern Aroostook, Central Aroostook and the St. John Valley.

Wotton credits the start of the initiative to Kelsey Ramerth, soil conservationist at the St. John Valley Soil and Water Conservation District. The St. John Valley team will be digging up the underwear to display during the annual Ploye Festival Aug. 9-11 in Fort Kent.

Six farms are participating in Southern Aroostook from Benedicta to Bridgewater, representing a potato field, a cattle pasture, an organic oat field, and a no-till cover crop field, Wotton said.

“We put the challenge out there on Facebook and we’ve had other people get involved and they’re trying it on their own farms,” Wotton said. The underwear will be unearthed in September and displayed at the district’s office in Houlton.

“Our ultimate goal and our focus has been on building soil health. I feel like a lot of farmers in Southern Aroostook plant a fall or winter cover and try different combinations of cover crops. A picture is worth 1,000 words. It shows how alive the soil is,” said Wotton. “The farmers in our district have made a lot of gains. They’re doing a lot of work on their farms to focus on soil health.”

Next year's Caribou City Council will include a new member and a longtime councilor thanks to Tuesday's election.
Pets END_OF_DOCUMENT_TOKEN_TO_BE_REPLACED

The snow and the cold weather has arrived. If we listen to everyone it is going to be a difficult winter.
What's Happening This Week END_OF_DOCUMENT_TOKEN_TO_BE_REPLACED