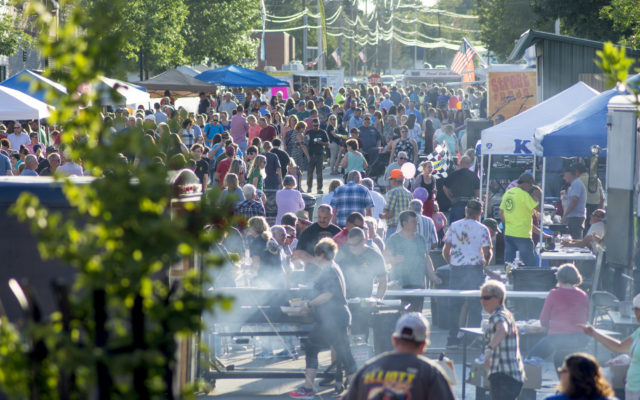 Caribou Days kicks off with special Thursdays on Sweden event

The event also kicked off Caribou’s three-day Caribou Days event, which features a parade and numerous activities hosted within the city.

The Adam Ezra Group, based in the Boston area, came up once again for this year’s street festival. Caribou Marketing and Events Coordinator Christina Kane-Gibson said Ezra is among the city’s favorite musical acts during the biweekly Summer event series. 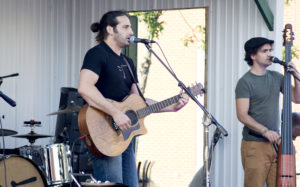 In addition to the regular festivities, local NASCAR race car driver Austin Theriault made an appearance and signed autographs and met with fans.

Kane-Gibson said many of the Caribou Days traditions, such as tie-dying T-shirts, have been happening for more than two decades and have been consistently popular with the community.

Members of Caribou’s fire and police departments also came together to offer barbecued burgers, hot dogs and french fries as part of the “Guns and Hoses” project, in which money raised will go toward youth programs within the community.

Caribou Police Chief Michael Gahagan manned a large grill with dozens of hot dogs as he explained that the two departments have been cooking food at the street festival since it began more than half a decade ago.

“Last week, we donated the money to the Mason’s bicycle program,” he said, referring to a program in which local Masons present bicycles to school children for meeting reading requirements.

“It’s been great for the community,” he continued, adding that during the last Thursdays event, “Guns and Hoses” sold 230 hamburgers, 250 pounds of french fries and 20 pounds of hot dogs.

“This year has been great,” Gahagan said. “We got rained out once, but the rest of the time we’ve been right here down on Sweden Street.”

Looking ahead, the city has two more Thursdays events planned for the summer: one on Aug. 15, in addition to an Aug. 29 “Summer send-off.”

“We have a karaoke contest next week,” Kane-Gibson said, “and once the contest is over we let the crowd come up and pick a song,” adding that this event will also feature a “dunk tank” hosted by Miss Jordyn’s Child Care and Preschool, in which guests can dunk members of the Caribou Vikings basketball team.

For the finale, Kane-Gibson said the Rock Dox, another local favorite, will provide music and the tractor train will make a return.

“We’ve had amazing volunteers from the Public Works and Rec Department,” she concluded, “and we have city hall staff out here in their own booth. It’s really a great event for families, for our staff and for the community.”

Maine is more than eight months into Medicaid expansion under the federal Affordable Care Act and trends around who is enrolling and where they live are starting to emerge, bucking some expectations and pointing out access challenges.
Pets END_OF_DOCUMENT_TOKEN_TO_BE_REPLACED