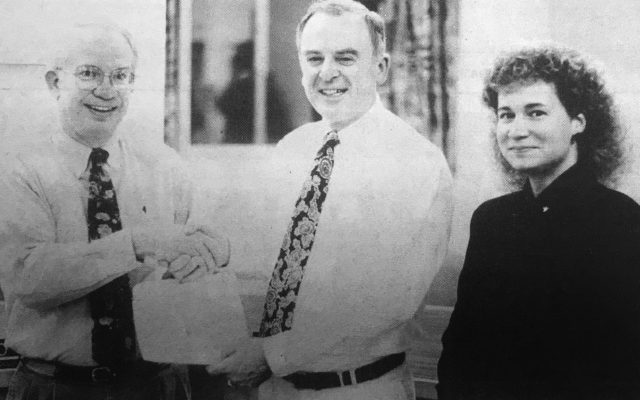 Contest — A novel contest took place recently on the farm of Zepheniah Parks of White Settlement, in which Mr. Parks’ two sons were the contestants. One of the boys picked up seventy-five barrels of potatoes in five hours and his brother, in order to go him one better, went to work and succeeded in picking his seventy-five barrels in four hours and forty-five minutes. This record is regarded as extraordinary good work by those who know.

Barn party— Mrs. A. H. Fogg gave a barn party Saturday evening in honor of Miss Elsie Manaur and Miss Deborah Dunn. There were about sixty present at this social function, and a most pleasant time was enjoyed. Dancing was enjoyed in the barn, which has recently been fitted to a hardwood floor, sheathed and painted white. Those who did not care for dancing retired to the house where whist was indulged in.

Added fixture — L. S. Purington has recently added another beautiful oak counter showcase to his already attractively equipped store which is now fitted with wall, floor and counter cases all of the same design.

Accepted position — R. H. Brittain for a number of years was the American Express agent in this town, and since his discharge from the U. S. service having been connected with the auditors department of the American Railway Express, has accepted a position as assistant cashier of the Farmers National Bank, and will take up his duties Oct. 1, 1919.

Awarded Gold Pass — Conductor George E. Wibberly completed 40 years of continuous service with the Bangor and Aroostook Railroad Sept. 19 and when he came in from his regular run and reported to the office of the Superintendent, was presented with a gold pass emblematic of the completion of four decades of employment. The pass was the gift of Wingate F. Cram, president of the Bangor and Aroostook and the presentation was made by Supt. Henry H. Dow. Both officials extended to Mr. Wibberly their commendation for this long years of service and expressed the wish he would enjoy the use of the gold pass and also remain for many more years with the railroad.

A gift for GI’s— The Woman’s Christian Temperance Union has announced a national fund-raising campaign to send Pepsi-Cola to G. I.’s in Vietnam. Pepsi-Cola Company is providing he Pepsi to the WCTu at wholesale. In addition, they are underwriting the cost of posters and other promotional materials. Supervising the fund-raising containers and collections is a committee headed by Mrs. Pearl Benn and Mrs. Orman Noble.

Job well done — Mark Cassidy congratulates Carl Carpenter for 30 years of service with the A.E. Staley MFG. Co. Carpenter over the years has worked in the warehouse, process, maintenance departments and is a high pressure boiler operator.

At the Houlton Humane Society, we take adopting the cats and dogs in our charge very seriously.
Campaign Corner END_OF_DOCUMENT_TOKEN_TO_BE_REPLACED