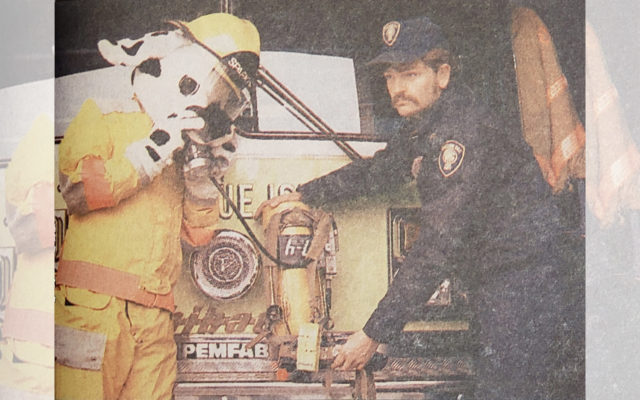 Compiled by Yvonne Tardie, Special to The County • October 8, 2019
F.B. Thompson, besides the large business he had conducted in the Monumental Works, had done quite a stroke of war work farming during the season.

Farming season — F.B. Thompson, besides the large business he had conducted in the Monumental Works, had done quite a stroke of war work farming during the season. He hired a piece of land on the Mary Dudley farm and from 17 acres, raised 425 bushels of first class wheat which is all threshed and stored. He also raised 8 acres of buckwheat.

War bond — At a Columbus Day Banquet for the Knights of Columbus members and their wives and friends, in the dining room of the Northeastland Hotel, the Presque Isle Council K. of C. No. 2524 had the honor of receiving a letter of congratulations and a $100 War Bond from the Supreme Council Knights of Columbus for being one of the five Councils in the United States to win a $100 WAr Bond for the 1943 membership drive. Grand Knight of the Presque Isle Council Edward Gagnon also received a beautiful 17-jewel wrist watch for his leading part in the membership drive.

New business in town — Mr. and Mrs. Robert E. McKinley of Braintree, Mass., arrived in Presque Isle to remain permanently. Mr. McKinley and his associates were giving estimates on commercial and residential jobs of painting and decorating. Mrs. McKinley was the former Dorothy Downing, daughter of Mrs. Lillian and the late N. W. Downing of this city.

Business manager — The former chief of administration for the State Department of Civil Defense and Public Safety was named business manager for A.R. Gould Memorial Hospital, according to Jackson Browne, administrator. William Keliher, who also had worked in supply and inventory control for Augusta State Hospital, assumed his duties in Presque Isle. A 1951 graduate of Boston College, Keliher majored in education and then taught five subjects in School Union 16 for three years. He also served as principal and coach.

Local principal receives national award — Richard A. Durost, principal of Presque Isle High School, was appointed to a one-year term as chairperson of the National Association of Secondary School Principals (NASSP) Committee on the Smaller Secondary School. The seven-person committee worked on improving learning opportunities for students and professional development for principals and assistant principals of small secondary schools. NASSP is the nation’s largest school leadership organization, representing 42,000 middle-level and high school principals and assistant principals, as well as university professors. The Presque Isle resident believed funding was the major challenge to education in Maine.

At the Houlton Humane Society, we take adopting the cats and dogs in our charge very seriously.