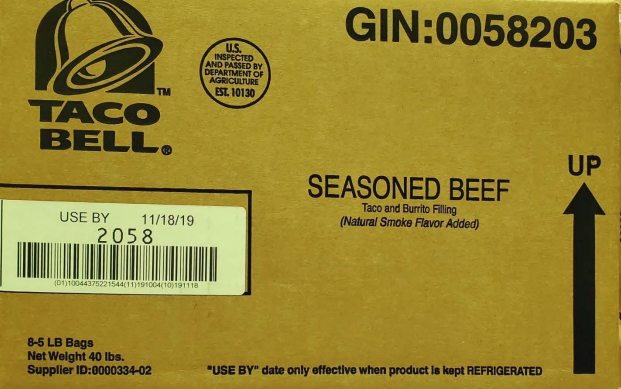 Chris Bouchard • October 15, 2019
Kenosha Beef International, based in Columbus, Ohio, recalled “an undetermined amount” of meat that may be contaminated with metal shavings, according to a USDA press release.

COLUMBUS, Ohio — Kenosha Beef International, based in Columbus, Ohio, recalled “an undetermined amount” of meat that may be contaminated with metal shavings, according to a USDA press release.

As of Oct. 14, “there have been no confirmed reports of adverse reactions due to consumption of these products,” the release stated.

The USDA has deemed this a Class 1 recall, which they defined as “a health hazard situation where there is reasonable probability that the use of the product will cause serious, adverse health consequences or death.”

The release states that the contamination occurred in “Taco Bell seasoned beef taco and burrito filling” produced on “various dates” from Sept. 20 to Oct. 4. The potentially contaminated products were shipped in cases containing eight five pound bags of the meat product with the establishment number “EST. 10130” written outside the box.

The cases were shipped to five distribution centers and subsequently delivered to “restaurant locations nationwide,” according to the release.

The FSIS is urging any restaurants with products bearing this number to immediately discard or return them.

It is currently unclear if the product was delivered to the Taco Bell located in Presque Isle. Attempts to reach the restaurant have been unsuccessful.

Any consumers with further questions about the recall are being asked to contact Dennis Vignieri, President and CEO of Kenosha Beef International at (262) 859-2272, ext. 1205.

This story may be updated.

Only one member of Maine’s congressional delegation had come out in favor of impeaching President Donald Trump ahead of House Speaker Nancy Pelosi’s Tuesday announcement that the Democratic-led House of Representatives would begin an impeachment inquiry.
Pets END_OF_DOCUMENT_TOKEN_TO_BE_REPLACED

We think a cat can make for the best pet in the world. To truly love a cat, you must learn to accept them for what they are -- unpredictable and quirky, which is something unique and unlike any other pet.
Campaign Corner END_OF_DOCUMENT_TOKEN_TO_BE_REPLACED