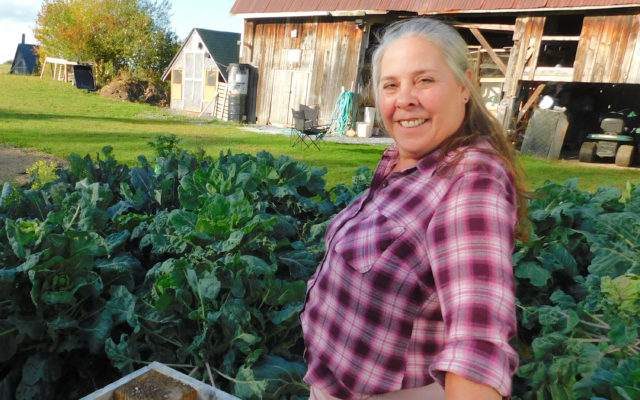 Nina Mahaleris • October 16, 2019
Linda Rodd of Mapleton has been a small family farmer for most of her life -- with the exception of the 20 years she spent living in apartments in bigger cities.

Linda Rodd of Mapleton has been a small family farmer for most of her life — with the exception of the 20 years she spent living in apartments in bigger cities. But those days are long gone for her. Now, Rodd spends most of her time working her own land and sharing her love for sustainable living with the younger generation of farmhands.

Growing up in Concord, New Hampshire, Rodd learned from her parents how to grow or build whatever they needed to get by. On a 10-acre plot of land, in a farmhouse that her parents bought for $10,000, Rodd grew up learning to live off what they had.

“I learned everything from Mom,” she said. The only two women of their family, Rodd and her mother were expected to cook, clean, look after the animals and tend to the garden. Her father and brothers took care of the farming equipment. Come harvest time, the family had enough food to survive the year and they cooked all their meals atop a big woodstove with a wood-fired oven.

In the early years, their farmhouse was nothing luxurious, but with lots of effort, Rodd’s parents made it a home. It had no heat, plumbing or water, and for the first 10 years, the family lived on the first floor, as the rest of the house needed renovations.

That’s how Rodd became who she is today: watching her parents rebuild the farmhouse by themselves with little professional training but a lot of elbow grease.

Today, she wants to share her passion for sustainable living with young people. For some time, an idea has been on her mind to build an outdoor kitchen and start a program for kids to learn how to live sustainably.

She doesn’t want any money in return for the program, she said. She just wants kids to have the experience of producing their own food.

“I just want these kids to learn something,” she said.

For Rodd, growing up in a small farming family meant that they worked for just about everything they had. While they weren’t rich by any means, they always had enough food, Rodd said.

But that was a different time. Now, kids are learning less and less about sustainability in school, she said.

Working as a head cook at Presque Isle Middle School, Rodd has seen first-hand how little kids know about where their food comes from and how they can produce it themselves, which sparked the idea to share her love for sustainable living.

She explained how the need for small farming is an important part of taking care of one’s health, especially for people who want to eat natural foods, free of pesticides. Even learning how to grow small herbs and plants is worthwhile and can work just about anywhere, she explained.

“You can be in a small area and still grow your own food,” she said.

Using the skills she learned from her parents, Rodd cleared out the brush behind her Mapleton home that she bought in 2001, to make room for her vision of a small but plentiful garden. She tilled the land herself until it was ready for planting.

During the growing season, she maintains three plots of land where she grows brussel sprouts, onions, string beans, raspberries and much more. She has a hive of bees that gift her with natural honey and chickens for fresh eggs and meat.

Soon, she’s going to be expanding her farm to include pigs. She has her own compost pile and collects rainwater in a barrel that she uses for her garden.

With the concept of building her own outdoor kitchen, Rodd wants to show not only kids but adults, too, that they can produce fresh food for their families. Her dream of sharing her skills with others is a testament to her sustainable lifestyle,

In this way, Rodd might just be able to pass on the lifelong lessons her mother once passed along to her.

For all it does to refresh us, burn energy and keep us sharp, we all need playtime, dogs and cats included. Sharing playtime with pets has the added benefit of strengthening the bond between us, so we better understand one another.
Campaign Corner END_OF_DOCUMENT_TOKEN_TO_BE_REPLACED