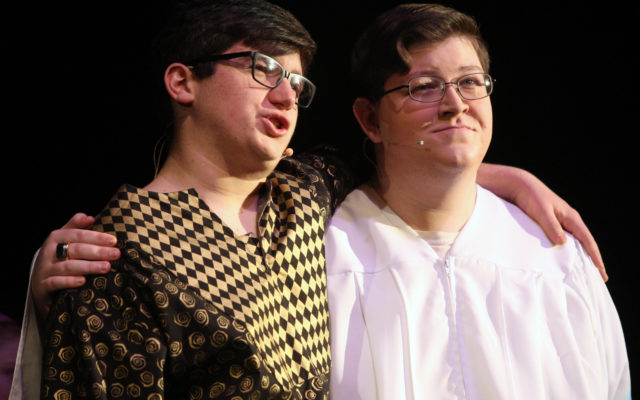 Joseph Cyr • November 26, 2019
The streets of Paris were brought to the Houlton Community Arts Center for four shows of “The Hunchback of Notre Dame” by Houlton Middle-High School students Thursday through Sunday.

HOULTON, Maine — The streets of Paris were brought to the Houlton Community Arts Center for four shows of “The Hunchback of Notre Dame” by Houlton Middle-High School students Thursday through Sunday.

Directed by Kevin Mania, the production was based on the Victor Hugo novel and songs from the Walt Disney film of the same name.

“I couldn’t be happier with how well the musical turned out this year,” Mania said. “This was the first musical that I have directed, and I had a great team with Jamie Sewell and Mike Hutchinson by my side.”

The production capped several months of rehearsals that began with substitute teacher Haven Rhoda helping out with the music department from September and October. New choral director Nick Foster came on board in the last few weeks of the production to help.

“The kids here in our school that were part of the musical were just great to work with,” Mania said. “They are always ready to try something new, and just go with the flow.  We work hard to bring a great product to our community. For some of these kids, this is their happy place, being on stage and performing. It’s such a great feeling to watch them grow and give it their all.”

Jon Smith, a senior, had the daunting task of playing Dom Claude Frollo, a character who first appears to be righteous, but winds up being the villain of the show. Smith showed a powerful voice, particularly on the song “Hellfire.”

Ellie Grant, a sophomore, was dazzling as the character “Esmerelda,” showing both strong vocals and dancing abilities as the gypsy character who steals the hearts of several characters in the production.

The large ensemble cast featured a strong mixture of returning veteran actors and many newcomers from grades six-12.

“Every year our district is given a word of the year, something to strive towards and work hard to achieve,” Mania said. “This year, (Superintendent Ellen) Halliday presented us with the word ‘Grit.’ It is the ability to persist in something you feel passionate about and persevere when you face obstacles. We all had obstacles to overcome to bring this production to the stage. We all had our fears to conquer and we nailed it. We set the bar high, and we are going to continue to strive for the highest achievements that we can do.”

Halfway Home Pet Rescue in Caribou has partnered with the Houlton Humane Society shelter for a cat spay and neuter clinic on Saturday, May 30, and Sunday, May 31, in Houlton.
Campaign Corner END_OF_DOCUMENT_TOKEN_TO_BE_REPLACED