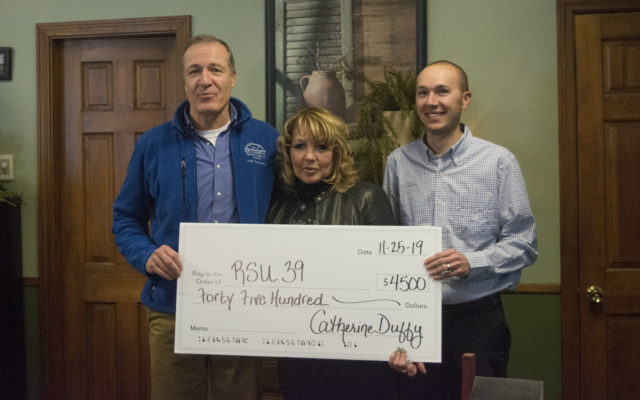 Chris Bouchard • November 29, 2019
The staff at Progressive Realty recently donated $4,500 toward the new Caribou Community School project, which is slated for completion next August.

CARIBOU, Maine — The staff at Progressive Realty recently donated $4,500 toward the new Caribou Community School project, which is slated for completion next August.

The money was presented to “Friends of Caribou Schools,” a non-profit organization founded to help raise money for approximately $2 million worth of locally funded additions to the new school for increased gym and music room space that voters approved in 2017.

Progressive Realty owner Cathy Duffy was inspired to donate on behalf of her late father Gerald “Gerry” Duffy, who was a teacher and coach at the school for more than 30 years.

The donation was also made on behalf of former Teague Park Elementary School teacher Doris Chamberlain, whose daughter Ann Jepson works at Progressive Realty as an associate broker along with her son Arik Jepson, who is also an associate broker.

Duffy decided to set aside $100 from every sale until they had collectively raised $4,500. Once the money was raised, she called Friends of Caribou Schools Co-Chair Sam Collins to let him know about the donation.

Collins said he was “pleasantly surprised” when Duffy called to let him know about the donation.

“We’re absolutely thrilled that Cathy and Progressive Realty decided to make this donation on behalf of her father and Doris Chamberlain, who were both teachers in the school system for decades,” Collins said.

He added that their donation illustrates the importance that members of the Caribou community put on education, and how they “prioritize education and the youth.”

“This has enabled us, as many people are aware, to have a second gym to fit the needs of not only the educational and programming elements in the school, but also for community events that take place in the gymnasium after hours,” he continued.

With multiple sports teams from across the region coming to use the gym, Collins said the increased space will be “extremely well-utilized,” adding that the additional music room space and arts offerings made possible via this extra funding are another example of the community’s investment in the youth.

Collins said the non-profit has received approximately $600,000 in community donations so far, and that they are still seeking donations. With more than half a million dollars raised, the organization is roughly a quarter of the way to funding additions to the new facility.

“It’s a significant testament to how people in Caribou feel about the education of the youth,” Collins said of the progress in fundraising efforts.

Collins said the best way to donate to the organization would be to either call the superintendent’s office at 207-496-6311 and speak to Executive Administrative Assistant Laurie Chapman, or to mail any checks or money orders to RSU 39 at 75 Glenn St., Caribou ME, 04736.

Duffy, whose office is across the street from the new school, said it has been exciting to have a front row seat to the new school construction.

“I went to school in Caribou, and graduated in 1980,” she said. “It’s just exciting to see this project, and also a new Dunkin’ next door. Caribou is growing.”

For all it does to refresh us, burn energy and keep us sharp, we all need playtime, dogs and cats included. Sharing playtime with pets has the added benefit of strengthening the bond between us, so we better understand one another.
Campaign Corner END_OF_DOCUMENT_TOKEN_TO_BE_REPLACED