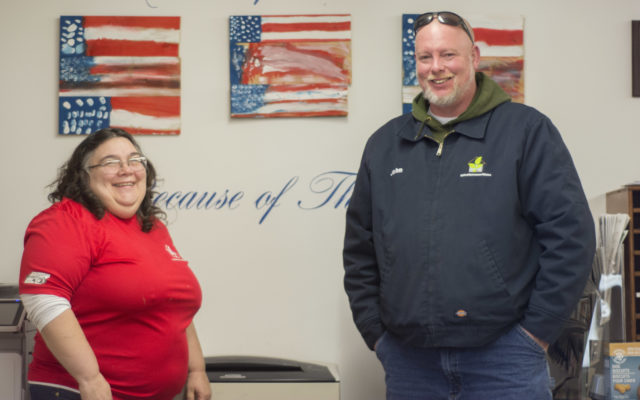 Chris Bouchard • December 19, 2019
The Dahlgren-Skidgel Farm of Hope, a four-cabin facility in Caribou that houses homeless veterans and their families, has made great strides over the past three years.

CARIBOU, Maine — The Dahlgren-Skidgel Farm of Hope, a four-cabin facility in Caribou that houses homeless veterans and their families, has made great strides over the past three years.

The shelter went from being a concept in 2015 to a reality the following year, helping veterans find a place to stay and get back on their feet. Now officials with the United Veterans of Maine, the organization behind the facility, are planning a new fundraiser for 2020.

United Veterans of Maine Finance Director Karen St. Peter said that with creditors paid off, the cost of a “bed night,” or for an individual tenant to stay overnight in one of the eight beds, is $20 as opposed to $24.

In mid-2019, the facility also held a grand opening for two cabins, celebrating the completion of all duplexes at the Washburn Street facility. St. Peter said the Farm of Hope is equipped for “up to 2,900 bed nights” at capacity.

Next year, the fundraiser will be called “$20 in ‘20,” or the “Keep the Lights on” campaign. The facility’s annual electric costs are roughly $12,500, according to St. Peter.

All together, St. Peter and United Veterans of Maine President John DeVeau, who also serves in the State House as a representative, estimated that the facility’s yearly costs are between $68,000 and $72,000.

To meet these needs, St. Peter has not only reached out to local businesses but also written several grants. Currently, she is in the process of writing a grant that would secure funding for a year’s worth of electricity, which is a little more than 20 percent of the facility’s entire budget.

“It’s just a matter of learning when they’re available, and going out there and searching every day,” St. Peter said of the grant-writing process.

“[While] it’s wonderful to be able to say that we’re not state or federally funded, and we can do things on our own, it’s a very stressful situation for Karen,” said DeVeau.

Looking ahead, DeVeau said one of the organization’s goals is to find “a structured funding source” for the facility “so we don’t have to only rely on the goodwill of our community.”

Currently, DeVeau said United Veterans of Maine is working with different veteran organizations, from the American Legion to the Veterans of Foreign Wars, Disabled American Veterans and Veterans Affairs, to the elderly crisis portion of the Department of Health and Human Services.

“Congressman Jared Golden has also visited,” DeVeau said, adding that United Veterans of Maine is always open to visits from congressional staff “so they can have a better understanding of what we’re doing here.”

In the meantime, DeVeau said the organization is working to keep the lights on through local fundraising efforts like “$20 in ‘20,” a task that he says has become slightly easier now that more in the community are aware of homeless veterans in Aroostook County.

He said that while some in the area at first doubted the need of a shelter for veterans, many “are now coming on board.”

“It’s great that we have it. It’s bad that we need it,” said DeVeau

So far, 14 veterans have successfully transitioned out of the facility and onto either a job or a new living situation. One tenant, according to DeVeau, will be leaving for a job in Alaska next year.

“While some won’t go back to employment, they will transition back to their own life, and that’s what we’re here for,” DeVeau said. “Not just to help them get a job, but to get them to a place where they can live on their own.”

To date, three tenants have been removed from the facility for code of conduct violations. DeVeau said that all tenants are made aware of the rules prior to relocating to a duplex.

“They choose, like any of us in life, to do good or bad,” he said. “The choices they make determine if they stay and transition or if they leave under different circumstances.”

More than anything, both St. Peter and DeVeau said they are immensely thankful for all of the help and donations they have received, particularly when building the cabins through mostly volunteer labor.

“Aroostook County still has a part of that old school way of life from the ‘50s,” DeVeau said. “Where you can go to your neighbors and ask for a cup of sugar to bake an apple pie and it’s no problem. People are still willing to help out, and that’s one of our benefits up here. We live in probably one of the greatest communities as far as community help is concerned.”

Gubernatorial candidate John Glowa said that he wants to spur government reform that truly creates a system of, by and for the people when he visited Presque Isle City Hall.
Pets END_OF_DOCUMENT_TOKEN_TO_BE_REPLACED

Many of you have been asking about our super popular “Toast to the Animals” celebration. After several COVID-19 cancellations and not being able to host this great fundraiser, we are finally ready to celebrate the animals once again and help support the Central Aroostook Humane Society.
What's Happening This Week END_OF_DOCUMENT_TOKEN_TO_BE_REPLACED